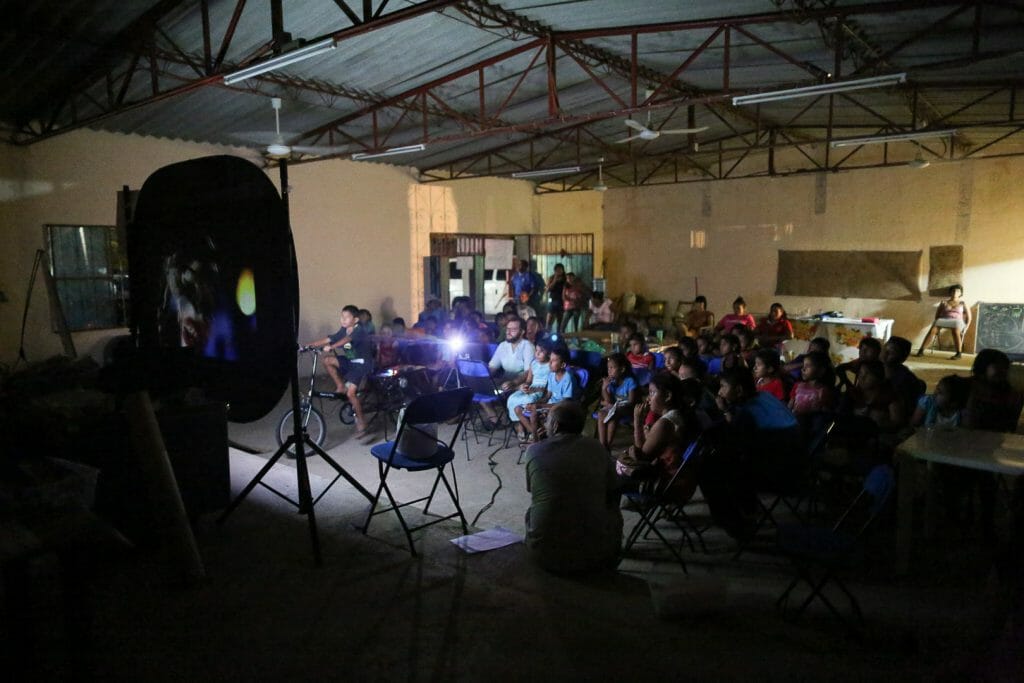 .
In the heart of Oaxaca, Mexico a volunteer project called Ciclocinema is bringing joy, the basics of filmmaking, and environmental education to scores of children. The group travels from village to city collaborating with school children at every stop to make lively stop motion animations. Ranging from narrative to abstract, the content and direction of the animations are decided upon entirely by the children. Once their masterpiece is complete, the kids present the film to their community with an interesting twist: the entire film premiere is powered by a Haul-a-Day that generates electricity. 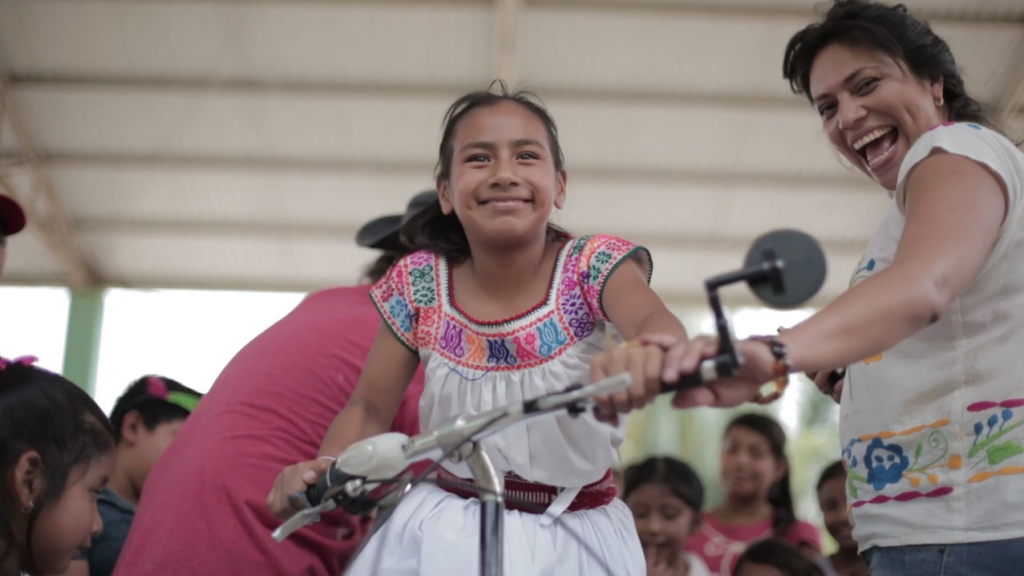 Filmmaker, producer, and educator Claudia G. Covarrubias heads up the team of animators, cultural promoters, and impassioned volunteers behind this brilliant project. As the President of an organization called Cine Bajo El Cielo, Claudia’s mission is to bring the joys of creating and watching cinema to underserved communities across Mexico. “We believe in film as a social change tool, we want to empower communities to create and share their local stories, art, ideology and culture. We realized that we have a lot to learn from them. We decided to focus on children because they express directly without hesitation what they think and what they feel. It is important to strengthen their creativity and develop new skills in film art.  We are also committed to raising awareness about environmental issues that effect local communities. We use films made at our workshops to inspire alternatives as we face global warming, water supply problems, and others issues.”

Ciclocinema is a new collaboration between Cine Bajo El Cielo and an animation studio called Animatitlán. While this project is a new one, for Claudia the practice of using Haul-a-Days to generate electricity is not. Cine Bajo El Cielo has been using Haul-a-Days to power community film watching for over three years: “We found it useful in the Mexican context since there are many places without, or with limited, electricity.  The first time we made an outdoor screening people reacted with enthusiasm and were very curious of how the system worked.” 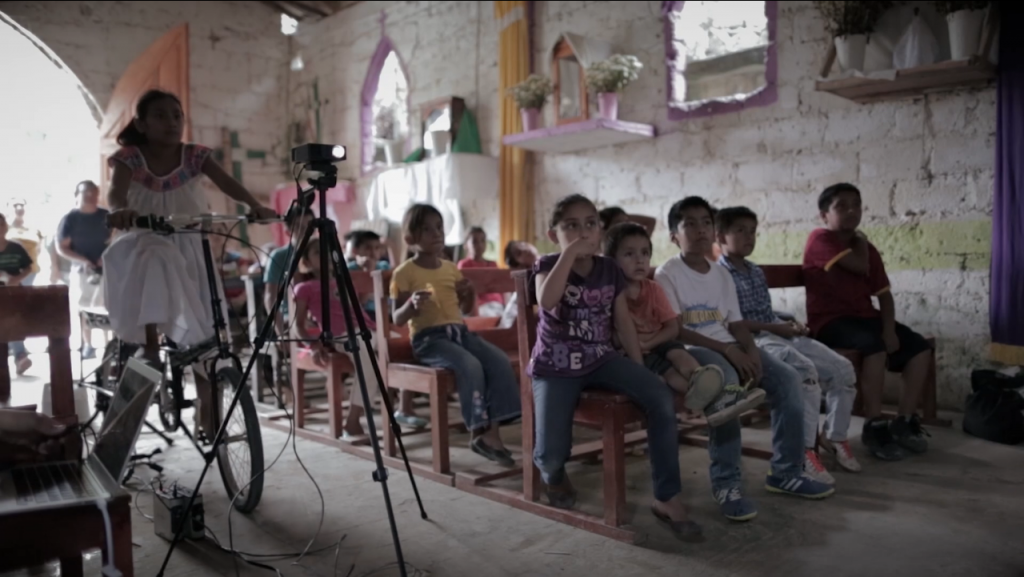 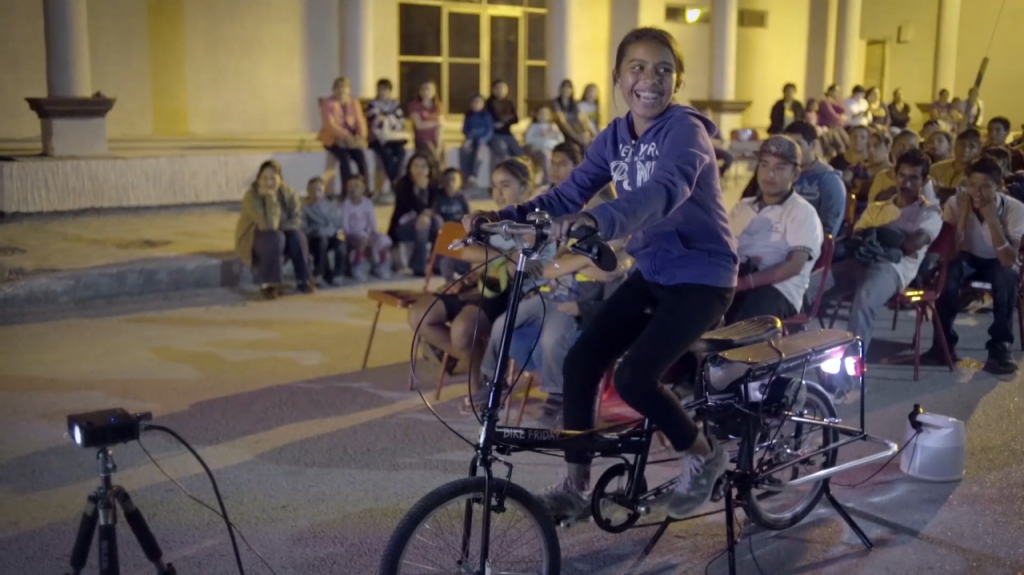 The Cine Bajo El Cielo team has traveled 7000 miles to bring pedal-powered movies to over 50 communities in Mexico. After hundreds of screenings with thousands of participants, one experience in Chiapas really stands out for Claudia: “We were screening short films in a public square and there were some street vendors around, one of them Diego, 5 years old, took his small box of candies and sat on the floor watching attentively the short film called Grasshopper Grandma. (Grasshopper Grandma, is a metaphor based on the true story of how Bolivians fought to defend water against big corporations). I sat next to him when suddenly I recognized a few tears running down his cheeks. I asked him if he was ok, and he answered me, “it is very sad what they are doing to Grandma.” I told him, “but it is just a movie” and he said “No, they also do that with us.”
.

With the convergence of education, community engagement, filmmaking, and environmentalism, the Ciclocinema project is, in a word, magic. Take for instance the film made with the children of Guelaguichi- the kids wanted to tell the true story of how their village saved a whale that washed up on the beach. After meticulously crafting all of the props and characters out of reused materials, the children patiently moved each piece through hundreds of frames to bring the story to life. With the help of volunteers, the 20 children also recorded all of the narration for the short film. And at the end of the week long workshop the community was invited to screen the film while the kids pedaled to power the projector. The joy of the children in sharing their accomplishment brought Claudia and her team to tears:

“All the Cine Bajo el Cielo Team cried at some point of the night, it was so emotional to watch the children dressed stylishly arriving with all the family with a big smile on their little faces. They exuded a contagious emotion of being the creators of their own film. They were very proud of themselves. It was very satisfying to see the happiness of the children when they realized that they have a place in the community.“ 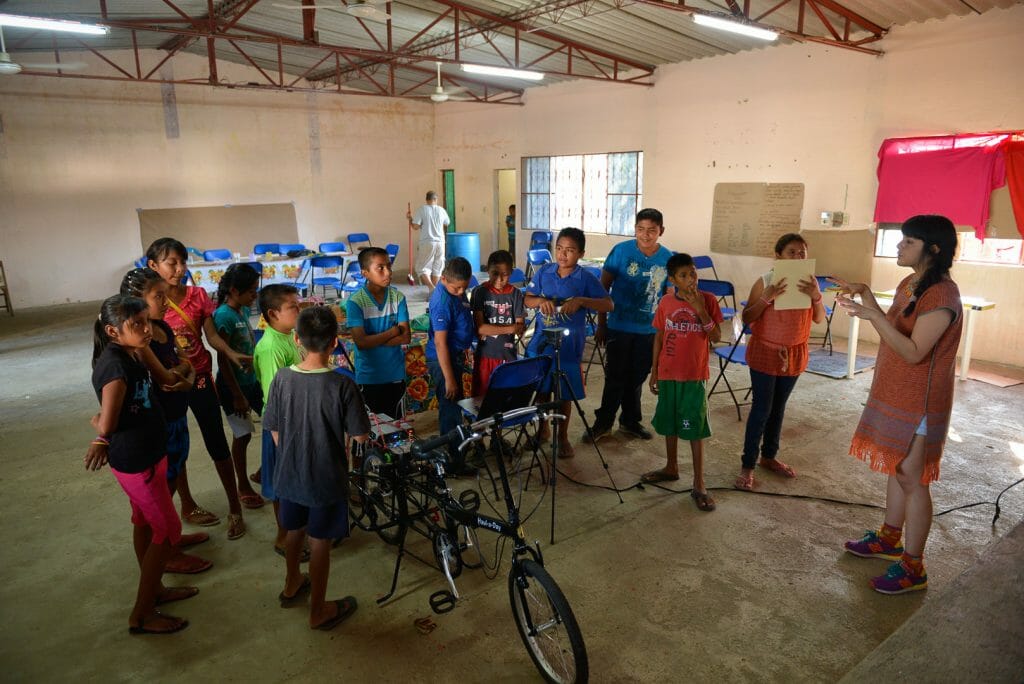 The children of Guelaguichi brainstorming their animation 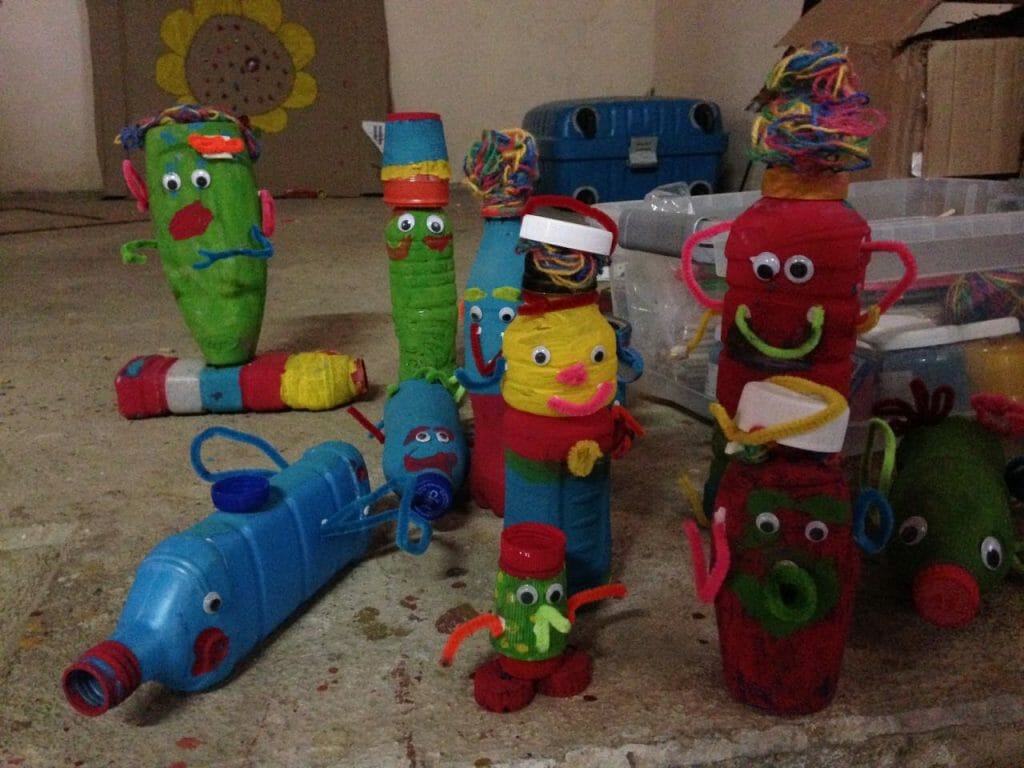 Some really great creatures made from old bottles and pipe cleaners 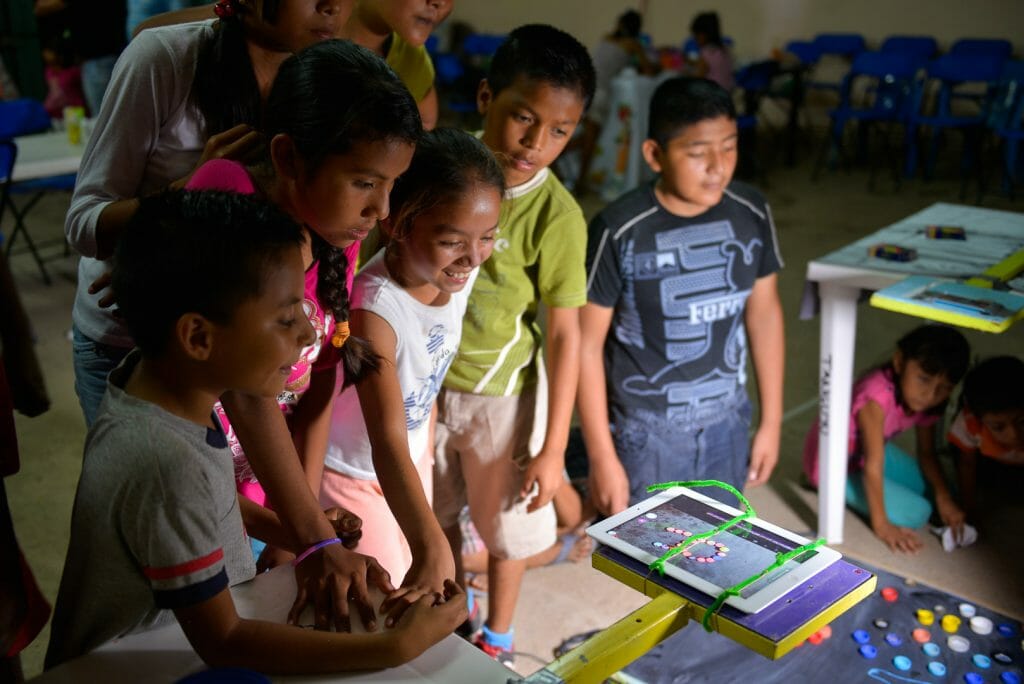 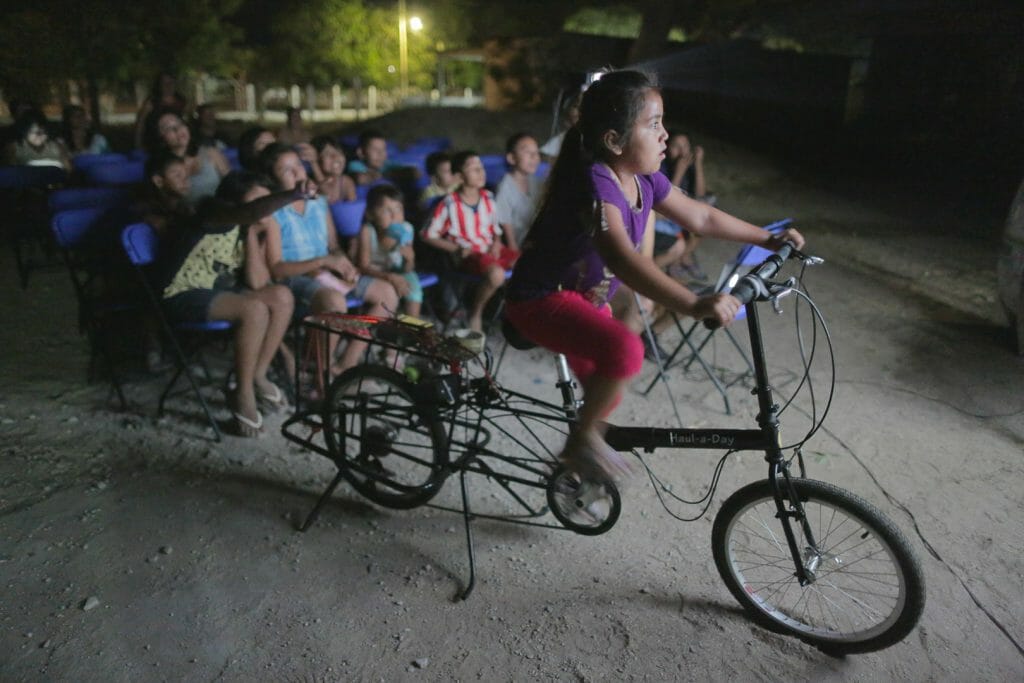 Pedaling to generate electricity for the screening 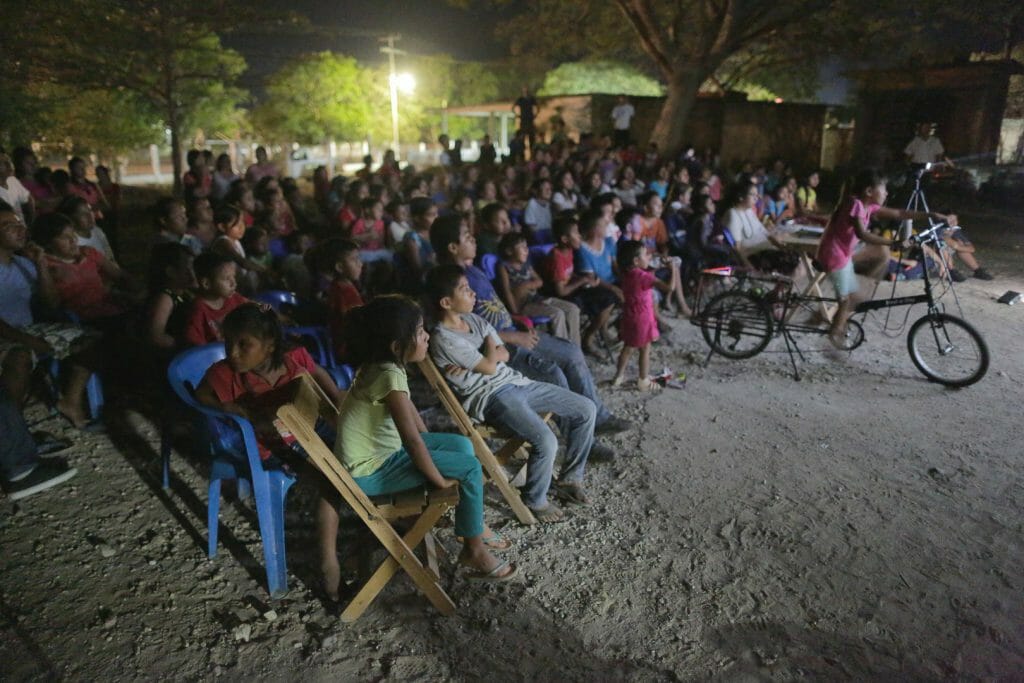 Opening night! Everyone’s families and friends pour out to watch the short film

You can see some of the films on their website here:

So far the Ciclocinema project has worked with 2 groups of children to produce animations, they will be visiting 8 more communities to make a total of 10 animated shorts. At the end of the project Claudia and her team will release all 10 shorts together as a film. Cine Bajo El Cielo’s passionate work is funded through a mix of government grants and private donations. The Ciclocinema project is currently looking for additional funding to be able to leave the iPads and other movie making equipment with the communities they visit. You can help empower impoverished children in Oaxaca by making a donation of any size to the Ciclocinema Project via PayPal: clacovash@gmail.com

The Ciclocinema team is Carolina Gomez, Vladimir C Roshdestvensky, David Lavin, Carolina Flor, Juan Camilo Escobar, Irene Heras, Laura Suarez, Diego Suarez and Claudia G. Covarrubias. To learn more about the team and their project visit their Facebook page, be sure to give them a thumbs up while you’re there! To learn more about the Haul-a-Day, the bike powering this great project, visit the Haul-a-Day page. Also, if you’re interested in building a pedal powered generator for your bike check out this tutorial.