Photos from the road …

Phil Liggett (left) and Paul Sherwen pose with the Carbon Drive tikit at the 2011 Tour of California.

You see photographs like this and just wonder.Â  How does one get the likes of the hallow voices of cycling, Phil Liggett and Paul Sherwen, to pose with your bike?

Oh, we suppose the short answer would be that Liggett has been a long-time Bike Friday owner.

Special Projects Manager John Rezell, aka, Raz, reports that in his stint covering cycling, it was difficult to go to any race that Liggett attended without hearing about his Bike Friday. 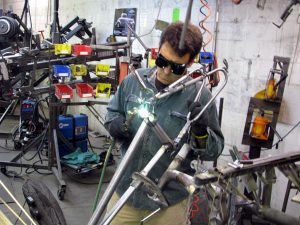 But there’s more to this story. There always is.

The Carbon Drive tikit showed up at the Tour of California courtesy of Jeff Linder, one of our Angel investors who has helped make Bike Friday what it is today.

Jeff is more than just Bike Friday owner and investor. Co-Founder Alan Scholz likes to call him our Factory Pro.

No, lest you think the life of a Factory Pro is all fun and games, well, take a gander of how Jeff spent his spring.

In Belgium. Racing on cobblestones. On a Bike Friday.

We could call it a wrap right there. But again, we say, there is more to the story. We’ll let Jeff fill you in on his fun last week at the Tour of California: 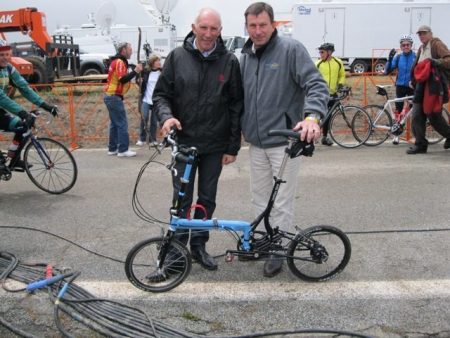 Wow, what a party!
Hundreds and hundreds of excited cyclists lining the roadway up the fabled Sierra Road climb as Chris Horner moves into the lead of the Tour of California ahead of the perennial winner, Levi Leipheimer.
But several hours before all of this roadside madness, there was a lone cyclist spinning his way up the 15-percent grades of Sierra Road, on a strange-looking 16-inch wheel bicycle that he will fold up and gain entree to the “No bikes allowed” VIP section with his svelte little package that will look as innocuous as a folded wheelchair.
Now, remember this little package allowed our fearless traveler access where motorized vehicles have been cordoned off and the terrain was challenging enough to create a television-worthy mountaintop finish.
Wait, wait wait! I’m not done yet.
Maybe one of the coolest things that happened because I was on my little tikit was that I caught the eye of the “Voice of Cycling”, Phil Liggett.
This really isn’t much of a surprise though because Phil (yes he has his MBE) has been a long term aficionado of Bike Friday as he’s been riding his sweet Campy equipped PRP since 2000.   Phil and Paul Sherwen had a chance to spin the wheels for a few moments between sound bites as the galloping peloton proceeded onward.
Ah, another day in the life of a Bike Friday boulevardier.
EDITOR’S NOTE: Boulevardier?! Yeah, that sounds better than Factory Pro.

One thought on “Photos from the road …”