Muang Nan-Xayabouri: Short ride but still going up and down 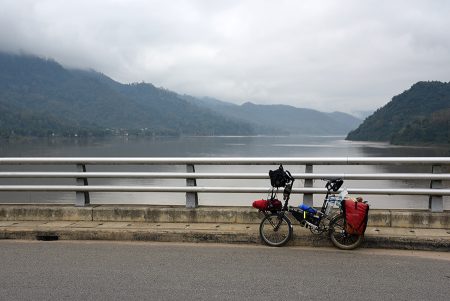 Today we woke up late at about 7:30 am. We were lucky the guesthouse gave us a hose and we started to clean our bikes then. They were so dirty and the dry mud was already hard like stone. Hard work! 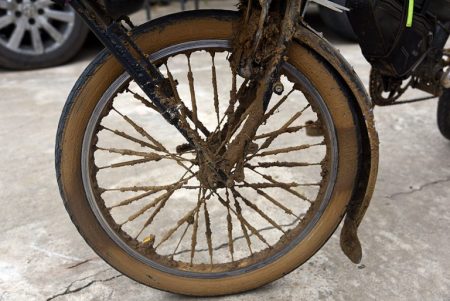 After I helped Hernan to adjust his gears. He found they were not working properly because he couldn’t change the small plate in front. It took us a while until he discovered the reason for the problem. Some dirt was blocking the shifter…..

We checked all the screws, put some oil and were ready to go.
At 10:30 we had to say good-bye to each other. Everyone cycled in his own way and we left in different directions. Hernan, my friend, take care, have a safe ride and may all your dreams come true. 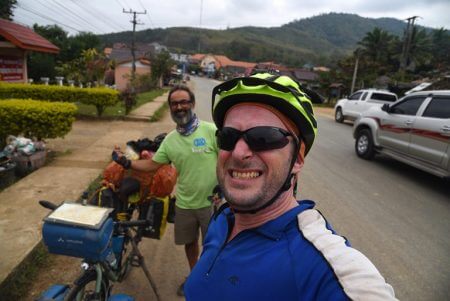 I cycled on and the road was busy with some Chinese trucks. I’m already used that the road is going up and down. In this part of Laos, I never had a route that was flat. I took it easy and I was enjoying the ride as I knew it would be a short one. I crossed the newly built bridge over the Mekong that it is not even shown in Google map, yet.

I stopped for a drink at a small shop. There was a little girl inside and in the beginning, she was shy. After she began to talk some words in English and then even brought me her school book. I was an English teacher for 15min, haha can you imagine!?
I reached my destination early and I checked in in a guesthouse called Bounvong Guesthouse. I went to have some lunch and on my way back I strolled through the market. I bought one of these cheap Chinese head torches everybody uses here, even on motorcycles.

Thanks for sharing your journeys with us