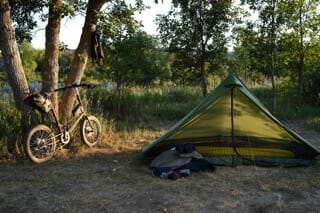 With summer ending I was craving a last meditation: I’d been to 49 U.S. states, and North Dakota was the only one missing. It wasn’t intentional avoidance, just circumstance and vectors of life. I was glad for the remaining promise of buttes and grasslands and bison and an impossible sky.

Using digital and paper maps I traced a loop with substantial gravel roads, spans of asphalt, and, joyously, the famous Maah Daah Hey trail. The MDH dates back to before social media bragging of multi-day non-motorized adventure rides, before the word “bikepacking” was on the tip of everyone’s ambition. The original 96 miles were completed in 1999 and designated a national recreation trail in 2002. Its dirt ribbon nowadays runs 144 miles, all except the national park sections open to bicycles. “Maah Daah Hey” means something like “long lasting” in the Mandan language. I remember hearing of the MDH those decades ago and resolving someday to ride it. Incorporating it into this trip was obvious. 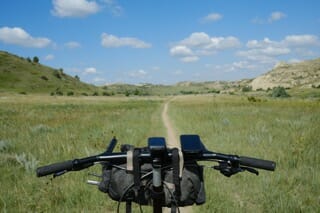 A folded bike in a suitcase, travel to the airport on two trains, bag checked and onward to Denver. Then the hop to Williston, ND, bumps and clouds turning to wrinkles of land neither of the Rockies nor of the plains. Something intermediate, not in the sense of becoming one or the other, but a fusion of textures altogether gloriously itself. 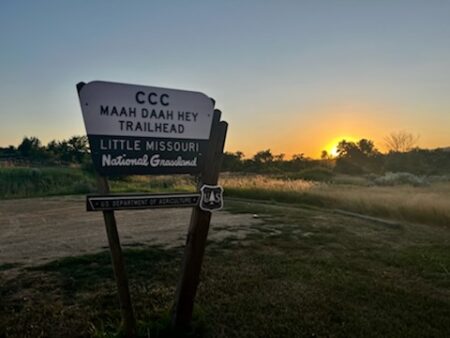 On arrival I spent the evening with a beer and a sunset walk to marvel at clouds stacked to the top of the horizon in orange and purple strata, plus a stop at a grocery store for supplies that would see me to Medora. I’m never not pleasantly surprised by how easy it is to unfold Fridays in a few minutes. I load all my gear just so in the soft, rackless bags that I brought.

That first day, eighty giddy miles over a mixture of gravel roads and tarmac to camp the first night just outside of the north unit of Theodore Roosevelt National Park. The next day I would out-and-back the scenic park access before getting on the trail proper. Not a meter of shade, so the hours were ubiquitous sunbeams refracted through dust and the sound of my breathing on the short sharp climbs. I was seeking and found a warmth intense enough to boom silence, the rearrangement of sand under knobby tires was more like an equation for time passage than sensation. Sometimes I was thinking about geomorphology, sometimes extraction economies, sometimes western mythology. The best times I was thinking of nothing at all, letting my consciousness smear into layers of sediment and the shimmering green. Waves of crickets would rise from the track just ahead of my tread, their chittering flight and arcs engraving small pleasant marks in the serenity. These are steady landscapes that bend imagination and, in me at least, are a path to quietude. 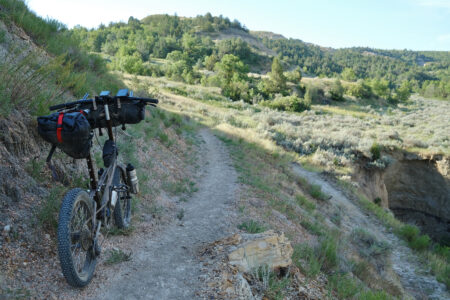 Roosevelt came to this part of the American West as a young man to ranch and hunt. It’s not a stretch to speculate that his veneration for these open panoramas is what led much later to his use of executive power to expand the national park system. Surely his legacy reads as more complicated now, but at the level of reverence, resonance, solace, we can feel in these canyons as he did.

I reckon most people would set out on this ride on a rugged sturdy bike with capable knobby  tires. And so did I: I rode Bike Friday’s brand new model for adventure riding, the All-Packa. I was excited to take it on an ambitious off-road trip. Of course I’ve ridden my NWT and even my PRP on dirt and gravel roads, but the All-Packa opens up terrain and possibilities like no other. The All-Packa is dauntless confidence.

Three days on the single track trail, scarcely seeing a half dozen people. Campsites are about 20 miles apart, so I could set out in the morning and ride with no urgency to lunch at a camp with its well pump and then stop for the day at the next one. Hiding from the afternoon in my tent, listening to the soft intimations of wide scenery. The high plateaus of land here were formed not by rising but by remaining after everything else was eroded by water. I like that as a metaphor, places that exist from persistence rather than assertion. Pedaling along the buttes, sweat and wonder. Hills unfurled under wheels, and the bike felt like any other gravel bike on the orange pebbly dirt. 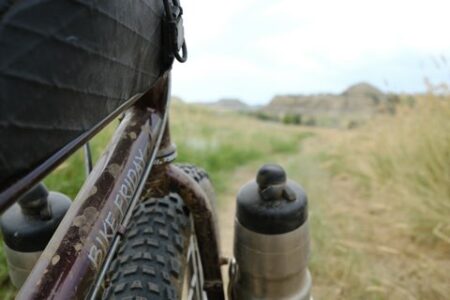 I waded the Little Missouri, slow chocolatey water up to my hips. With most of the other creeks through here reduced to hints and promissory notes, this wide river seems an introverted guest or maybe a surprising chance meeting. I took off my socks for the crossing, my shoes and shorts will be dry in twenty minutes. And the riparian zone trees are an anomaly, too. I’ll ascend above them shortly and when they’re out of view from atop the plateau I’ll wonder if I hallucinated them.

Medora was a happy reentry into ice cream shops and friendly tourists hellos. Staying there for a day gave me a chance to visit the more popular south unit of the national park. One moment just me with a rattler crossing the road, another watching prairie dogs watch me and call out in their sundry signals, another with bison grunting their gravitas and maybe wondering at the figure on bicycle.

I’d budgeted fewer days for getting back to Williston. Those were dirt road and highway effortful hours, expressions of the love of pedaling and being carried by the cyclical motion, the human pace but still committed to distance. An invention that is somehow terrestrially practical and also astral. My head down into the ride, stopping for convenience store snacks and spells under awnings. 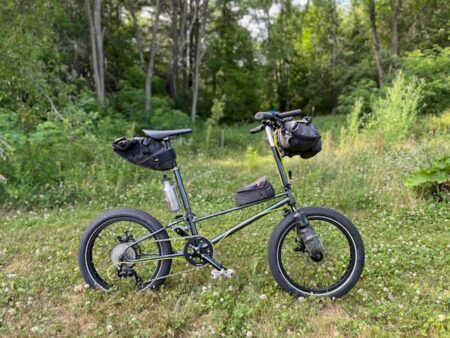 I can’t think of a limit for this bicycle on this trip or on so many that I can envision. It’s not for technical, staircase-rocks sorts of trails, of course. Those are suspension and big wheel, angle of attack days. The All-Packa, though, shrugs off rutted, broken tracks. It’s balanced, controlled, unflappable. It climbs and descends off-road with an attitude of yes-it-can, it’s a bicycle to take anywhere and then pedal just about anything.

Back at the Williston motel that I stayed in the first night, I brushed off what dirt I could and folded the bike away. A tool for seeing and being, and then it could disappear, too, into the chance simply to revel in the way a place can heat into a heart. 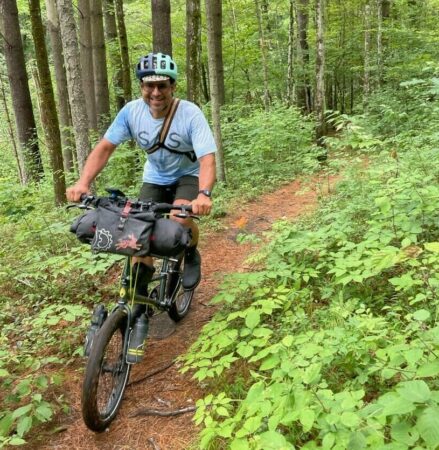 Joe Cruz has traveled the globe adventure cycling for over thirty years and for much of that time has also been a Bike Friday owner. He lives in southern Vermont and in his native New York City, and is chair of the philosophy department at Williams College. Joe’s blog is joecruz.wordpress.com and you can find him on instagram @joecruzpedaling and on Strava and RideWithGPS.

Also check out Joe’s Interview with Bike Friday All-Packa designer Willie Hatfield on how the All-Packa was designed printed on Bikepacking.com.

“Behind the scenes with Willie Hatfield” 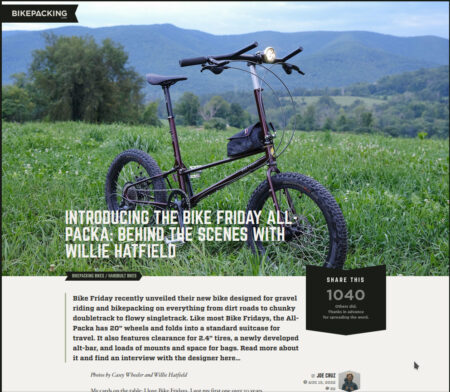 One thought on “All-Packa Adventure Across North Dakota”