What does a bicycle call its dad? A: Pop-cycle

Family adventure abounds in this on-going story which will soon(we hope) be turned into a book.  Enjoy this amazing families story done on two Bike Friday Tandem Bikes…the adventure of a lifetime for these two kids, who, have seen more adventure in their short years than many have seen in their whole life.

Sometimes parenting is like a hyperactive game of Trivial Pursuit.

“Where does water come from?” “What’s my blood for?” “When did the first human happen?” “How are glaciers formed?” 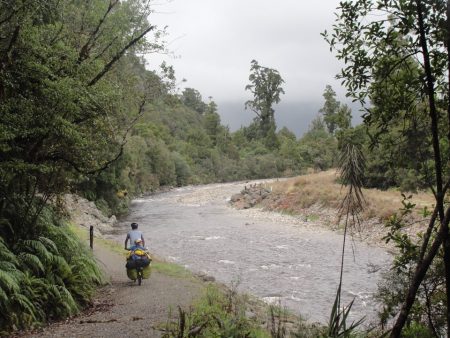 At home, there’s Wikipedia. On a cycle tour along the ruggedly gorgeous west coast of New Zealand, you cobble together the faded remnants from depressingly distant high school and university classes – and then your bike by an actual glacier and discover the answers firsthand.

We encounter a lot of curiosity (slash concern) on our rest stops about what we’re doing for the boys’ schooling. At their ages they should be in a classroom six hours a day – and they are, only theirs has no walls (literal or figurative) and great exercise because every day is a field trip. 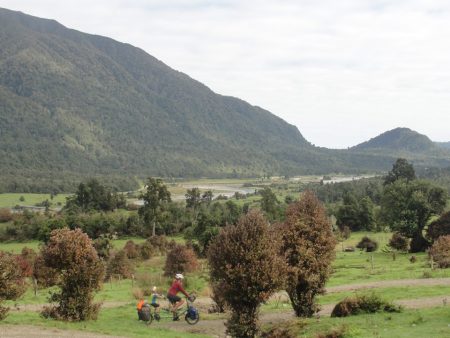 This week in our world-schooling adventure began on the West Coast Wilderness Trail, a three-day inland jaunt through a fern-filled native forest and along mighty mountain rivers. The cycling was exhilarating as we slalomed along the smooth off-road paths with loads of twists and bends like a day-long dirt bike ride. While we whisked along, Heron learned several new French verbs with Ed, while Sitka resumed his line of questioning for Joyce about human anatomy and bodily systems – kind of a pre-pre-med program for an inquisitive kindergartener.

The bulk of our cycling days are filled with Q&A on whatever whim of a topic piques the boys’ intrigue – often it’s math or spelling games (we finally stumped them with chlorophyll and photosynthesis), or meteorology, as we experience weather firsthand and endlessly try to predict what the clouds will bring next. One afternoon, we passed a series of reservoir lakes and talked about where drinking water comes from. And when signs warned of old gold mining shafts, we switched on to minerals and geology. For the next week, the boys constructed mining towns at every beach and rest stop, as they often do, recreating what they’ve seen during the day in their extraordinary imaginations. 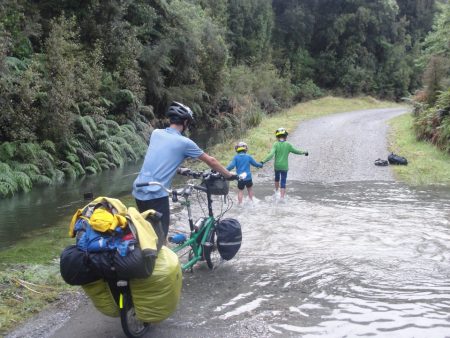 Then, in the evening between our incredible visits to the Franz Josef and Fox glaciers, we stayed with two recent geology grads, Jules and Mark, who have passed the last few months as glacier guides taking tourists up to the summits in helicopters. The boys’ every question was answered about the rocks we found (some compressed from sand over 125 million years ago) and how the Southern Alps range is still rising from the rubbing tectonic plates deep below.

We all learn quite a bit on our own, too. Both Heron and Sitka read every info sign they see in its entirety, recounting for hours every detail about the tree or creature in question. Did you know New Zealand’s freshwater eel grows to two metres over almost 100 years of life, and at the end migrates far into the South Pacific to an island where they spawn a new generation, that then floats back on ocean currents to the same lake their parents lived in? Well, now you do.

Read the rest of the story and follow their adventures here: 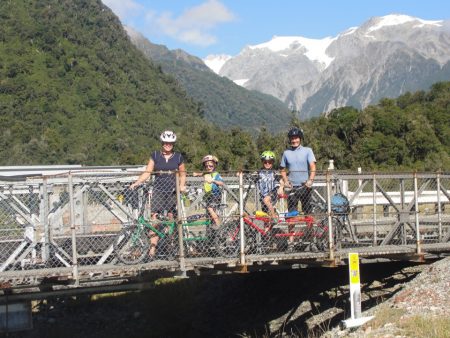