Three sixty-something guys went cycling for eight days through Italy, more or less Florence to Rome. The trip turned out to be much more of an athletic event than expected, with some of the steepest hills I have ever cycled. Also, I had heard that Tuscany was over-touristed.  Could we, on bicycles, discover the real Tuscany?

This trip began as a vague idea. Lyman and I had been searching for the next big bike ride in Europe, preferably Italy, Spain, or southern France. Lyman’s friend (now also my friend) Randy Greenberg, a computer professional, taught Lyman some tricks when searching online for airfares. We needed a low price to anywhere. 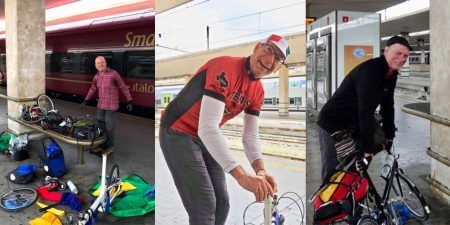 I live in Chapel Hill NC. The closest airport is Raleigh/Durham. Lyman and Randy live in Austin TX. Using Randy’s suggested apps we found roundtrip on American Airlines RDU airport to Rome airport in early April for only $ 533.00!! A short flight to Charlotte NC, then nonstop to Rome!! Only $633.00 round trip Austin TX to Charlotte to Rome!!   Lyman and I could go most of the way on the same airplane!!

These deals were too good to pass up.  As it turned out, these prices were only available for a few days. Lyman and I agreed to fly to Rome in early April. A few days later Randy agreed to join us. We hurriedly bought the tickets while the price was still low. We could work later on the details.

The flights going over had issues. There were thunderstorms in Charlotte that delayed me twenty-four hours. Due to that same weather, Lyman and Randy were transferred by American Airlines to British Airways who subsequently lost Lyman’s luggage (i.e. bicycle) for an even longer amount of time. We were two days behind schedule when at 12:45 PM on a Thursday we stepped off the high-speed rail line at Santa Maria Novella station in central Firenze (Florence). It had taken us from central Rome to Florence in under two hours.

In the Florence train station, we put together our folding bicycles, all Bike Friday brand.  We would make a good commercial for them. 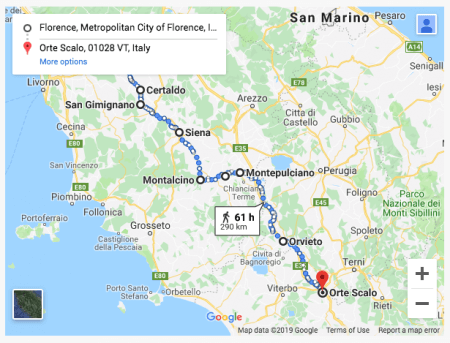 Read more of their great adventure here(trust me you want to read this): –} Click Here {–