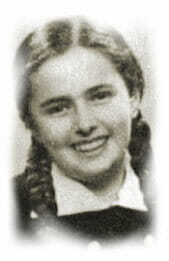 Eva Heyman was a Hungarian Jew during World War II. She was deported to Auschwitz and gassed there when she was only 13 years old.

Shortly after the Nazi’s invaded Hungary, she wrote in her diary:

Today they came for my bicycle. I almost caused a big drama. You know, dear diary, I was awfully afraid just by the fact that the policemen came into the house. I know that policemen bring only trouble with them, wherever they go. My bicycle had a proper license plate, and Grandpa had paid the tax for it. That’s how the policemen found it because it was registered at City Hall that I have a bicycle.

Now that it’s all over, I’m so ashamed about how I behaved in front of the policemen. So, dear diary, I threw myself on the ground, held on to the back wheel of my bicycle, and shouted all sorts of things at the policemen: “Shame on you for taking away a bicycle from a girl! That’s robbery!”

We had sold my old bicycle, my layette and Grandpa’s old winter coat and added the money we had saved. My grandparents, Juszti, the Ágis, Grandma Lujza and Papa all had chipped in to buy my bicycle. We still didn’t have the whole sum, but Hoffmann didn’t sell the bicycle to anyone else, and he even said that I could take the bicycle home. My father would pay, or Grandpa. But I didn’t want to take the bicycle home until we had all the money. But in the meantime, I hurried over to the store whenever I could and looked to see if that red bicycle was still there. How Ági laughed when I told her that when the whole sum was finally there. I went to the store and took the bicycle home, only I didn’t ride it but led it along with my hands, the way you handle a big, beautiful dog.

From the outside, I admired the bicycle, and even gave it a name: Friday. I took the name from Robinson Crusoe, but it suits the bicycle. First of all, because I brought it home on a Friday, and also because Friday is the symbol of loyalty because he was so loyal to Robinson. The “Bicycle Friday” would be loyal to “Éva Robinson”, and I was right because for three years it never gave me any trouble, that is, it never broke down, and there were no expenses for repair. Marica and Anni also gave their bicycles names. Marica’s was called Horsie, and Anni’s was called Berci just because that’s such a funny name.

One of the policemen was very annoyed and said: All we need is for a Jewgirl to put on such a comedy when her bicycle is being taken away. No Jewkid is entitled to keep a bicycle anymore. The Jews aren’t entitled to bread, either; they shouldn’t guzzle everything, but leave the food for the soldiers. You can imagine, dear diary, how I felt when they were saying this to my face. I had only heard that sort of thing on the radio, or read it in a German newspaper. Still, it’s different when you read something and when it’s thrown into your face. Especially if it’s when they’re taking my bicycle away. Actually, what does that nasty policeman think? That we stole the bicycle? We bought it from Hoffmann for cash, and Grandpa and all the others worked for this money.

But you know, dear diary, I think the other policeman felt sorry for me. You should be ashamed of yourself, colleague, he said, is your heart made of stone? How can you speak that way to such a beautiful girl? Then he stroked my hair and promised to take good care of my bicycle. He gave me a receipt and told me not to cry because when the war was over I would get my bicycle back. At worst it would need some repairs at Hoffmann’s.

Ági said that we had been lucky this time, but that next time we should let them take whatever they wanted. In any case, nothing could be done about it, and we shouldn’t let those stinking scoundrels see how much we suffered. Still, I don’t understand Ági. What do I care whether they know or don’t know that we suffer? It isn’t hard to see that if everything you own is being taken away from you, and soon you won’t even have money to buy food, you suffer. But what does it matter? Ági doesn’t have to hug the bicycle wheel and sob. Anybody looking at her can tell that not only does she suffer, but day and night she trembles over what is in store for Uncle Béla.

Next time you are out on your little red bike, please remember the first bike Friday and Eva. 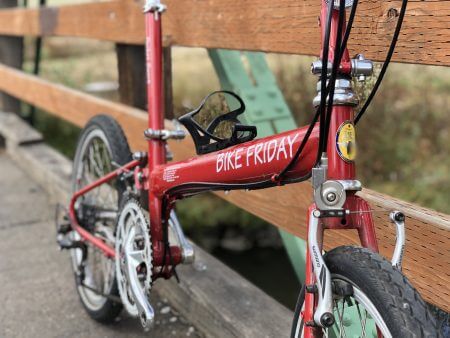 2 thoughts on “The first Bike Friday –”