The best way to stay young? Become a triathlete. 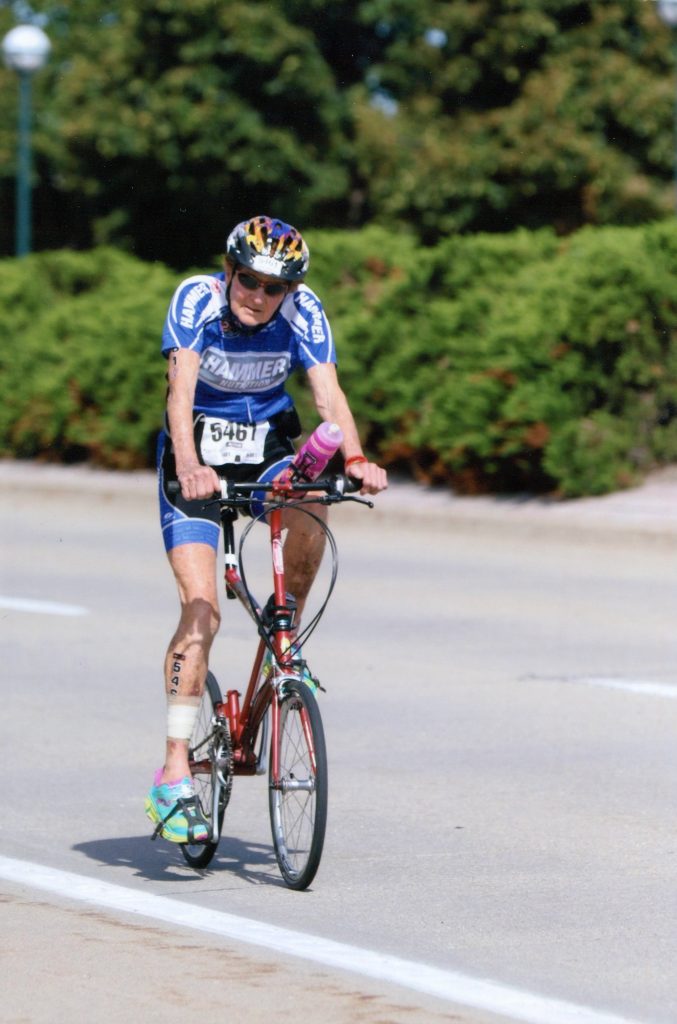 Become a triathlete. And learn email.

At least that’s what Susan B. Cox, the first woman inducted into the Triathlon Hall of Fame, advised her friend, and fellow athlete, Molly Hayes.

At 83 years of age, with over 325 triathlons under her belt, Bike Friday owner Molly Hayes is a veritable tour de force on the triathlon circuit. Since 1986, Molly has competed and placed all over the world: Mexico, Turkey, Saudi Arabia, and Australia. She won the gold for her age bracket this year at the USA Triathlon, and is virtually unbeatable in her home state of Montana. Why does she do it? To stay healthy, be outdoors, and to win: “I enjoy seeing how many other gray-haired old ladies I can beat.” And even when she loses —which is rare— she says it’s “inspiration to train even harder.”

Molly has been running ever since childhood, she fondly remembers leaping from one log to the next during the low tide at the beach. Years later, as a registered nurse she traveled abroad and had a lot of fun competing with the locals and the other nurses. While overseas, she got serious about cycling, born out of a concern for the long-term impacts of running. Though doing anything outside of the compounds was risky, especially in some of the more strict Muslim nations:

“I was made an example of many times… I borrowed a mechanics bike and rode to the souk, we were supposed to take company buses. I was properly long clothed but my red hair escaped, and I got spotted by a funeral group. It was only a 7 mile ride on 2 speed bike, but when I came back to the gate of compound, OMG, the royal Somali guards almost tied me up. I was held 3 hours at the guard house and finally the American administrator of the hospital, a red headed guy from Boise, Dr. Pepper, he came to bail me out. I was fined $300 and the Somalis took my pitiful lil’ shopping items from the souk, a frozen chicken, beets and embroidery thread and threw it outside the gate.” 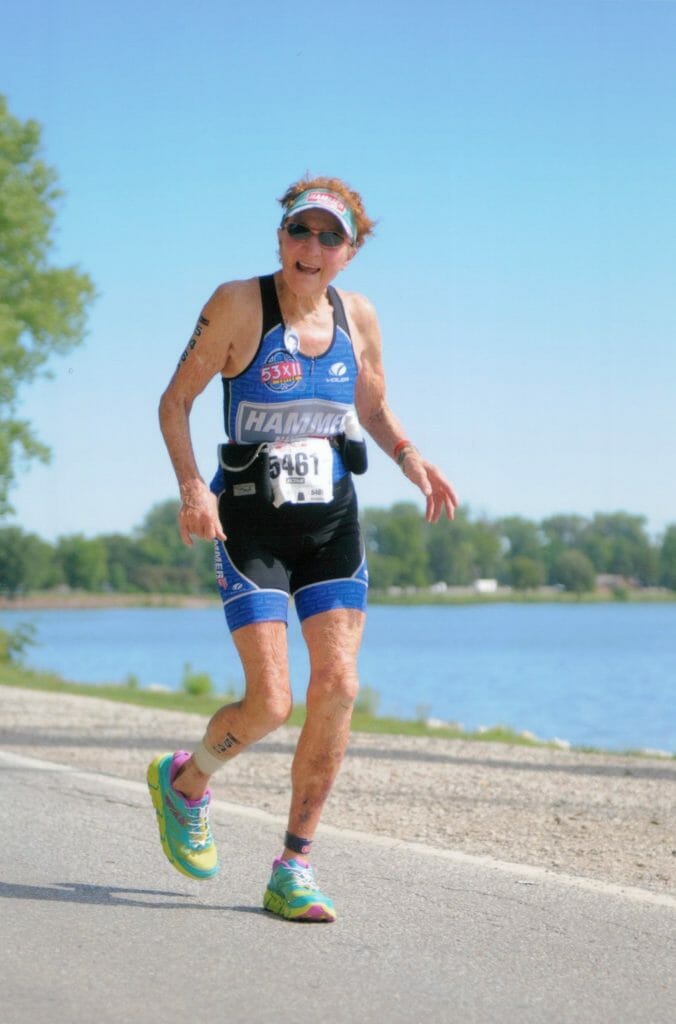 In Molly’s first triathlon, the Whiskey Dick in Washington state, she got to meet and race alongside the Sister Madonna Buder. Though she didn’t compete directly with the Iron Nun, a nickname for being the oldest woman to complete an Ironman, because “we weren’t in the same age group.” A fact that, by ’09, had changed when the two got to compete directly at the Gold Coast Triathlon in Australia. “I went on to Team USA  in the Gold Coast with my lil’ Bike Friday and got 2nd in Olympic… Sister was going to do the sprint next day, she came to transition and said prayers for all the oldie girls, then wished me luck and walked away. She let me get the gold in sprint, what a neat lady.”

But Molly hadn’t always had the Bike Friday she used to secure the gold that year. Her story is pretty telling of the experiences that many triathletes —or anyone really— can have when traveling with their bikes:

“I had my Felt bike in a big hard-sided case, $235 to get it there and back. I had the return receipt all in order, even so, it was kept in customs for 5 weeks and they wanted duty to let it be shipped back to Montana from Hamburg Germany. That did it. We had seen three Bike Fridays at Team USA that year, and Tom [Molly’s husband] had watched how they went together –and the guys were serious triathletes, they had clip-in and aero bars– and that all convinced both of us to go with the ease of Bike Friday. I have been thrilled with my Air Friday ever since.”

When I asked Molly what other traits she loved about her Bike Friday she was quick to mention that “it is so much safer being lower to the ground for me as I have aged, I got rid of my other two bikes and use the Bike Friday for all my biking.” 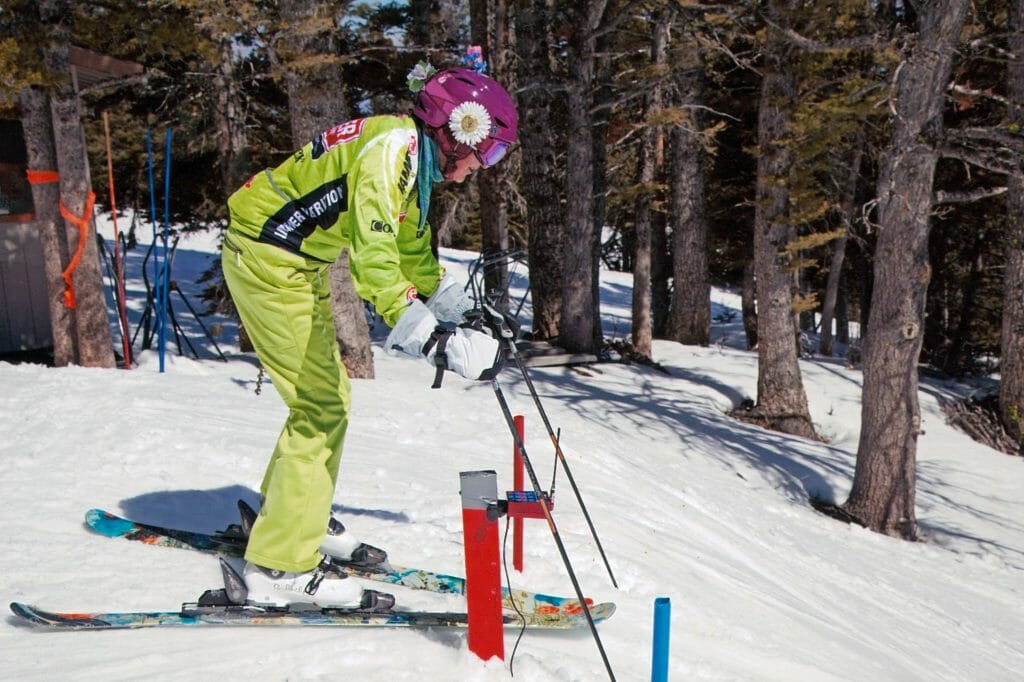 I know what you’re probably thinking- I could never do what she does at her age, but Molly doesn’t seem to show any sign of slowing down, and she doesn’t think that you should either. When asked by Endurance News what her secret was she said “I challenge myself to face whatever the day brings, and I make sure to do some form of training every day, typically running, once in the morning and later again in the evening. Consistent activity and the right nutrition enables me to keep doing everything I want to do: running, swimming, cycling, hiking, downhill skiing, and Nordic skiing.”

We asked Molly to go into detail about her exercise and diet regimen:

“I run all year outdoors, I gotta be outside, thats always just part of the challenge: 2.8 miles in morning and the evening. All the months that the roads are good, I ride 10-15 miles per day, sometimes 20. I swim 3 miles a week in our wonderful 50 meter pool in Bozeman. I’ve used protein powder for about 10 years which I mix with milk. I still eat 3 regular meals a day, I always have salad and vegetables and some protein at dinner. I get probably 40-50 grams of protein a day. I would eat fish 7 days week but I vary it for my husband.  My calcium, for strong bones, comes from dairy products: low fat yogurts and cottage cheeses.”

And Molly, who is sponsored by Hammer Nutrition, swears by their products saying “I bet more lives have been helped with the Hammer products than any other way; Hammer is my glue.”

There you have it:

If you want to learn more about our performance folding bikes be sure to visit our Road & Sport page. Unfortunately, we no longer offer the Air Friday model that Molly rides, the closest thing to it is the our ultra-light folder the Super Pro.

4 thoughts on “The best way to stay young? Become a triathlete.”