The Joy of Riding on Sunshine 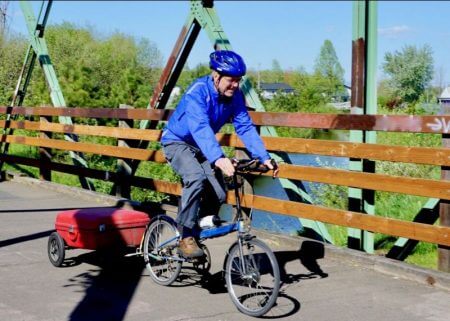 In the first article I wrote of the confusion about electric bikes, how I felt we had been right – but very wrong, about cycling’s ‘sweet spot’, & Joy.  Here I continue my sense of epiphany. / Alan The ‘Designing in 12 Dimensions’ bike designer.

1964 in retrospect was a big year for me developmental wise. My first year in junior high in Fargo North Dakota.  About as far away from what was happening in the US as you could get. A child of the 60s but not one of those change makers. Just a child. Just the fall before a very popular president had been assassinated. In January a Singing Nun from Belgium was #1 on the pop charts with ‘Dominique’. Sung in French no less! And then the Beatles had arrived! I remember the PE class doing our laps outside & nearly all singing (boys) ‘I want to hold your Hand’. Together out loud?! I admit it mystified me. Took me years to get it. Far away from 13-year-olds in North Dakota, the Equal Rights act was signed in July by the 3rd president I remembered. Ike, John, Lyndon B.  40 years before I read his autobiography & understand what a hero to us all Dr. King was.

That same summer my best friend & I, Eric, began, in retrospect with very short independent bike trips, our deep dive into cycling. In July the Equal Rights Act was enacted. In September the US began bombing Viet Nam (to have a huge influence on boys my age in the late 60s as they were shipped off to a war we did not understand.) Between those was an event in August that did get my attention. The first Nimbus research satellite was launched and it ran fully on Solar Power!! Buckminster Fuller was 69, (‘Operations Manual for Space Ship Earth”) just at the beginning really of his storied career that fired up people like me. My big memory of 1964 is an important epiphany that the sun could power us! A dream was born. Human Scale, a world that everyone could take part in & have enough. An energy resources egalitarian dream of a 13-year-old sparked by solar panels on a space ship.

We dreamed of what the world would look like in 20 years! In my mind, a bicycle shaped the world. The bicycle has been the muse of my life.

I know I was just one of many of my generations with a dream, but 50 years is a long time to wait. I still did not have or was able to afford a solar-powered house. Lots of us gave up years ago. The gap between the Haves & the Have Nots grew.  What do we have to show? A lot of young people are frightened, discouraged, & have it looks like given up on big dreams that include us all. After 1964 I went nearly another 20 years without owning a car & only got one because of the second joyous child was a bit too much to handle in our (the original home built Burly for Hanna) bike trailer living 10 miles from town. I could have & would have continued if we had anything near the solar electric assist that is now a reality. And a modern Cargo Bike to go along with the trailer! I almost missed it!

I was really into the concept of Hybrid assist cars in the mid-70s when a number of people built their own. I collected parts for years to do so. It was 30 years later that they were proven to the public by the Japanese with the Prius. With my Engineering training, I knew the 70s Hybrids were a great idea, functionally superior & simpler than IC cars. I was disappointed & ashamed that with many concepts developed by Americans going all the way back to Edison our American designers & companies seemed to have continually missed the boat holding back the whole world for oil &  environmental degradation. All well before knowledge of the Climate Change Crisis.  Something has changed for the better! Thank you, Amory, & the Rocky Mountain Institute & others for keeping the dream alive & helping move it forward. Last August, 54 years later I began it hum when I rode. I still rode even though lower back deterioration & sciatica weakens my left leg. I was less than cycling capable. Was it the electric assist​?

That’s why I could still ride but not why I felt like singing. Last August I put a small cheap solar panel on the roof, plugged it into a cheap readily available charge controller & a common deep cycle battery. From this, I charged my assist battery & have not looked back.  Riding along a few days later a popular song from the 80s started to go through my head  & my dream was reborn. A Popular song in the early 80s was ‘Walking on Sunshine”. A rare happy joyous song. Kind of like “Dominique”. It goes ‘Walking on Sunshine  Wow! Don’t it Feel Good’?! 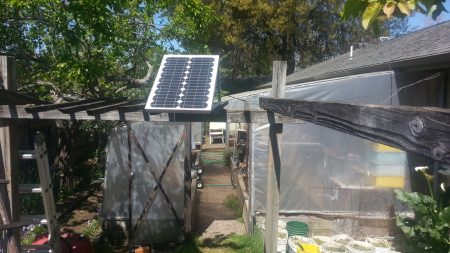 Here is my smallest test solar collector. I mounted it on a trellis over our tomato bed. It is large enough for most of my charging needs for much of the year with some full sun each week. Rated at 25 watts in full direct sun. I need more panel area in the cloudy winter time in Oregon. About double.

However I do not drain my bike battery daily. It takes me 3-4 days of riding at the assist level I use to pull a trailer and ride at a bike-path – reasonable top speed of 15 to 17 mph. I also charge all my power tools I use in my shop and all our cell phones and tablets. I plan to do more in the future as I add to it and gain experience. 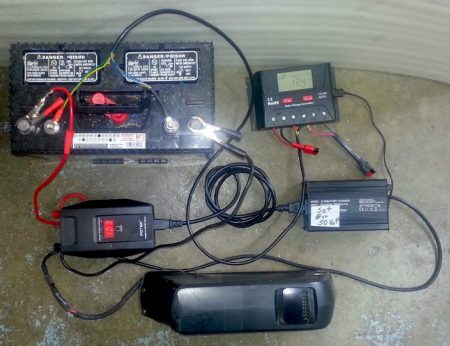 Here is a picture of my charge system components. In addition it needs any 12 volt nominal solar panel.

The full system with minimal solar panel about $150 (not including bike battery and charger). Alan s

You too can reignite the Dream! It is not too late – even at 67!

I think this could be the golden age for the young family with a bit of mentoring. Examples from their elders would be helpful. You can ignite the dream, not of a Tesla in every garage & Solar powering every house, but a dream that all could dream. Even the disadvantaged in Africa. Positive use of the Pareto Principle. Affordable power & transportation kick-start better education, cleaner water, better food & health. Even more empathy from Americans less strapped & more joyful. /Alan

You can read the first part of this series here : https://bikefriday.com/joys-of-ridding-on-sunshine