Ready at a Moment’s Notice

With no glimpse of the sun for more than three days, expectations focused on a possible photo or two of the haze and mist as I rolled out of Mt. Shasta City after a breakfast burrito and latte.

Rounding a corner, the view exploded like a bolt of lightning.

A soft haze blanketed the dark green forest in the foreground, for sure.

But beyond that the sunlight blasted on the stunningly white peaks of Mt. Shasta set against a spotless blue sky.

For many, the true beauty of Bike Friday is that it can be stowed in the back of your SUV beneath a blanket, or the trunk of your car. You can always have your bike with you, without it being obvious to anyone. 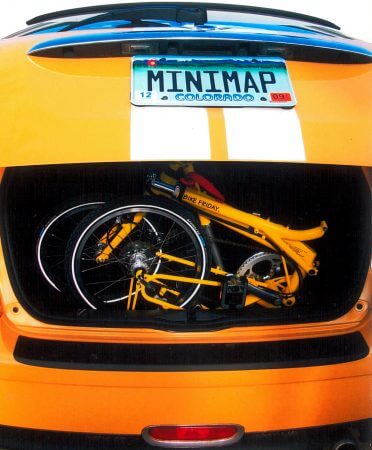 While Bike Friday owners are famous for their epic adventures intricately planned and executed, for some of us, it’s the spur of the moment surprises that rock our world.

Convenience that Bike Friday offers some of us is having your bike with you at all times.

Driving home from a folding bike demonstration at the train station in Sacramento, I spent the night in Mt. Shasta and hoped for some free time to steal away a ride. I typically have my Diamond Llama in the back of my SUV, tucked beneath a blanket, so it’s always there for me.

Having just done a demo for the company, well, I had more than one Bike Friday in the back, but the New World Tourist screamed to be ridden up the Ski Highway. Who am I to say no?

Memo to self: You don’t have to duck or scrunch down to get into the shot taken on the timer if it’s a vertical photo.

There might be no better situation for NuVinci than climbing a big hill. The weight watchers will argue that pulling a 5-pound internal hub up a hill is no picnic. I’ll argue the pros outweigh the cons, pun intended.

Imagine being able to find that perfect cadence for a climb, and being able to maintain it, the entire climb, with just a flick of your wrist. Sweet.

Something about a snow-capped mountain that raises my heart-rate more than a beat or two.

It didn’t take long before some gravel road, then a trail called for exploration. No worries, the bike was up for it.

So I took the first turn possible, pedaled my way to the first trail — which at this point of the year was more like a soft creek bed.

Having some fun on the rollers, and again, using the timer on the camera.

In a blink, I found myself even farther removed from any possible brush with humans. The silence overwhelmed me. The fresh mountain air invigorated me.

Finally, I just pulled over and sat. Soaking in the moment.

I managed to hit Sacramento a few hours early for the demonstration, which allowed me some time to tool around California’s capital city with my camera. As usual, I opt for the NuVinci hub whenever I get the opportunity. This time on the pakiT.

Again, you never know what surprises lurk around the corner.

I found the Sacramento River Promenade and decided to steal away a few minutes riding along the swollen waterway. I couldn’t believe my eyes.

I’m used to getting caught off guard by a great view.

Most, however, pertain to things in this century. Or thereabouts.

I’m not sure what’s more surprising, seeing a ship like this or
realizing how sweet the camera is on my iPhone.

Of course, you can’t ride around Sacramento and not find yourself at the Capitol.

I found myself there as they prepared for the official Christmas tree lighting ceremony. They let me take a few shots before putting up the fences.

Bike Friday lobbies for the fold.

The Carbon Infinity pakiT looks right at home, rubbing elbows with the movers and shakers of the Golden State.

Sacramento is such a wonderful mixture of everything California has to offer, from big cities to palm trees to its Western Frontier heritage.

Then again, you can really appreciate the essence of any place. When you’re traveling by bike.