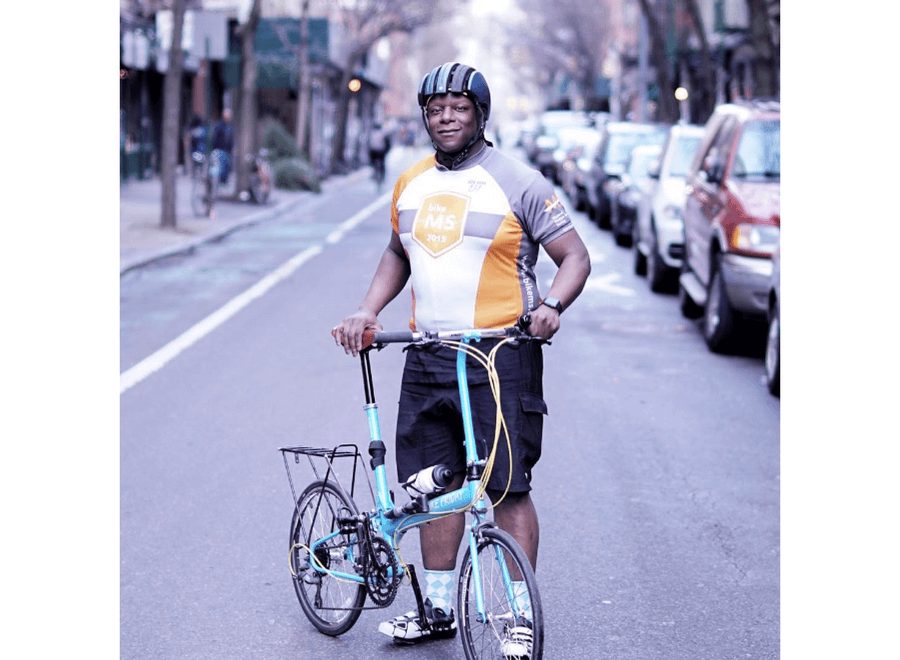 New Yorker and Pocket Rocket owner Newton D. has always loved bicycles, but didn’t buy one for himself until he was an adult. In fact, his very first bicycle was a folding bike:

“It all began with seeing my friends wife zipping around on a Xootr scooter which prompted me to visit NYCEwheels, a bike store specializing in folding bikes, e-bikes, and scooters. The Xootr had a decent amount of speed and I began traveling with it. San Francisco, CA was my favorite city to ride the Xootr until I fell hard on a crooked street. After that trip, I made the immediate decision to go with a folding bike. The move to a folding bike that I could travel with was natural decision.”

Newton’s progression through world of folding bikes is an evolution we’re very familiar with, as we hear it from customers all the time. “My first folding bicycle was a Dahon, I liked it, but it had some mechanical issues so I sold it and bought a Brompton.” Much happier with the Brompton, Newton joined a local NYC Brompton club and started riding regularly with other Brompton owners. 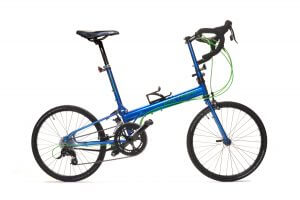 “Some of the other riders in the club also had Bike Fridays and they told me ‘when you’re ready for a more comfortable bike for longer rides, get a Bike Friday.” Newton had never heard of a Bike Friday before, but he jumped on our website and he was hooked.

“I spent a lot of time on the website, reading people’s stories and doing research,” and at first Newton “was determined to purchase the New World Tourist, even though the Pocket Llama was suggested because of my size and posture.” But after several conversations with a Bike Friday Design Expert and a test ride at NYC Bike Friday dealer Bfold Bicycles, Newton started leaning in a different direction. The conversations with one of Bike Friday’s in-house Design Experts were particularly helpful in narrowing in on the perfect bike: “Then after reading through the Bike Friday website many times and speaking with Buck Olen, I was fixated on the Pocket Rocket. Based on my riding style, I wanted to go light and fast and cover long distances.”

Newton could hardly contain his excitement for the Pocket Rocket, he did a lot of research, talked to plenty of local Bike Friday owners and kept coming back to Bike Friday’s website. “At the time that I decided to get the bike, the timing was right. I had to save for a couple of months to make it happen.” As soon as every last penny was accounted for, Newton “got on the website and saw [that our live chat status said] ‘on a bike ride,’ so I’d come back and check again and it was ‘on a bike ride,’ ‘on a bike ride,’ and then ‘how can we help?’ I called up right away, placed my order and I’ve never looked back! Sure enough, friends that I spoke with were correct about the Bike Friday’s performance, and reliability.

With all of the extra power he’s getting out of his bike, Newton is making bold strides towards his personal cycling goals, “My daily routine consists of 20-30 mile average rides before work. On days off, I like to cover the 50-80 mile range.” The longer rides are making a big impact, “I’m losing weight,” says Newton, and after each ride “I come into work feeling great.” Plus, the connections that Newton’s made in all of his outreach appear to be turning into the unofficial Bike Friday Club of New York City- several rides are already in the works! 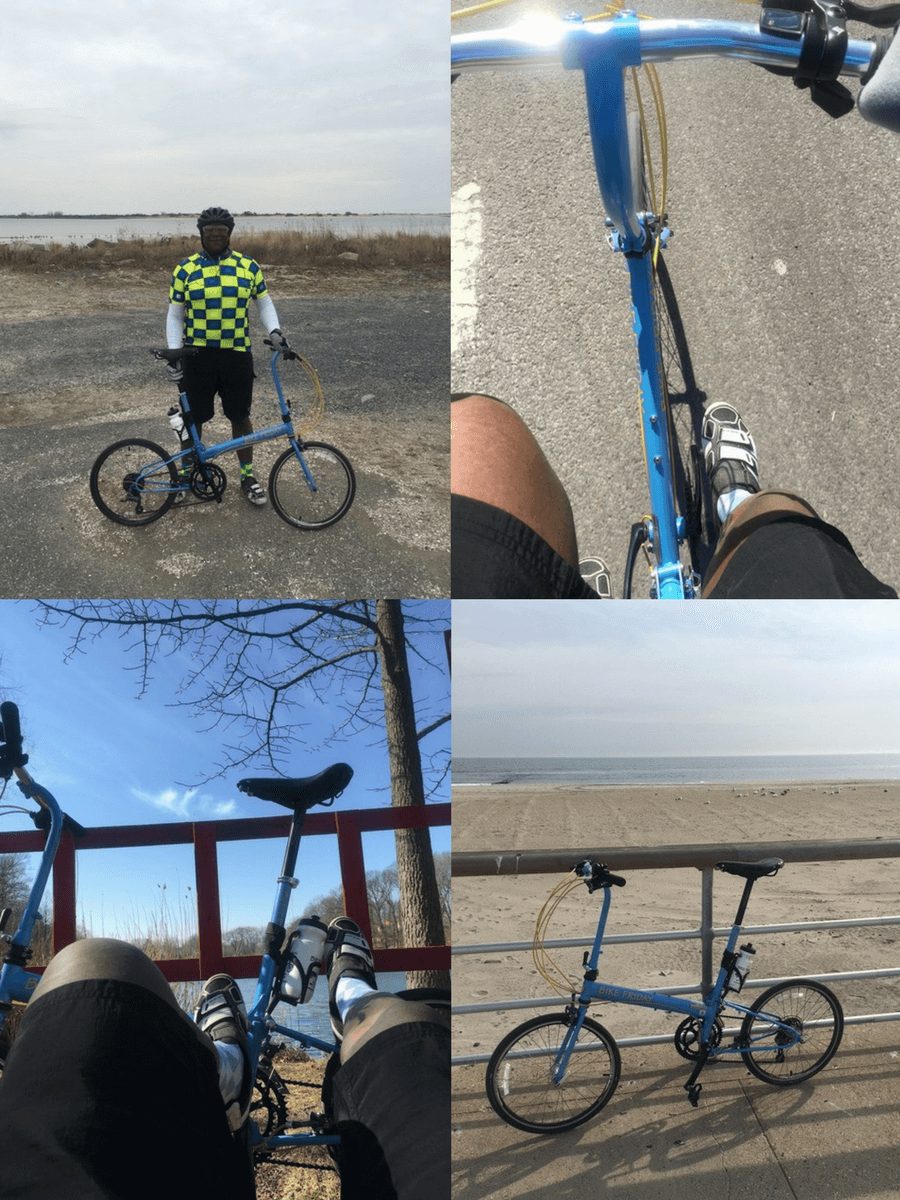 Taking a trip out to Long Island and back

Newton describes the Bike Friday owners he’s met as “more adventurous” than the average NYC folding bike rider. “If you have a Bike Friday you really want to go the distance, its not just about looking cool, its saying ‘I want to ride to New Jersey and back’ and then doing it.” As for the cyclists in the Big Apple who aren’t familiar with our bikes, he says they’re really impressed “On a hilly climb in Great Neck I caught up with a couple of riders and they were amazed with the bike.”

So what adventures does the future hold for Newton and his Rocket?

Europe. Before we could even finish the question, Newton had the answer, “I have dreams for this bike.” First inspired by the organized Brompton rides overseas, his aims have shifted now with his Pocket Rocket “I’m much more interested in doing climbs and long distance rides between countries. There’s this great site, Euro Velo, with routes to go between countries and the Pocket Rocket would be perfect for that.”

Newton, we can’t wait to see to pictures from your adventures in Europe, and updates from your group rides in New York City! Thanks so much for sharing your story with the Bike Friday Community. To join the new NYC Bike Friday Club, stop by  to sign up! To learn more about Newton’s awesome bike, the Pocket Rocket, click the link! 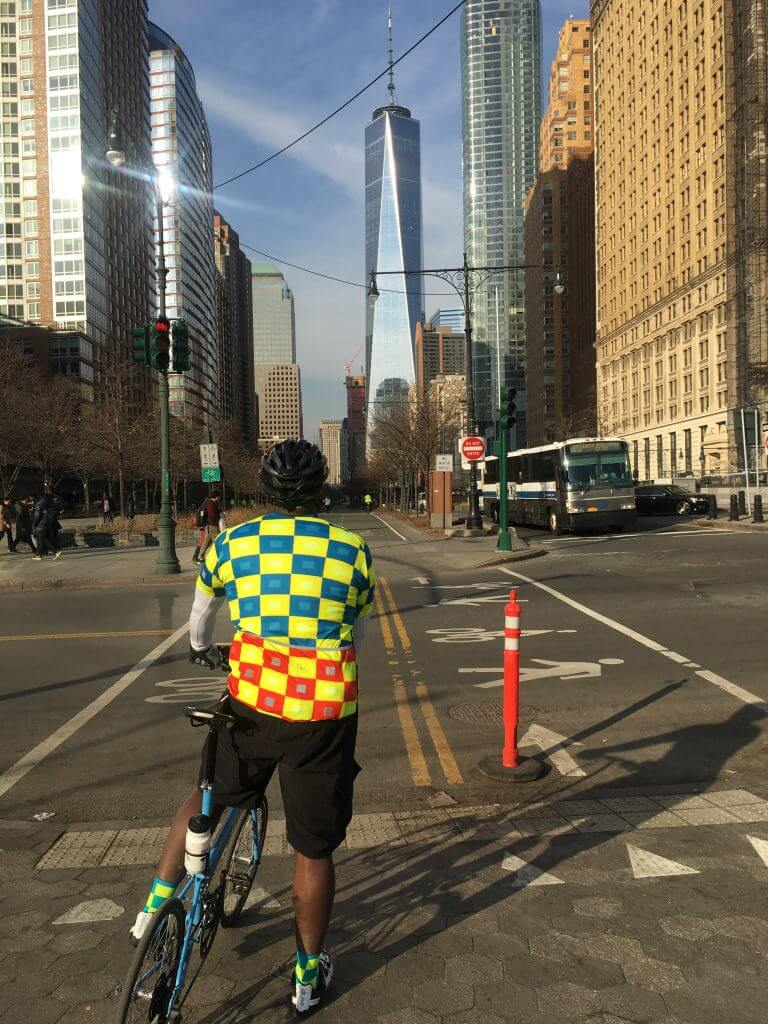 The One World Trade Center in Manhattan

8 thoughts on “New York City Adventures on a Folding Bike”