Mystery, Aha and Logic with Light Electric Assist on Bikes

My journey through the mystery

as a designer and cyclist

Aha! Electric Assist can be a logical choice for a “real” cyclist – it only took me 25 years to figure this out……so I wanted to save  you some time and share what I learned.

As cyclists, many of us have looked at ebikes and asked “Why bother?” or “Why complicate something as simple and pure as the bicycle?”. Most of the crew here at Green Gear Cycling are long time cyclists who love riding bicycles. Many of our customers are similar, folks who love the feeling of turning the pedals and rolling down the road under their own power.

For myself, I first really started noticing e-bikes in the 1990s. Back then they were heavy, with clunky mechanical connections and they made odd, irritating noises. And they were so, so heavy! A lot of those early machines seemed like electric motor scooters and I didn’t want a motor scooter. I wanted a bicycle.

Now I see that I really should give credit to those early experimenters. Although I didn’t want what they were selling, they were on to something. While I kept my focus on “pure” bicycles, they kept experimenting. They worked to make parts that were lighter and quieter. The big breakthrough has been in the area of batteries. The demand for lightweight lithium ion batteries didn’t come from the bicycle world, it came from the world of laptops and Tesla’s but modern e-bikes have reaped the benefits made possible by those high volume customers. Today, lithium ion batteries are light, powerful and relatively affordable.

Back in 1973, Scientific American published an article by S. S. Wilson which showed that a human on a bicycle was the most energy efficient moving entity on the planet.

Since reading that article nearly fifty years ago, I clung to the belief in the ultimate efficiency of a human on a bicycle. Perhaps that blinded me to some other truths: that individual humans vary widely in their riding challenges, abilities, and preferences. While I was happily riding around quietly and quickly, there were others who were not riding, or perhaps not riding as much, because they wanted or needed something more.

If you live long enough, eventually you learn something

After many years of ignoring e-bikes, I finally began to understand the appeal when I rode a bike with an electric pedal assist system. While this particular bike was not especially light, it was fairly quiet and unobtrusive. It still felt like riding a bike. I was still supplying the bulk of the power, but I felt like I was getting a little help, a little push. I felt like my younger self, on a good day, on a much lighter bike. It felt familiar.

A memory came back to me, I was 5 or 6 years old. I was on a bike, my dad was jogging beside me, his hand on my back, pushing me along. It was that little bit of assistance and encouragement that sent me down a road that I’ve ridden for years.

Starting early and getting training from a cyclist parent perhaps made me an above average rider in terms of strength, speed and endurance. I may be a fast rider, but it seems I was a slow learner. I delighted in riding under my own power and even took pride in suffering under conditions I was not up to. While I muscled through pulling three kids in my Burley trailer, other folks with more respect for their knees and stronger brains wouldn’t bother. But e-assist changes things.

With e-assist, a couple who might otherwise ride at different paces can ride together.

With e-assist, an older rider (like myself!) can keep up with his younger, faster companions.

With e-assist, that big hill between home and work suddenly isn’t so big. Now you don’t have to arrive at work sweaty,

Once I began really looking at e-bikes and not just dismissing them, I began thinking about them in the only way I could: as a cyclist.

Light Assist: E-bikes made for cyclists

There are approximately 265 million e-bikes in China, 10 million in Europe and about 1 million in North America. Most of those e-bikes are heavy, weighing in at 50 or 60 lbs (25kgs). They are built with the assumption that the rider will always be using some level of assist so there is a bit of a “weight doesn’t matter” mentality at work. While their popularity shows that there is a market for such machines, they are not what interested me as a cyclist. What if we built an e-bike for cyclists?

At Bike Friday, we’ve always known that weight really does matter. We make travel bikes and when our bikes aren’t being ridden, they may wind up being carried in a suitcase or folded up and taken on a subway car.  Any cyclist will tell you that a light bike is more fun to ride than a heavy one.

So when we set out to make electric assisted Bike Fridays we started by thinking about weight. Modern lithium ion batteries and motors mean that it is possible to build an e-bike that is light and still rides like a bike, even if you aren’t using the motor at all.

Another thing we thought about was what we wanted the motor to do. We didn’t want to make a motorcycle where you just turn the throttle and go. Our light assist is a true assist, it adds some power to your pedal power. You are still working, but you have help.

Our light assist bikes are designed to coexist nicely with other users of the road or trail. In e-bike jargon they are class one, they must be pedaled to engage the e-assist and the motor will stop assisting at 20 mph. You can, of course, go faster than that if you pedal harder, but it’s you making that speed, not the motor.

Its not about going faster its actually about spending less time going slow!

Now you might be wondering, as our mechanic Kent Peterson did, why would I bother adding a motor at all? What Kent and I both discovered is that as Kent says, “it’s not about going fast, it’s about spending less time going slow.” With light assist, we climb hills faster with less effort. We get across busy intersections quicker. By spending less time going slow, while our top speeds remained the same, our average speeds went up. In Kent’s case, prior to converting his bike to light assist his average commute speed was 13 mph. With light assist, his average went up to 16 mph.

We discovered some other interesting things on our commutes. For one thing, our door to door times became much more consistent. On days when I feel strong, the motor does less work. On days when I might not feel so perky, the motor takes up the slack. On days when I tow a trailer to work, it doesn’t slow me down. The light assist helps carry the load.

The most surprising thing we found was how little power we used. If you read up about e-bikes, you’ll find a common estimate suggesting that you will probably use 20 Watt Hours per mile. While that might be an accurate figure for some of 50+ pound e-bikes, our light assist bikes, being far lighter use far less power.

After a month of commuting, Kent and I compared notes. We both found that we were riding all week between charges and found we were using between 5 and 6 Watt Hours per mile. Instead of the industry predicted range of 18 miles from a 360 Watt Hour battery, we could go more like 60 or even 70 miles. I set my bike up with a tiny 150 Watt Hour battery (weighing just 1 kilogram or 2.2 lbs) and even pulling my trailer I could still go 25 to 30 miles!

Of course, as the saying goes “your mileage may vary” but if two sixty something old guys can get mileage like that then maybe you can too!

We can make a light electric assist Bike Friday starting at 23lbs total!

So how much weight does adding light assist add to your Bike Friday? Our light assist systems will add  anywhere from 7 to 13 lbs to the weight of your bike, depending on how big a battery you need. You will have a bike that still rides like a bike. We can make an Electric pakiT compact folder as light as 23 lbs. An Electric Pocket Rocket, folding road bike, can be as light as 31 lbs.

Light assist isn’t just for lightweight riders. Our Electric Diamond Llama can be ridden by riders up to 330 lbs, but the bike itself, including the electric assist, can weigh as little as 38 lbs. Our Electric Family Tandem can be as light as 51 lbs. Our Electric Haul-a-Day starts at 48 lbs and can haul a family of three!

I hope this helps you along the mystery path to your own clearer understanding of how an electric assisted bike can help you, or someone you know, to ride longer and more often than they did before. 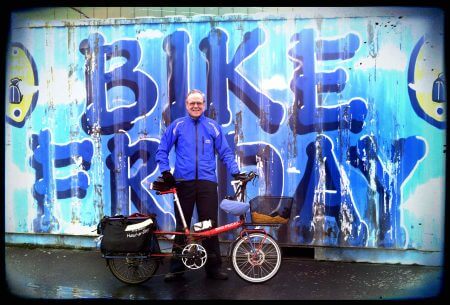 3 thoughts on “Mystery, Aha and Logic with Light Electric Assist on Bikes”