Out takes from the diary of Carl Hemmings 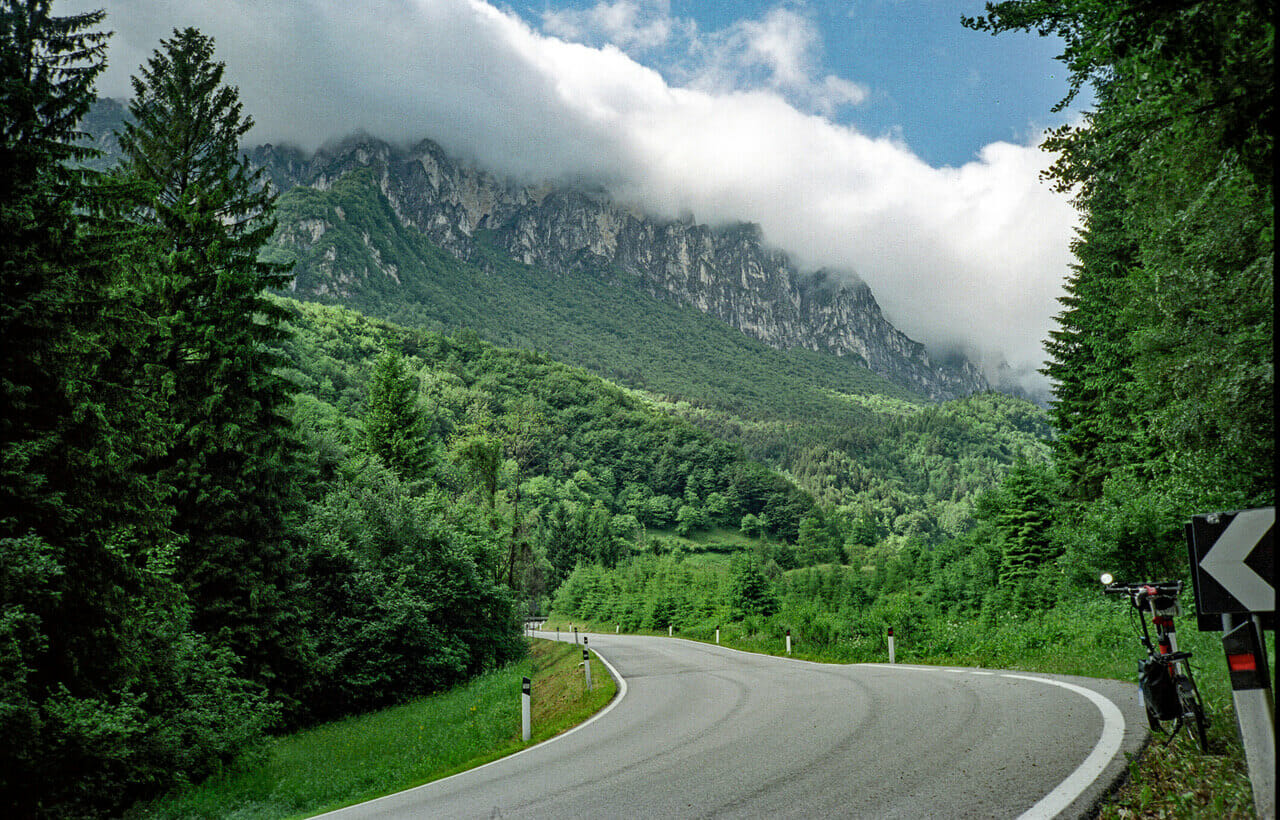 Well I’m well on my way to another adventure with my Bike Friday New World Tourist. I am living in the Czech Republic at the moment, I caught the train from Plzen (beer capital) to the capital Praha, to get the bus down to Verona Italy. 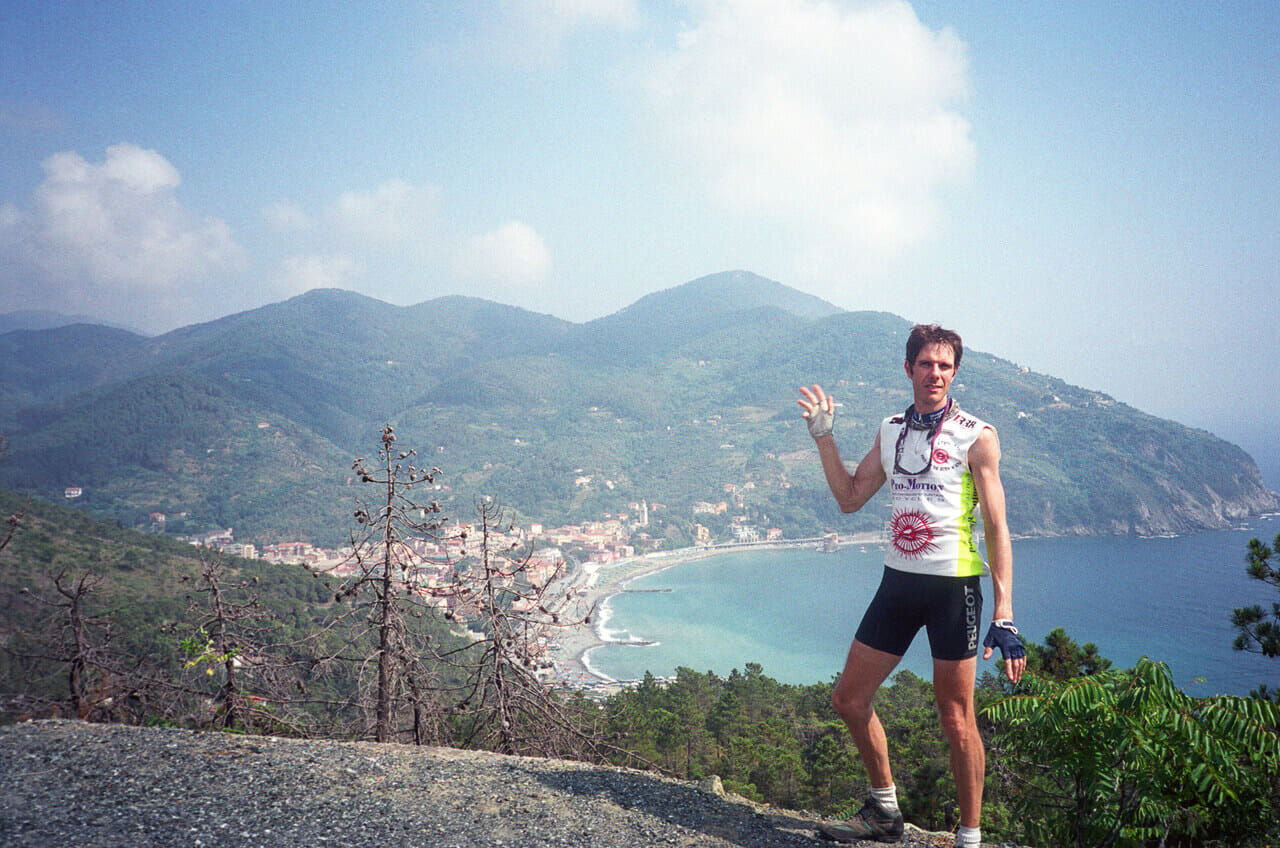 The past 15 days I have spent cycling around the Italian Lake area. Now in the Romeo and Juliet town of Verona Italy. I wanted to see a bit of the Giro de Italia bike race. I camped in the gardens of the Youth hostel, the cheapest so far L8000 ($7 Australia) including breakfast and a cellar toilet/shower room which when the sun shone through the stained glass window gave an appearance of a holy shrine. I met an American cyclist who had ridden from Napoli; Joseph was his name we ended up hanging out together. We planned to make a early start to ride to the top of Lago di Garda (80 km) to watch the Giro de Italia come past, but it was such a glorious day, when we saw a vacant table in the piazza, we called it ours, and sat back and watched the world pass by. We did see some of the Giro, from a cafe TV! 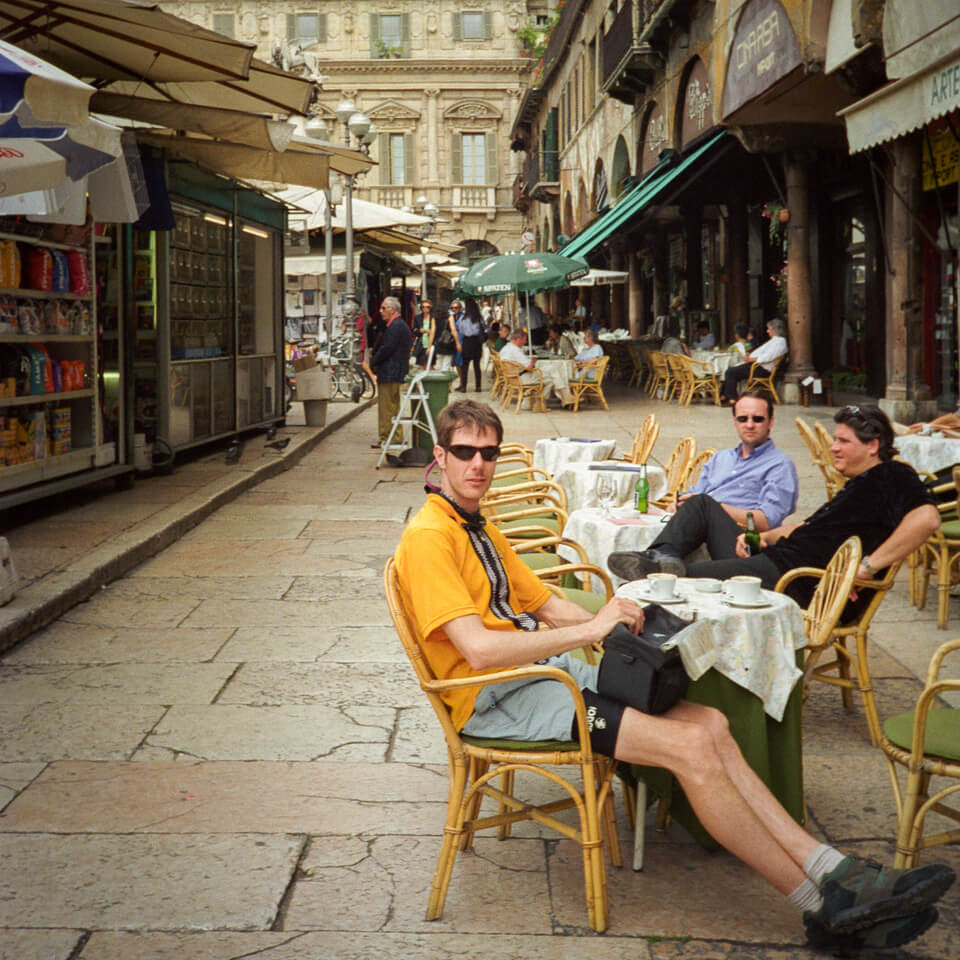 I enjoyed Verona, the city has a good feel to it, and I cruised around the narrow streets on my small-wheeled Bike Friday getting many curious looks from the well-dressed Italians. Most Italians cheer when they see me, they call out “bella bicelletta” (beautiful bicycle). As I rode the city of Verona, I’m mixing it with 14 year-olds on motto scooter’s who have mobiles plastered to their ear as they ride, old ladies on old bikes, as well as the rich in their Ferraris. Back home I would mind, but here I just except it as the norm & blend in with the rest. You would think there were no rules, everybody going there own direction down the narrow streets.

I made my way North to Lago di Garda the next day, as I was passing a small village cafe, the owner called out “where you from?” As soon as I told him I was from Australia, he came out with a free pineapple juice. Later in the day an Italian couple on a Harley Davidson motto bike, came over and were so impressed with the bike they took a photo of it. 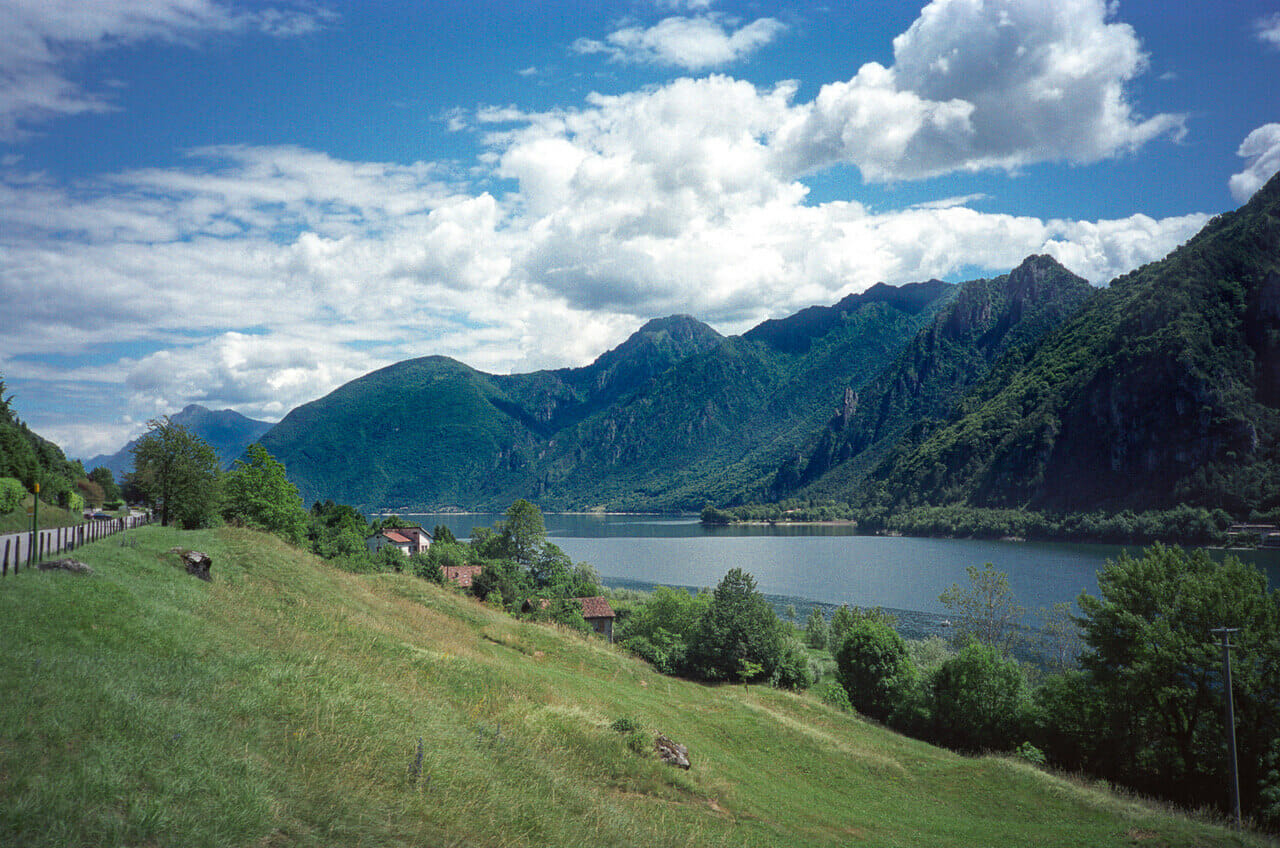 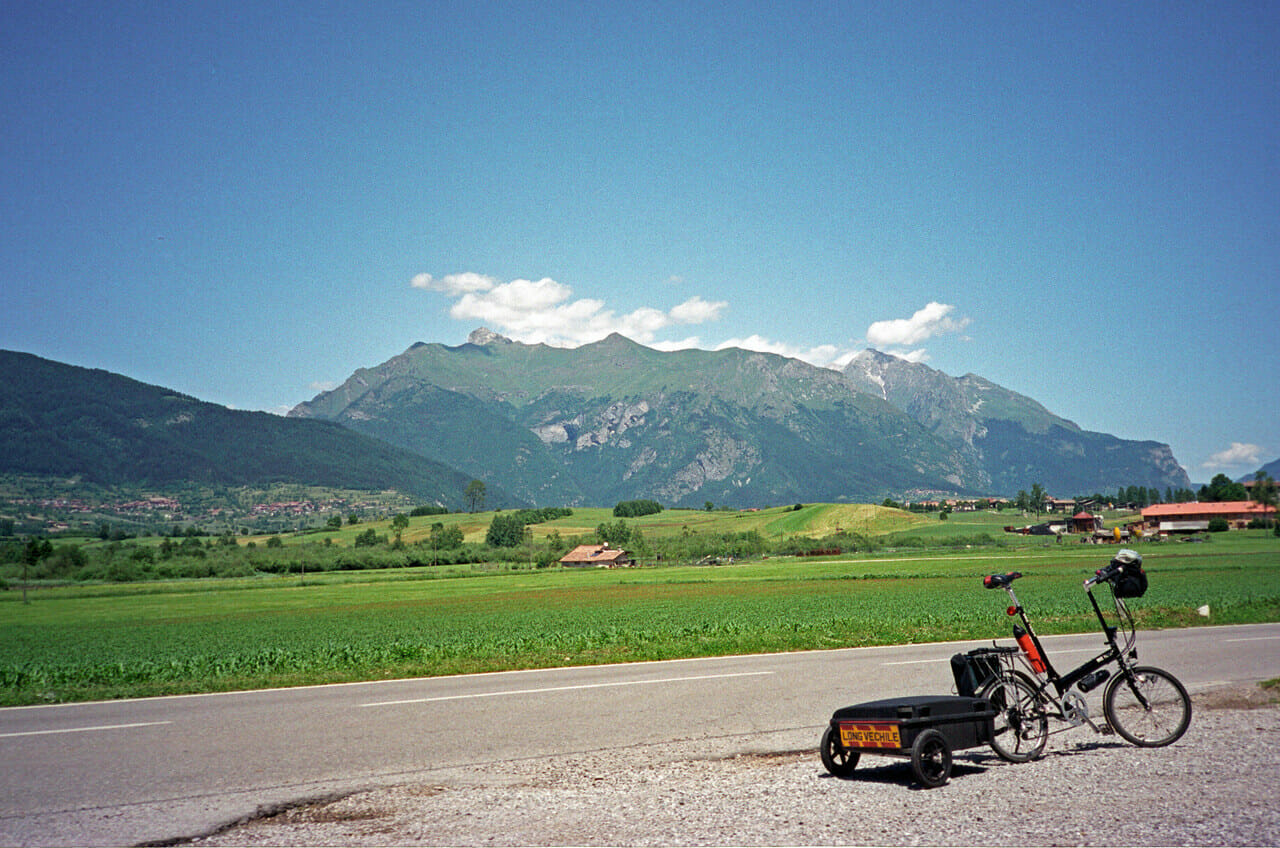 Cycling round Lake Garda, was a like a little bit like riding around Melbourne’s Port Phillip Bay with Mountains as extra scenery. There was a lot of people out just as to be looked at, and lots of traffic. At one stage a group of 100 Vesper motto scooters came past me, there horns beeping me for encouragement? 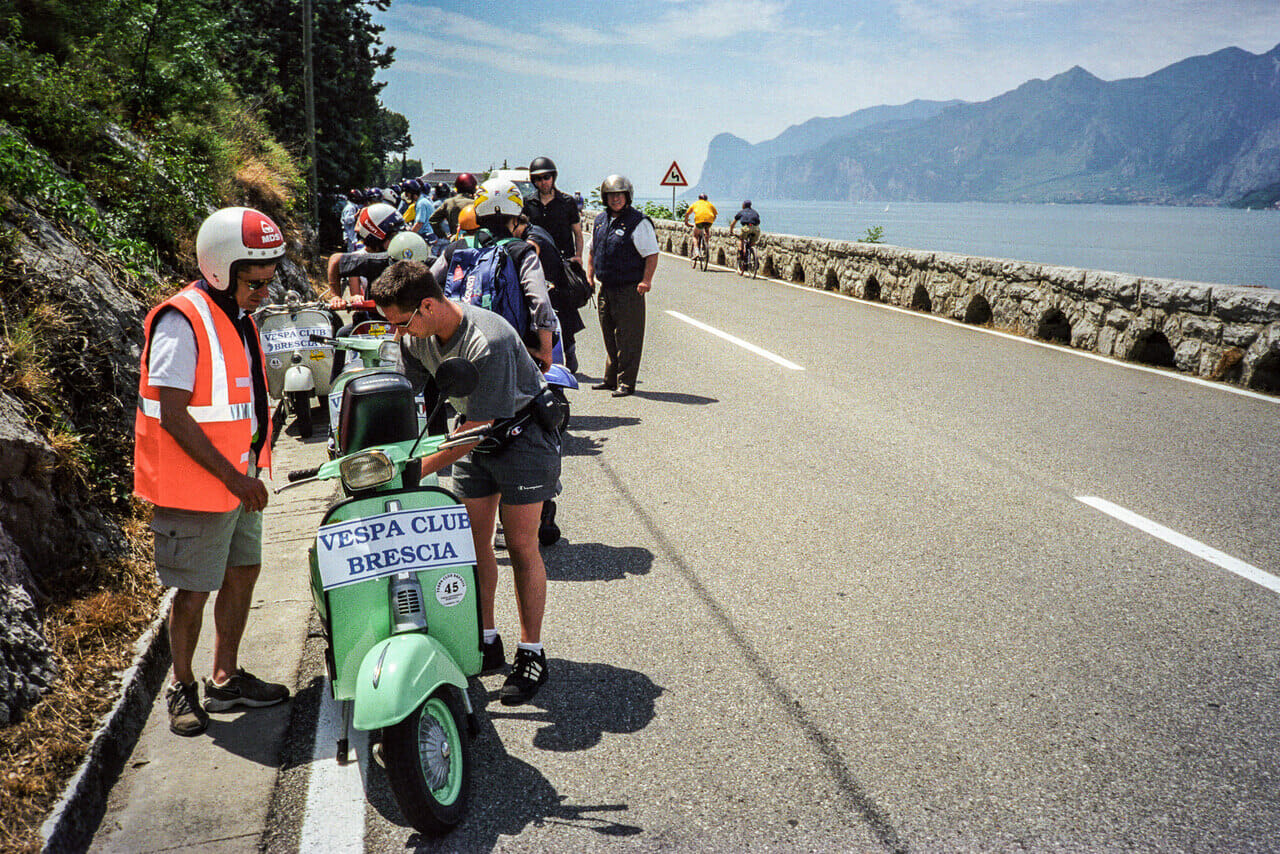 I continued to Lago di Tenno, then the Madonna di Campiglio 1600m, it’s the mountain finish of a Giro stage won by Pantanni, as I climbed I had awesome views of the Brenta Gruppo Dolomites Mountains which peak at 3200m. Words or pictures cannot convey the view before me, the best I can do is, “awesome.” 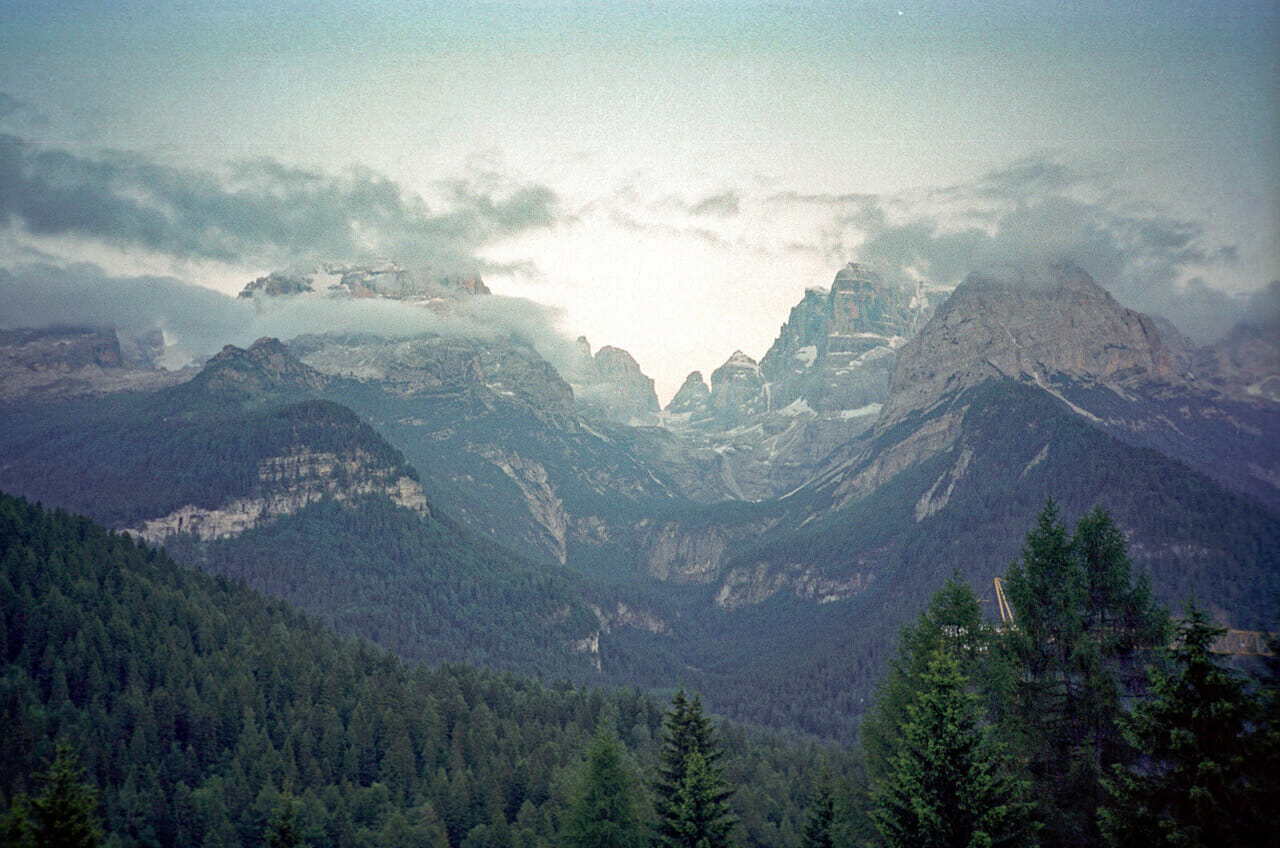 It was getting late when I got to the top of the climb, nearly 9pm and no campsite could be found, so made a super 10km dash down the mountain to the village of Carisolo to sleep for the night.

In the last 3 days or so I cycled Lago di Iseo, Lago di Garlate, and now Lago di Como. I rode up to the Madonna di Ghisallo; the chapel dedicated to the sufferings of cyclists. I needed a bit of a breather before I went in the chapel, I felt a little light headed from trying to keep up with an Italian racer out on a training run, my legs felt like jelly as well. I entered the holy shrine, mounted on the chapel walls, were bicycles from the 1920 Giro di Italia, bicycles from the Italian champions Coppi and Bartalli, Francesco Mosers hour record bike, the Belgian “cannibal” Eddy Merckx orange machine, and the tragic reminder how dangerous professional bike racing is with the young 22 year old Fabio Castelli twisted bicycle, sustained in a decent of the Pyrenees mountains in the 1995 Giro race, he passed away on the mountain top. Also on display were jerseys from cycling legends, Migel Indurain, Greg Lemond, Merkx, Gimondi, Bartalli, and Coppi, to name a few. It was all overwhelming. There have been plenty of little hard hills, the humid weather making them extra hard. I have been a little disappointed with the amount of industry around the lake area. But I have met plenty of friendly/helpful people along my way, and must decide in what direction to ride next. 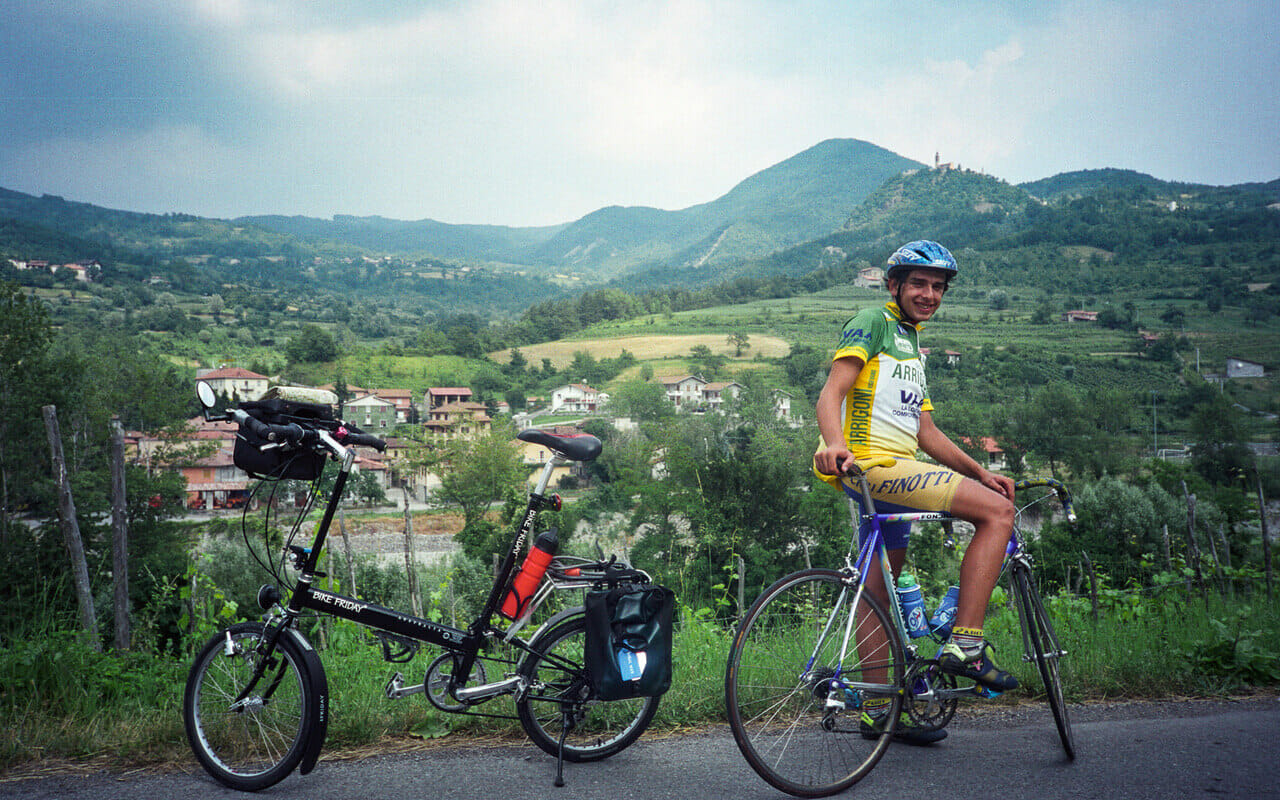 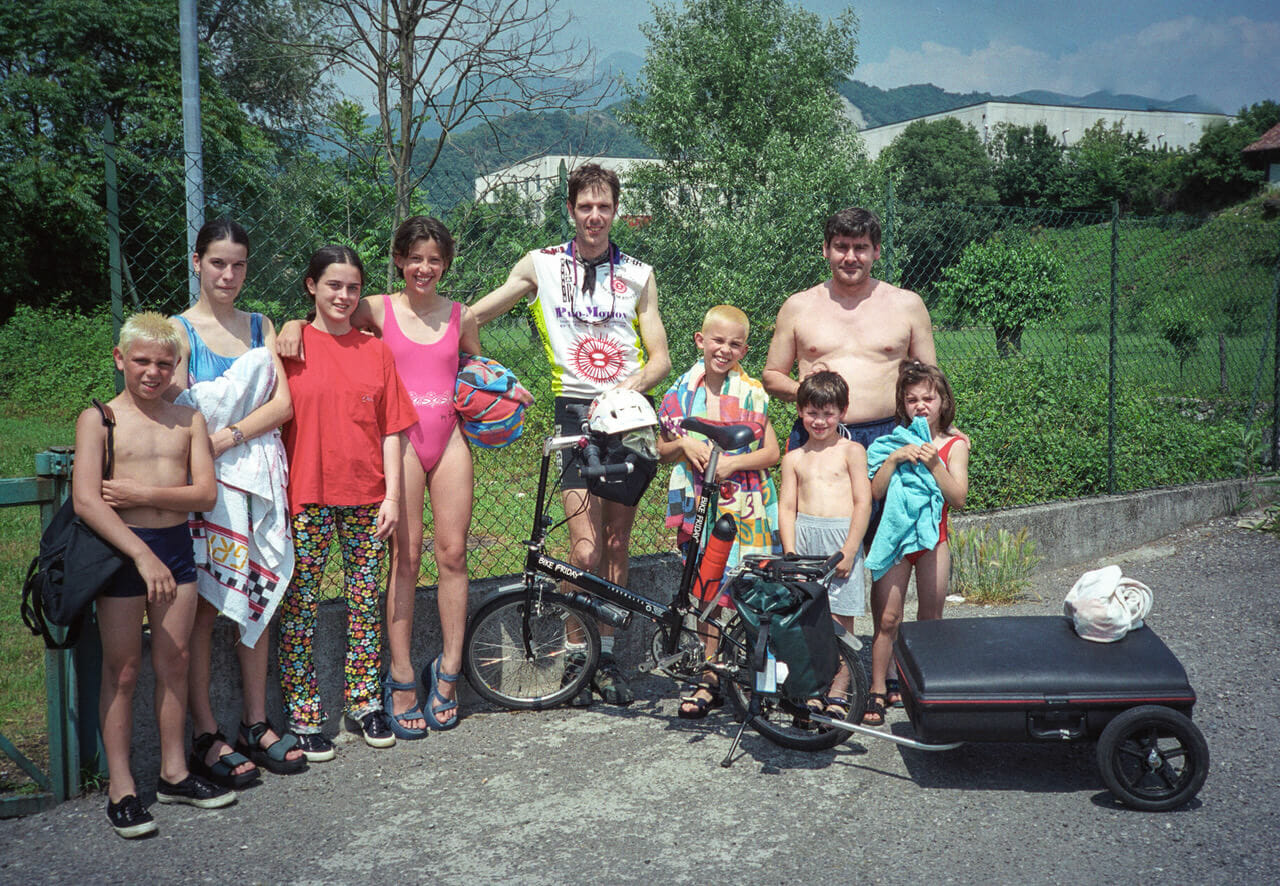 From Lake Como I decided to head South towards Genova, I didn’t leave the city till 3pm! I paid for my indecision on which direction to take, I had to combat large truck traffic, gust of wind that nearly made me come to a stand-still, so I got of the main road into the small villages. I got lost in the spaghetti like roads which followed the steepest hill they could find. I made it to camp at 9:30pm totally exhausted. 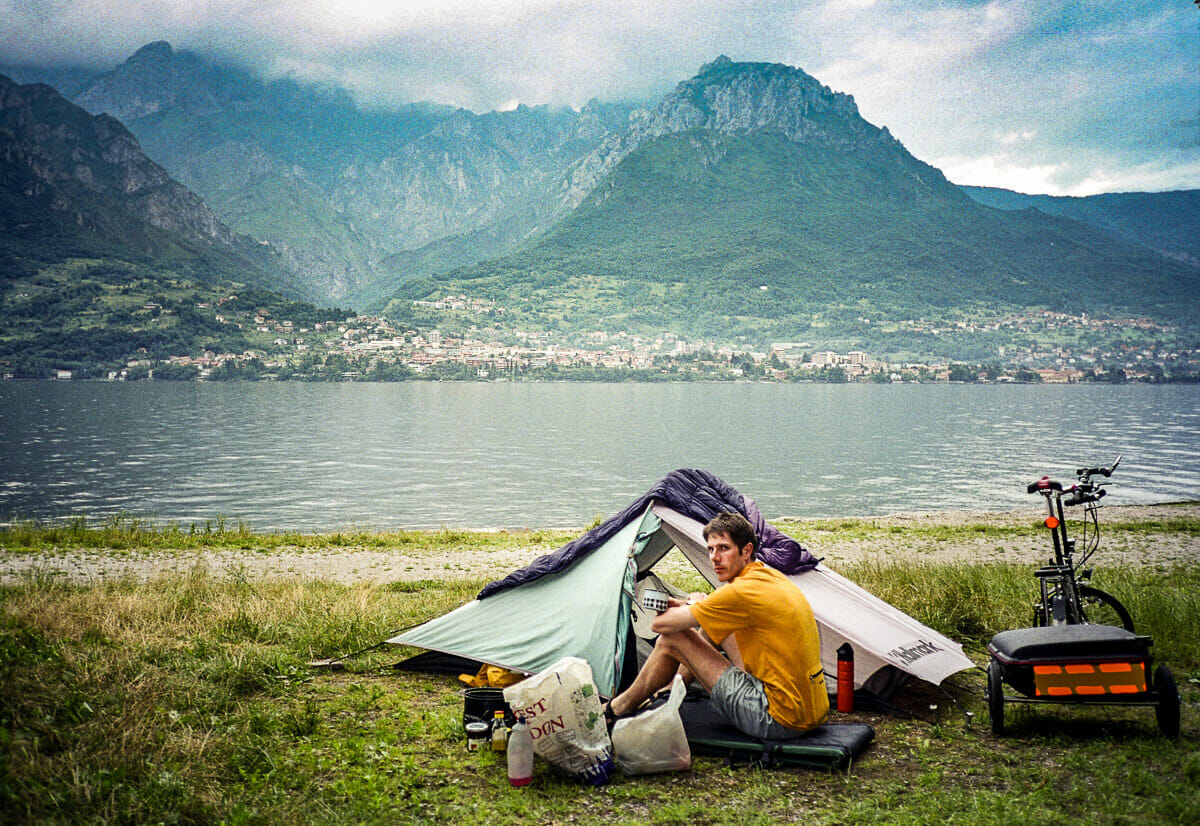 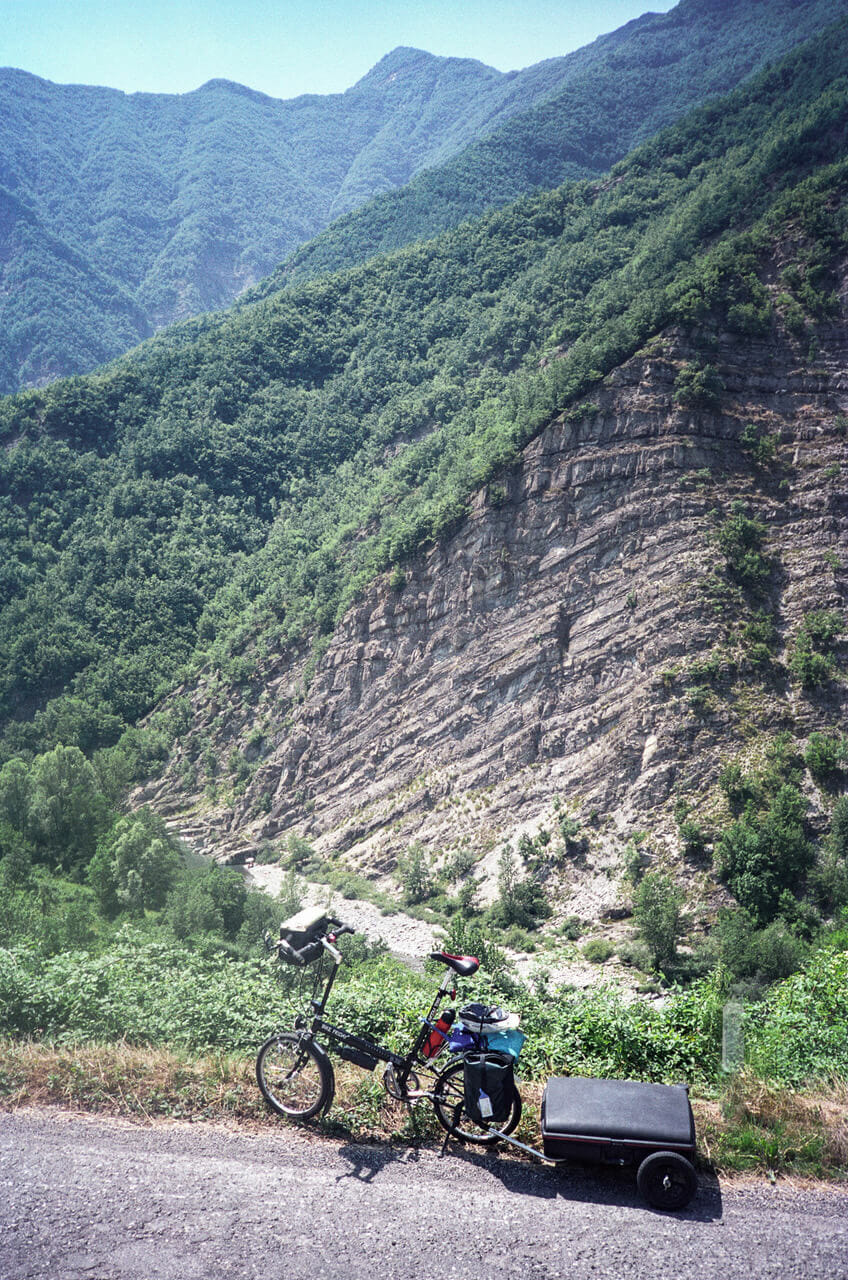 On the way to PAVIA (35km Sth. of Milano), I took a side trip to village called Morimondo for a shot of espresso to pep me up. It was a nice surprise to be greeted by a monastery & open trattoria. That’s where David & Cristina from Milano invited me over for drinks. I had a wonderful afternoon eating gelato, sipping vino, espresso & enjoying “la Dolce vita” -the sweet life! I bid farewell, hopped back onto my bike feeling “happy”, for the 20km ride to PAVIA. I couldn’t feel my legs, there wasn’t the usual discomfort in the groin area, I find when I have a little alcohol in my system it makes me ride harder. So when a old man buzzed past me on his moped, I accelerated & jumped onto his wheel (followed him). I was on “the big ring, & on the rivet”, to try to catch him! Once I was in his slip stream, we cruised along at 35 -> 40km/hr, it was great to do some motor-pacing. Josep said, “You have made it into the outskirts of PAVIA in half an hour.

PAVIA has a university, so it’s a lively city with a great old town centre. I explored Pavia city on foot, I have sore right knee the result from pushing it yesterday, sitting behind that moped. The Province of PAVIA is a beautiful area made up of small sandstone mountains (1500m) & many wine types to choose from. 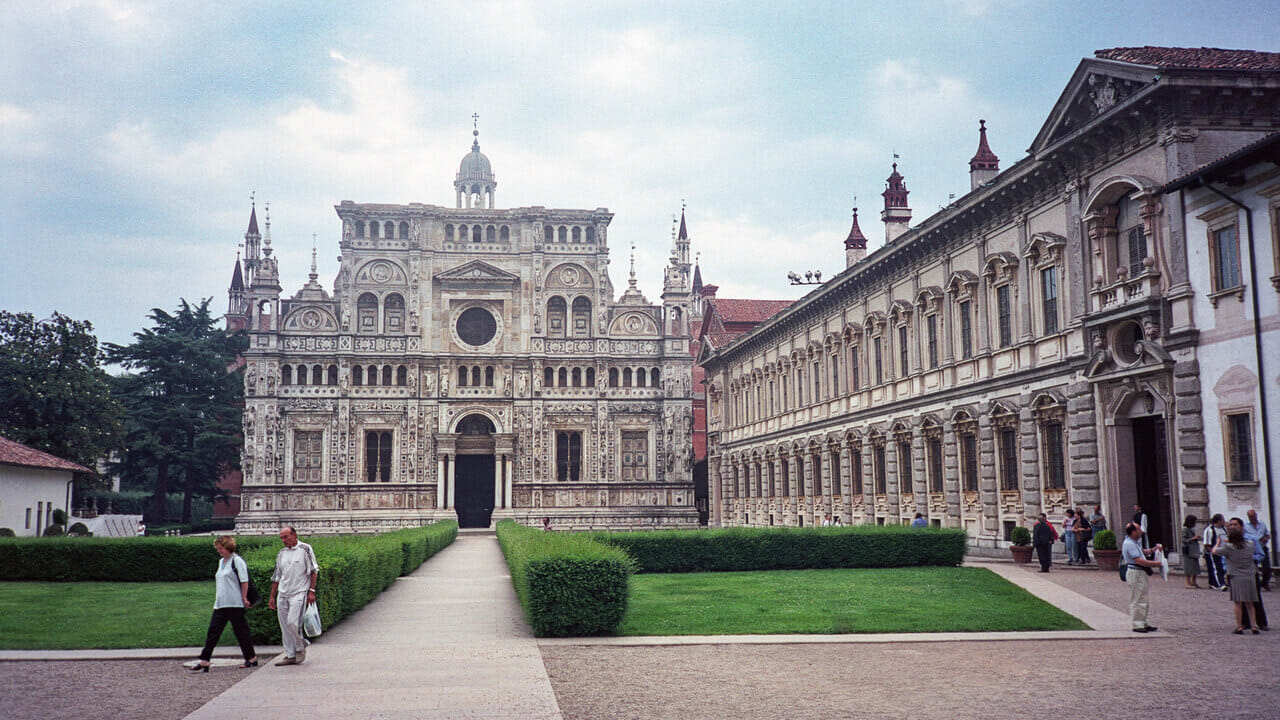 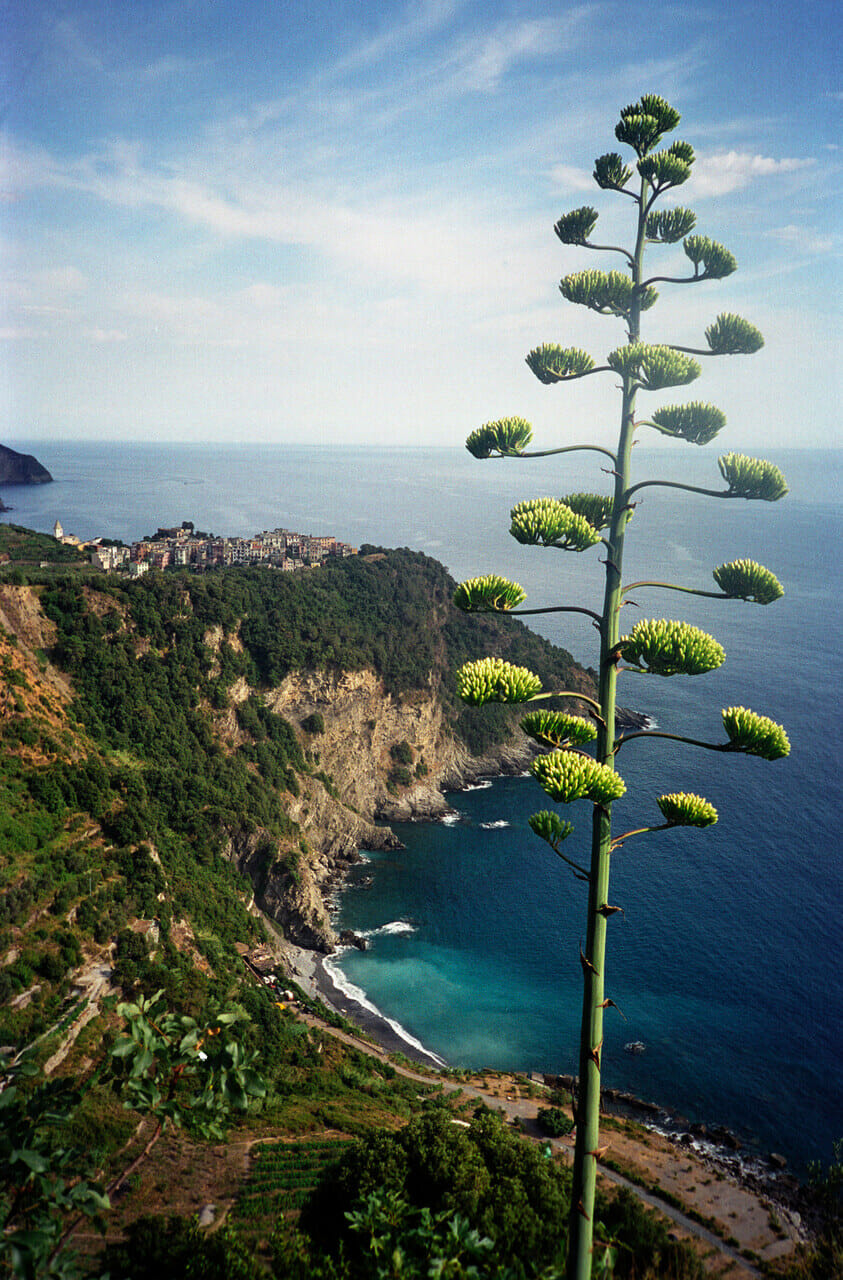 To get here, I had to go through 4 x 3km “Black as Black” one lane tunnels, my dynamo-light hardly making an imprint in the ink like soup.

As the trains were on strike today, I rode my bike the hilly 5km out of Levento to the next village of Monterossa al Mare, the road twisted & turned back on its self many times & for ever going up! I imagined myself as Pantani, out of the saddle going for a stage win, it felt easy climbing with no luggage, but I think there was some assistance from a tailwind.

I reached the top of the climb, then it was a steep 7km downhill to Monterossa al Mare. I didn’t think much of Monterossa al Mare, it was nothing special, the other villages of Cinque Terre were much nicer. I didn’t stay too long, I had a bit of a light head from the climbing to the village, so sat on a seat watching the sunbathers & ate some peaches.

Rain clouds started to roll in, & light rain fell, it was refreshing. Dim light now, I saw a set of yellow lenses glasses for sale at a stall, which looked cool, they fit well for bicycle riding, so I bought them for L27 000. They made a huge difference in the low light, most cars had there headlights on in the low light, with these yellow wonders on it seemed like it was normal daylight. 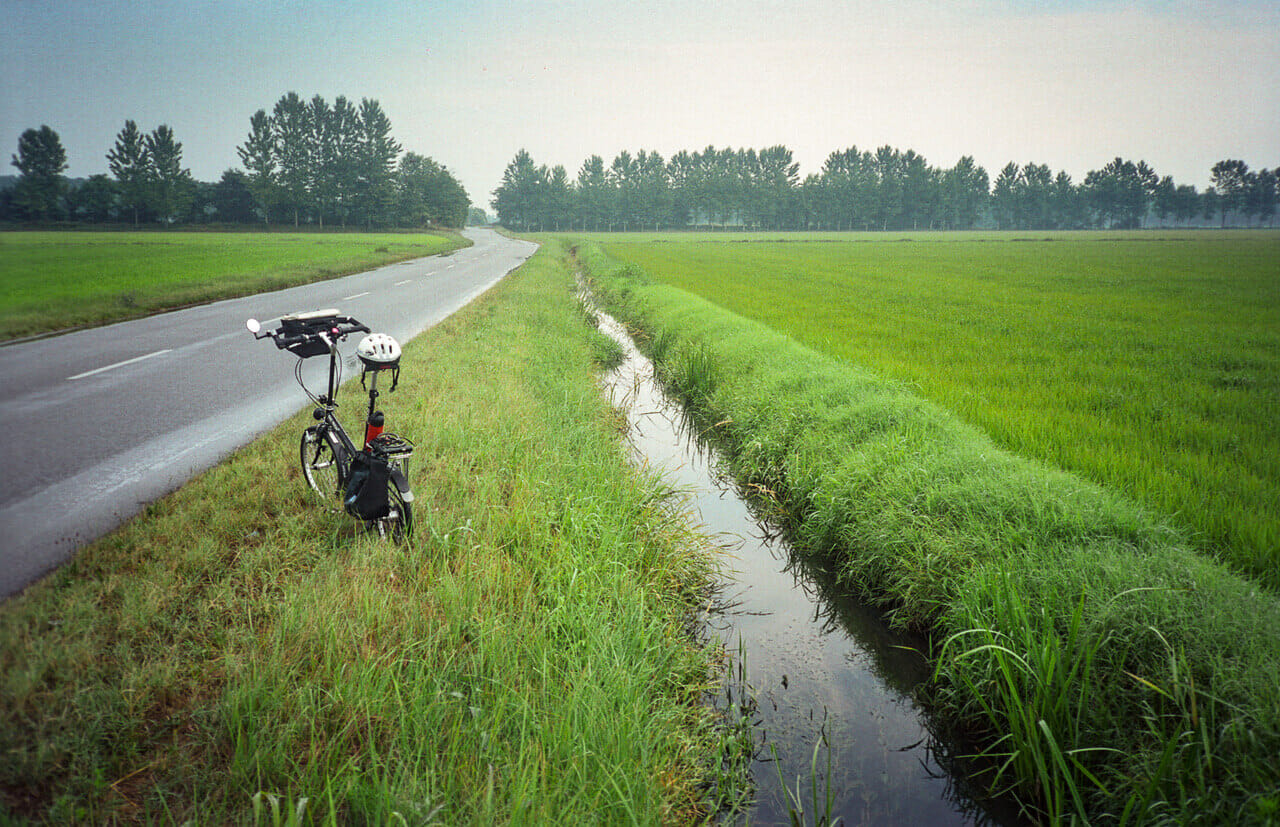 This time I took it easy up the 7km uphill out of Monterossa al Mare, I needed to go to the toilet at the top, I saw a little old hut next to the side of road. I was just about to go, when a cattle dog came running out from a underneath a parked boat barking at me. I thought he was going to go for “it”, I nearly wetted my pants!!

Thats all for now, stay tuned for my ride around Island of French Corsica.

To learn more about the bike that Carl used to tour Italy, visit the New World Tourist page!