We recently caught wind of an epic annual camping event in the Oregon Outback- Descend on Bend. 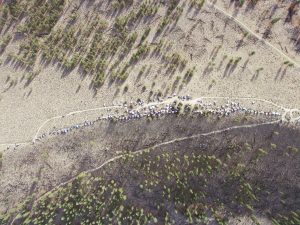 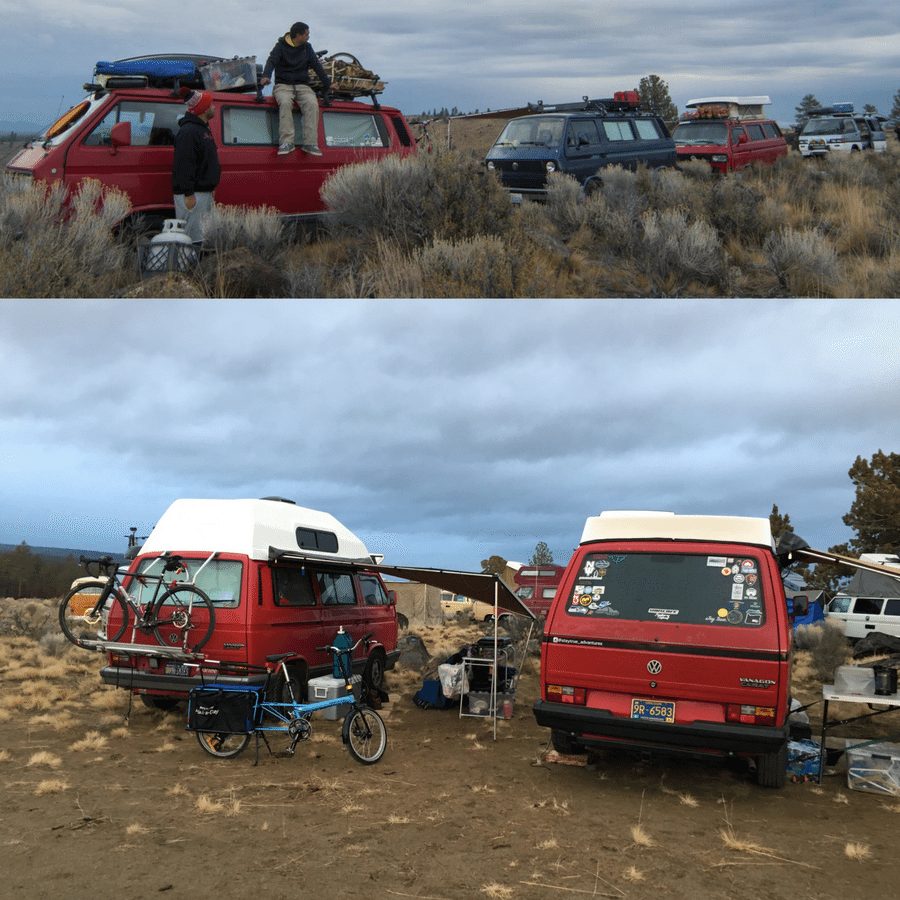 .
Bike Friday owner Fel P. tipped us off to the raucous Vanagon inspired gathering, after he took his family’s Haul-a-Day, along with their Vanagon, Arielle, along for the adventure.
.
From Fel:
.
Descend started through a social media post mentioning the need to gather Vanagon owners up here in the PNW, as many Vanagon events happened further south in California. It was Ryan (@poseidonsbeard) who got the ball rolling in the spring of 2014.
.
For the inaugural Descend on Bend in the fall of 2014 we gathered 18 vehicles and about 35 people, many of whom did not know each other.
.
DoB Dos, in 2015 we had was just over 100 vehicles, if I remember right. And DoB Tres – in just 2 years time – over 300 vehicles registered, but weather predictions kept a few away and we saw roughly 275 arrive in the Oregon Outback throughout the weekend.
. 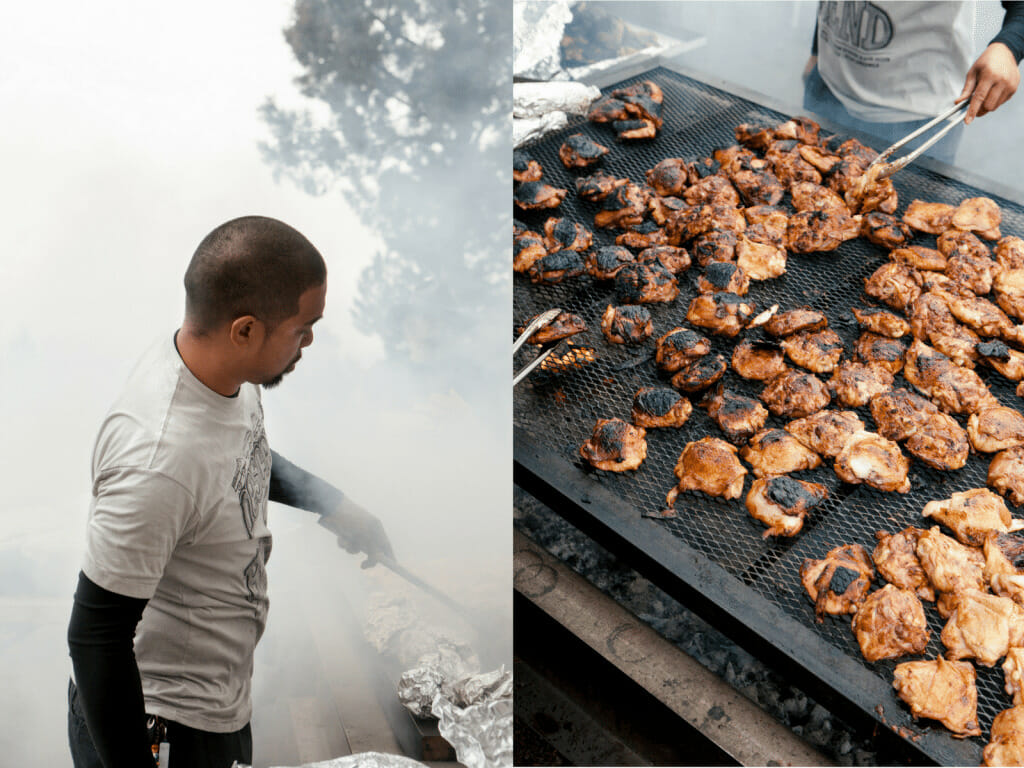 .
The event overall is just a relaxed camp out in the Oregon high desert. Going off grid for a weekend to connect with nature and with others that enjoy it just the same. The grill. I don’t even know what to say about that. Dave @vanagonlife is THE MAN. He built that exactly 1-week before DoB Tres, through the middle of the night in his shop. He finished it Sunday morning just in time to load it up to begin its journey out to the Hole-in-the-Ground.
.
My family and I have connected with some of the most amazing and genuine people you’ll ever meet. As Ryan puts it: “Humans being.” No muss no fuss, just a like minded group of folks with a sense of adventure. My son, Xavier, who has been to all 3, talks about DoB often. He’s already talking about next year 🙂
. 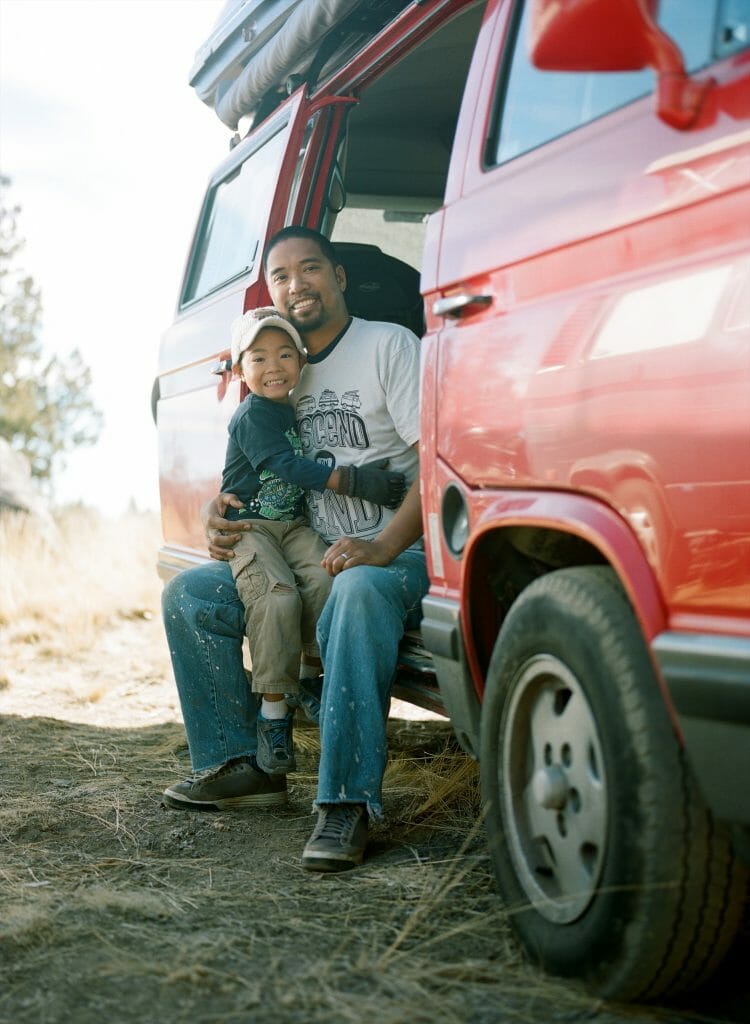 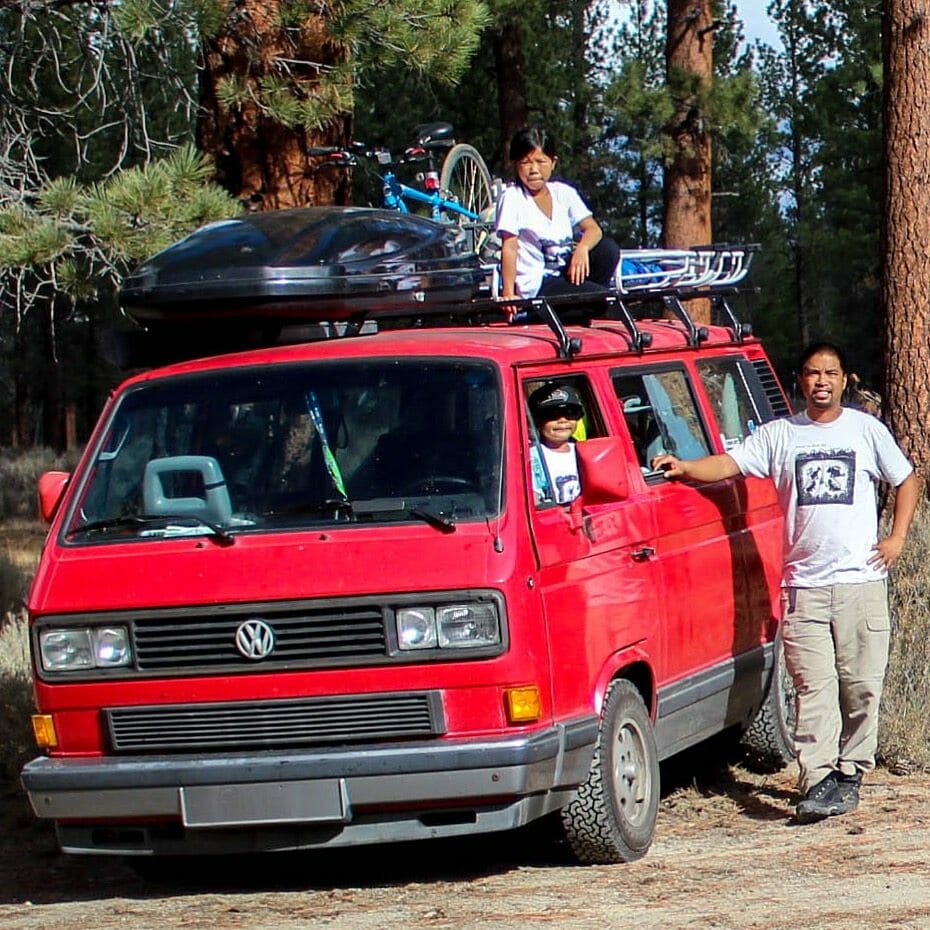 .
All 3 years I brought a bike. First year I didn’t even pull the bikes off the rack (hybrid + WeeHoo). Second year I did set up the hybrid + WeeHoo but it was only so I could say I actually used the bikes. My daughter had her bike too, but hadn’t been exposed to much dirt riding and the road out there is almost primitive with lots of large rocks and tire ruts, so she wasn’t confident riding. I used the WeeHoo with my son in it and, I too, wasn’t confident enough that I wouldn’t dump him. In the end it just didn’t work out right in those conditions.
. 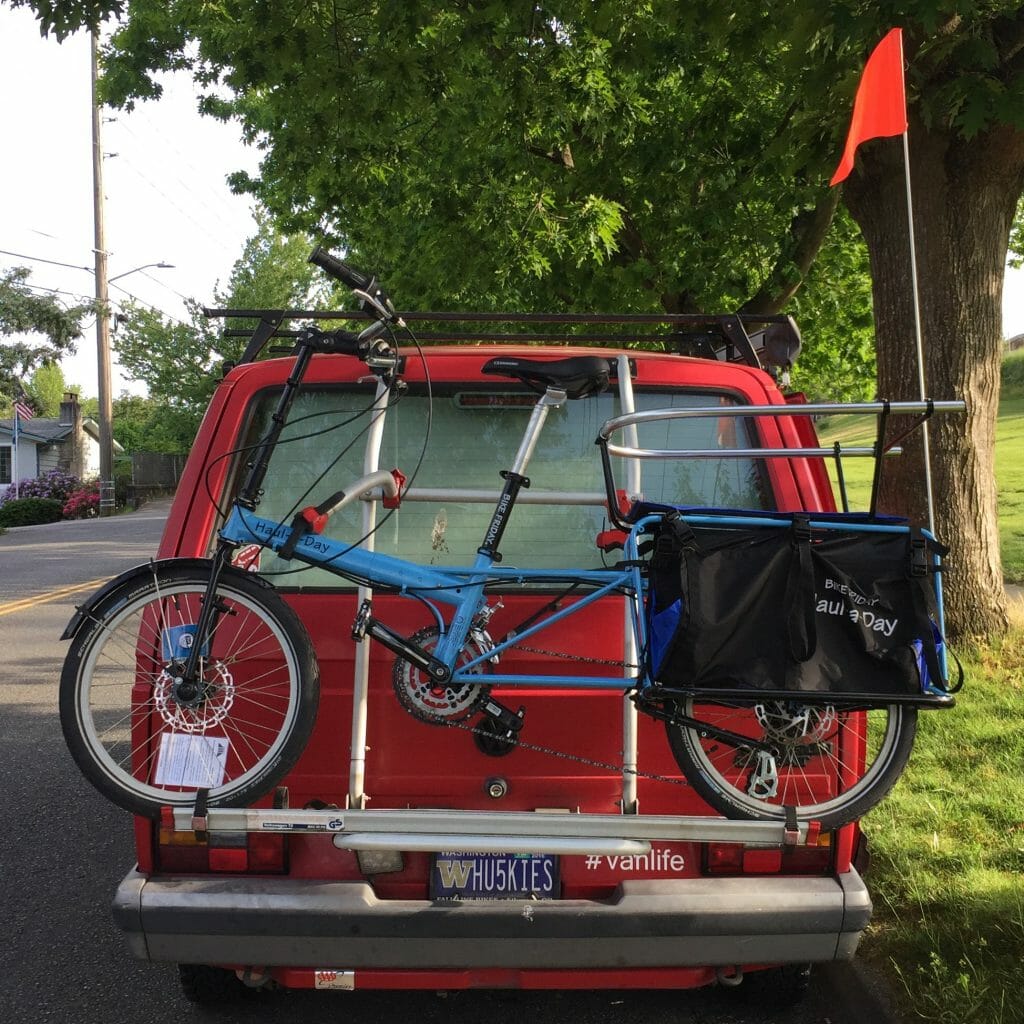 .
This year, having the HaD I knew I’d be able to get some pedal time in, only needing 1 bike for me and the 2 kids in my van. The ease of pulling it off the rack and getting loaded up within seconds is exactly why I brought it. Convenience.
. 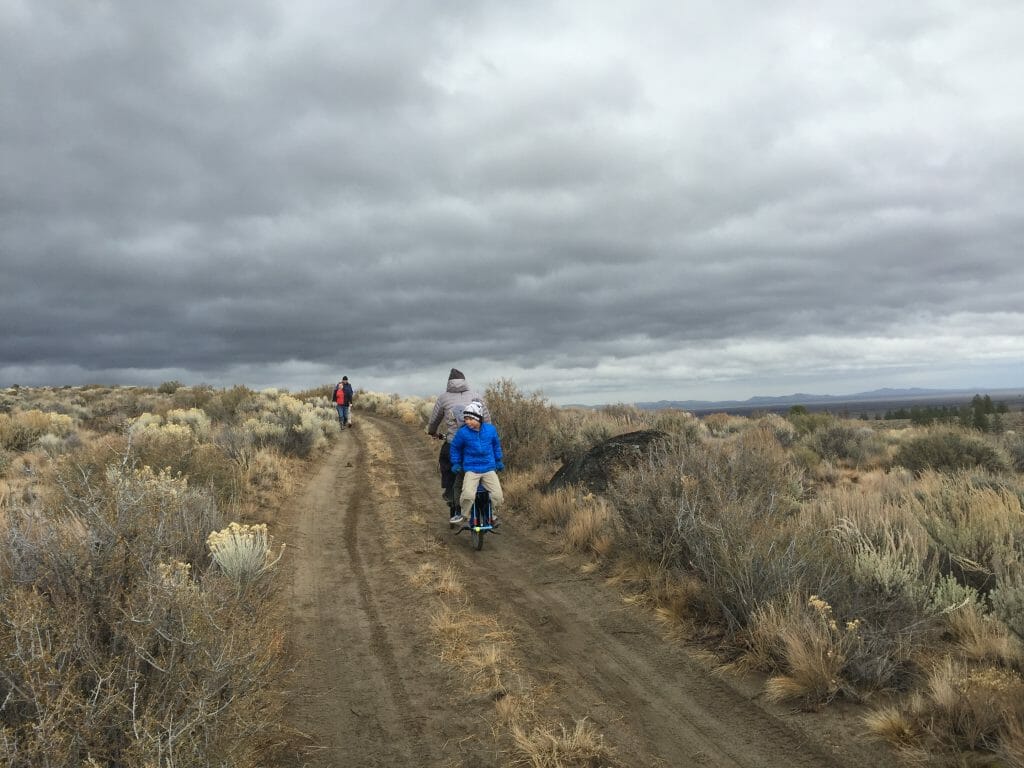 .
We cruised the entire road that went around the rim of the crater. Touring other van-camp sites spread out through the area. I also used it to bounce back and forth to different camp fires over the 2 nights.
. 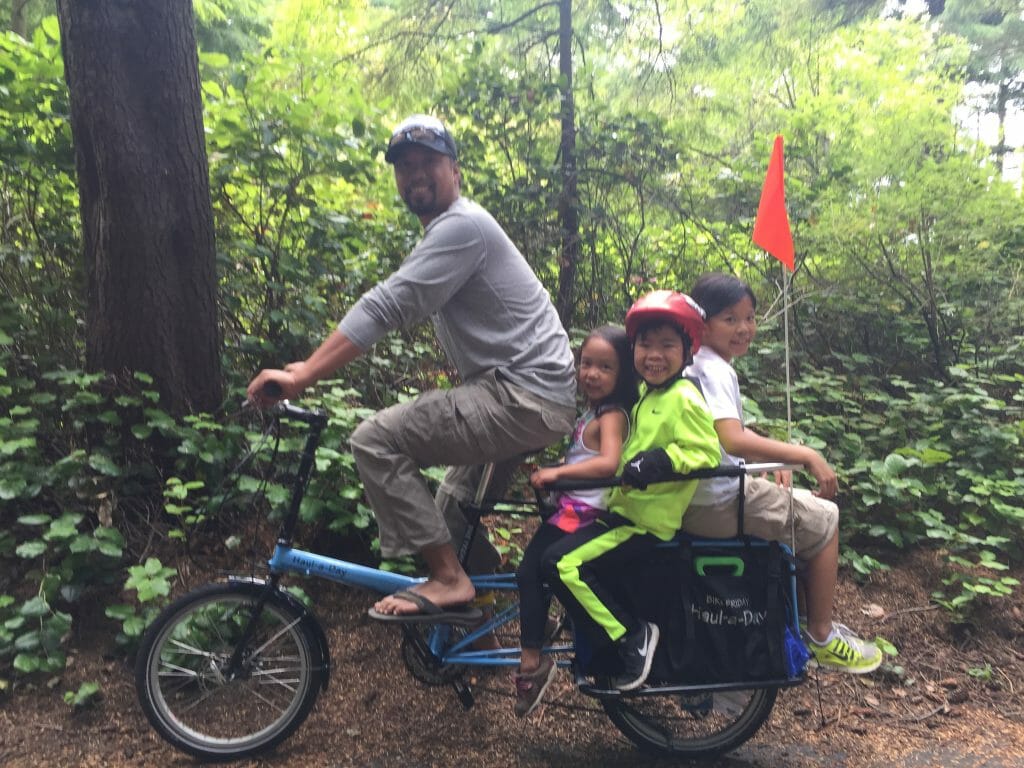 .
After the 2nd mile of off-roading, the pedaling with the two boys was wearing me down. little did I know, Kenji (friends son) while facing backwards on the tail of the cargo was dragging a foot every now and then leaving a trail in the dirt acting kind of like an anchor!
.
.
My biking started when I was in grade school, with the bmx-style bikes then upgrading to a “10-speed” but eventually learning to drive and then not having a bike through most of college… that all changed in 2007. I said to my best friend I grew up with: “man, you’ve been talking about this STP (Seattle to Portland) thing forever, let’s just do it.” We found ourselves some road bikes, recruited a few other friends and set out for a 1-day STP adventure. I did STP two more times and have been rider support every year since then. 2017 marks my 11th participation in STP and the 10yr anniversary, so I’ll be coming out of retirement for it. But the most enjoyment I get when out on two wheels is sharing the experiences with my family.
. 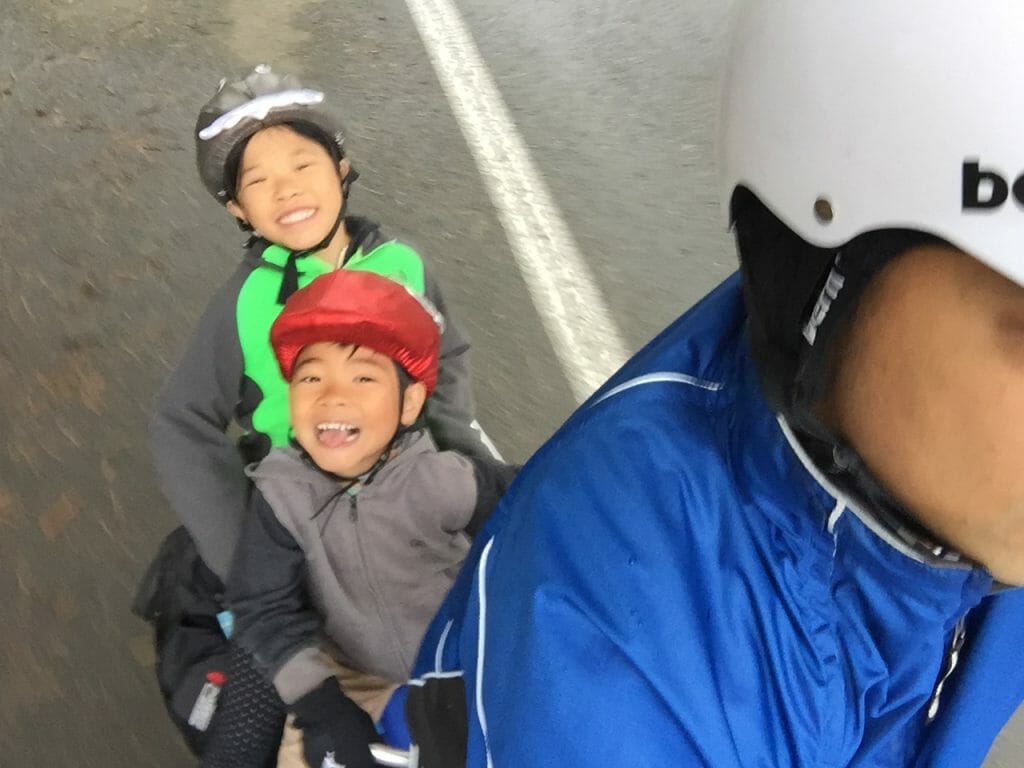 .
Our family biking experience evolved from a 2-kid trailer, to a trail-a-bike style WeeHoo, and now the HaD. We test rode an electric assisted long tail cargo bike after graduating from the WeeHoo, and really liked it. But in real world use we may not have been able to utilize it as often due to its weight (75 pounds!) and size (overall length,) which limited my ability to rack it on a car or bring on public transit.
. 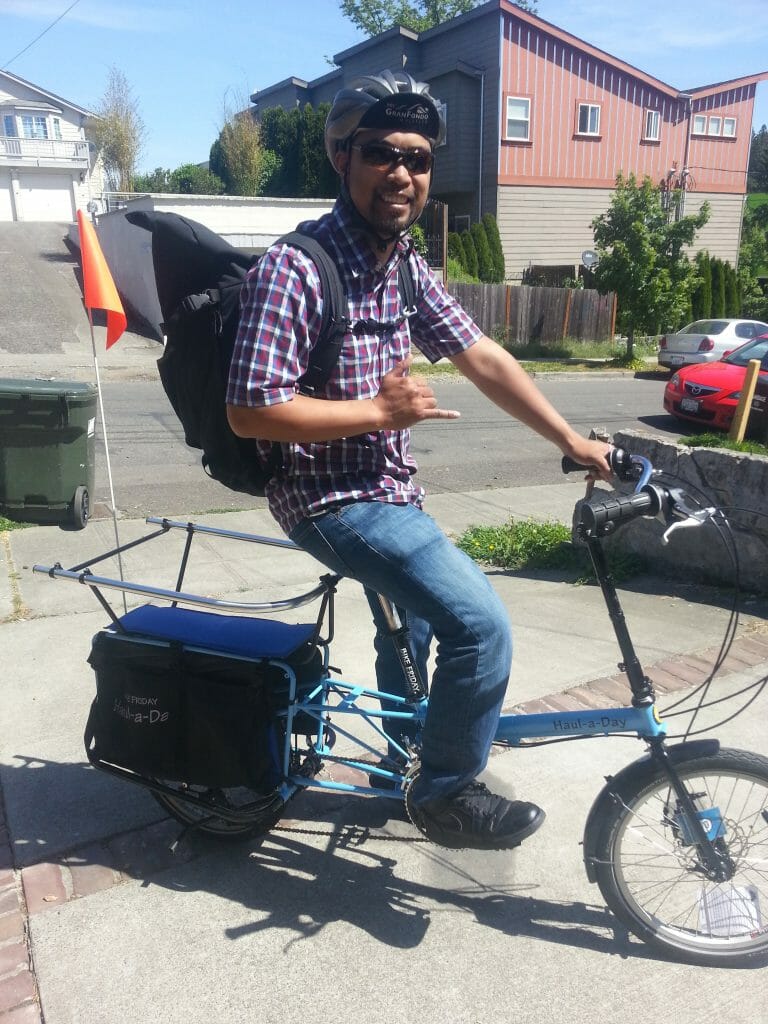 .
I narrowed down my options through lengthy online conversations with Madi Carlson, our local family biking superstar! She pointed me in the direction of mid-tail cargos, after picking my brain about my intended uses. I loved the idea of being able to load it on our Transit buses here in Seattle (Metro, Community Transit, and Sound Transit) … as well as onto bike rack on the back of my 1991 VW Vanagon, a family and cargo hauling adventure vehicle similar to the HaD!
. 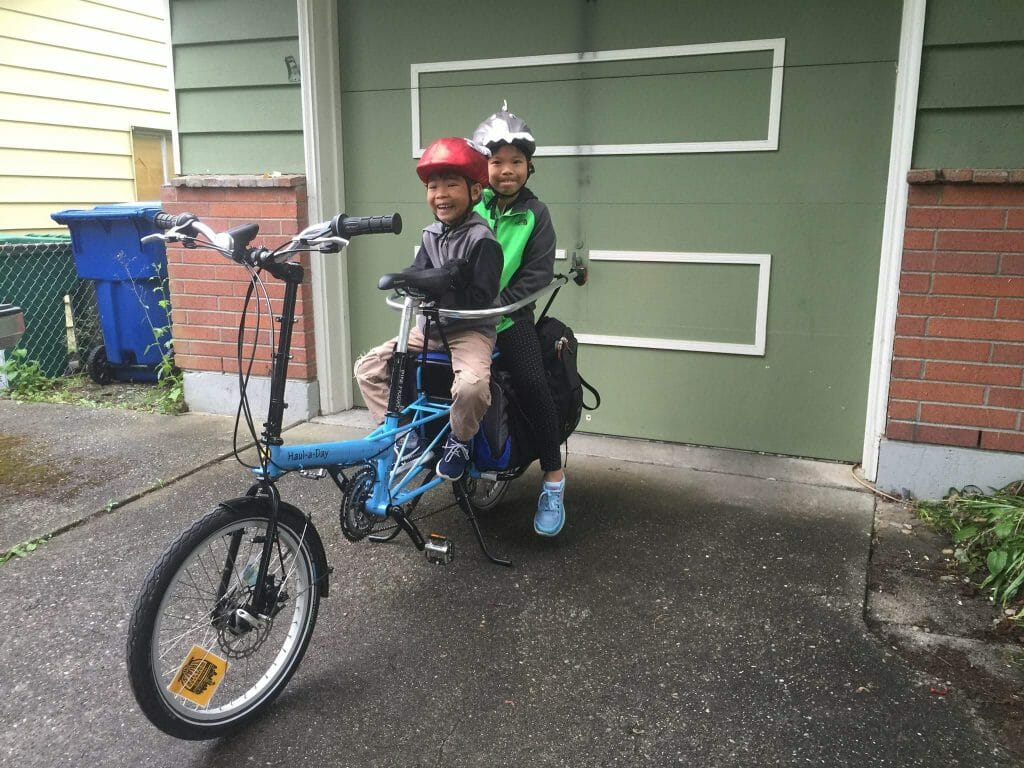 .
The biggest selling points were the size, weight, and ability for cargo (a mid-tail with long-tail capacity.) Being able to bring both kids to school on the rear deck, along with all our backpacks (school/work) is awesome! And then having the option of either locking it up at school and taking the bus downtown where I work and later retrieving it after work… or loading it onto the bike rack on the bus to bring downtown with me and then pedaling straight home or even taking the direct bus home, keeps my options open.
.
Fel, thanks so much for sharing your cool adventure with the Bike Friday Community! We gotta ask, will the Haul-a-Day make it out to Descend on Bend 2017?
.
Yes. Definitely. And it will come along on many other Vanagon adventures, campouts and road trips included.
.
.
To learn more about the Haul-a-Day, a size-adjustable cargo bike, follow the link!
.
.
.