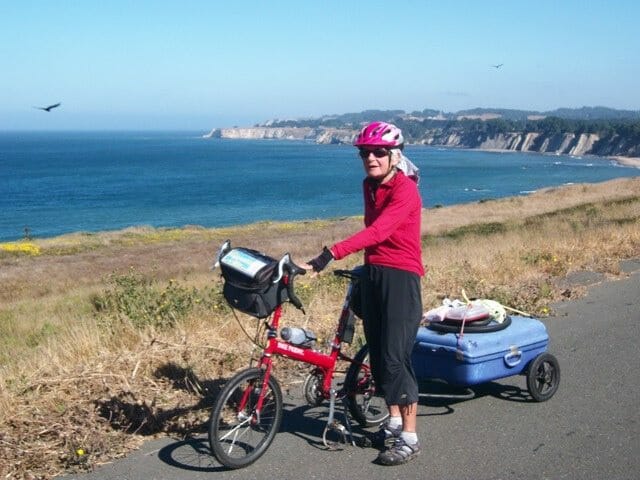 EDITOR’S NOTE: It has been nearly five years since Dolores McKeough sent us this email, reminding us that it’s never too late to chase your dreams!

What a fantastic, beautiful summer. The adventure, fun, stress, friends made, country seen, and on and on.

The trip started innocently enough with friend Cathy in Tampa on April 3. It ended yesterday after I biked from Malibu where I was camping with three companions, whom I met in Big Sur, to Santa Monica where I folded my Bike Friday into it’s suitcase (after I took the wheels off since it had been serving as my trailer).

So many good things happened on this extravaganza trip including the folding experience in Santa Monica. I didn’t want to disassemble the bike on the beach, although it was a beautiful day, there was too much sand.

So, I went to the REI store where Robbie, the bike repair manager, suggested I use part of his work space. What a generous offer. I took him up on it and had the trailer wheels and attachment off in no time. I then folded the bike (taking the accessories off is the most time consuming part of the process) and put it in the suitcase (the former trailer).

The suitcase with the bike weighed in at 52 pounds at the airport (even though it was two pounds over the allowance Suncountry let it go). My duffle bag with camping stuff, clothes etc weighed in at 28 pounds. And, I had two carry-ons.

So I figure the bike plus all my stuff was about 85 pounds. That’s a lot of weight to ride across the country and partly up and down two coasts. But, I did it and feel great.

I just added it up! I think I rode about 1,000+ miles from Mt. Dora, Florida, to Williamsburg, Virginia; then 4,500 TransAm miles from Richmond, Virginia, to Florence, Oregon; then 1,100 miles from Florence to Santa Monica California.

As you know it is not simply the miles that count but the terrain, the road surface, the elevation, the weather …

It was wonderful. The picture was taken North of San Francisco. Note the long sleeves; the weather did not warm up til Santa Barbara.