In 1991, Hanz Scholz, co-founder, and designer of Bike Friday, flew to Australia with the world’s first Bike Friday travel bicycle: a double ring, diamond frame New World Tourist. “I’d never packed the bike in a suitcase before this trip and I am happy to report it worked great.” (Otherwise, Bike Friday’s folding bicycles would probably still be on every cycle tourist’s wish list). He met a former girlfriend and took buses to cycle the desert regions of ‘Oz’, including Uluru, the Olgas, Darwin, Broome, Perth, Catherine and Alice Springs.

Was it hot? “Oh, about 130 degrees. We went through 4 gallons of water, overheated … I had to ride 18 miles in the pitch dark with my little Maglite, then nearly ran into a wild horse … all the light showed was some fur.” And the Bike Friday prototype? “Every time Janet got on a bus they wanted to charge her $10 for her mountain bike. They said, ‘yours can go free but she’s gotta pay for hers.'”

30 years later, the New World Tourist has evolved to be the benchmark in performance travel bicycles and is joined by a wide range of models covering the extremes of two-wheeled travel: packable tandems, recumbents, racing models, expedition models…

So where did it all begin? In the chilly plains of Fargo, North Dakota, USA, where Alan Scholz started cycling to get a Boy Scout merit badge. He got the badge, then bettered it when, at 16, he and three friends embarked on an epic 14-day, 1100-mile self-supported bike tour around his home state. From that experience, he was hooked. His parents Earl and Mary Esther recognized passion (remember when parents were like that?) and helped him start the Great Plains Bike Club which became the focal point in the region for touring and competitive cycling events.

At 17, the adolescent entrepreneur opened a Ski and Bike shop in the basement and garage of his parent’s house. He called it Al’s Bike Shop, then later changed the name to Dakota Nomad. Little 7-year-old brother Hanz, showing early mechanical genius, was kept busy by helping work on bikes and teasing the dog. Dad, Mom, sisters Erlanne and Mary Elan were closely involved, as was brother Ian (midway between Alan and Hanz)

The brothers started racing and became known as tough competitors to beat. They were also tough to beat in the sartorial stakes after Alan noticed that there was a shortage of good cycling clothes and touring bags. He dragged out a sewing machine and started Burley Bike Bags, so named after the nickname of Alan’s future wife Beverly. Beverly fell in love with Oregon after doing an Outward Bound course in Eugene, so love-struck Alan followed her there. 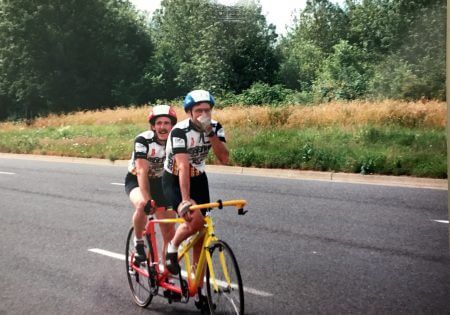 The pair fell right into the laid-back hippie life of Eugene, cycling 25 miles every Saturday from their home-made yurt in the woods to the Saturday Market to sell their bike bags and clothes. Burley Bike Bags soon burgeoned into Burley Design Co-operative, manufacturing quality rainwear, cycle touring bags, cross-country ski wear, tree planting bags, yurt covers, and the famous Burley Child Trailer. Alan designed the Burley Lite trailer for his first daughter, Hanna, and later improved it for Fraeda, so that he would be able to safely carry two precious kids and still be a cyclist. Burley Design Co-operative is now a successful brand in the bike industry, and the Burley Child Trailer is renowned worldwide as the benchmark by which other child trailers are measured.

Around this time, in 1985, Hanz Scholz did his landmark trip to Europe with a cheap (then state of the art) folding bike. He came back with a sore butt and a vow to invent a high-quality travel bike of his own. More on Hanz later.

Meanwhile, Alan and Beverly moved to Atlanta to explore new options, starting a custom commercial awning shop. Beverly and Alan parted ways and Hanz started working with his brother again in earnest. They returned to Oregon and started ATP (Advanced Training Products) making tandem framesets for Burley Design and bikes for other companies. Hanz, still with that bee in his bonnet and a sore butt, started experimenting with folding travel bike designs.

Burley became the largest tandem builder in the USA for a period, but ever anxious to do something totally innovative that they could call their own, Alan and Hanz launched into building performance travel bikes full time, encouraged by their friendly dentist (now Bike Friday owner and dentist extraordinaire, Richard Gabriel). 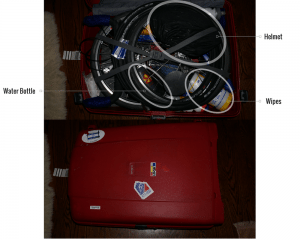 The company is now colloquially known as Bike Friday, after its signature product. The Bike Friday name, inspired by Man Friday of Robinson Crusoe fame, was suggested by early collaborator Paul Moore, a famous and innovative bike guy in his own right.

Running a small business is never plain sailing, even if you are making an exquisite product that is loved and admired the world over. Alan attributes the ability to ride out tough times to the personal nature of the way the company does business – forming a one-on-one relationship with each customer, the custom nature of the bikes, and intrepid nature of cycle tourists in general.

“We believe so strongly in matching a person to their very personal machine– their bike–that our whole organization runs backward from most manufacturing. Our design process starts at the customer instead of ending with the customer simply buying the results”. Thus, the company can make a bike exactly suited to the rider.

Alan and Hanz are passionate about “being personal”.

“The mass production orientation in our culture tends to make us see anything outside the 20th and 80th morphological percentiles as non-normal. (Morphology: the study of form and structure of plants and animals, and of course human morphology.) We are convinced that everyone interested in cycling and doing it well is “normal” to us. As an engineer, I know the materials don’t care what size and shape they are made into. Size and shape of the user are not restrictions when approached correctly.”

“We have a unique product, but because we are a very small but international custom builder we cannot afford a big glossy ad budget or conventional placement in stores everywhere. We can only succeed if our customers love their Bike Friday bikes, and tell anyone willing to listen. We have grown by referral.”

There is also the hurdle of making a product that is “different”.

“Conventional marketing tells us that if we wanted to make a bicycle that goes in a suitcase and also make money, we should use bigger wheels, for no other reason than to stay squarely in the comfort zone of the mass-market mindset. It is always risky to go against the flow, but there’s putting your financial safety first, and there’s doing it right.”

Bike Friday has always extended its vision beyond merely selling bikes. The company sees cycling as a way of life, and a way to create a better planet. Back in 1995 Bike Friday built the  Family Tandem, the affordable, kid-friendly travel tandem that got big and little riders pedaling in unison all over the world. This bike initiated many programs for disabled children, including the Adapted Physical Education Project at Wayland Public School, MA., and the Tandem program at the L.A. Braille Institute.

So what is in store for the future?

Alan says, “We’re going to continue to unveil ground-breaking models like Sport Utility Bikes, like the Haul-A-Day and E-Bikes that may be firsts in the cycling world with what they can do and what they will allow you to accomplish. They won’t be just another Bike Friday travel bicycle– though that’s always welcome news to our customers. Our goal is always to make travel easier for cyclists and make the hardware needed to make cycling and travel easier and more available to everyone and every type of cyclist”.