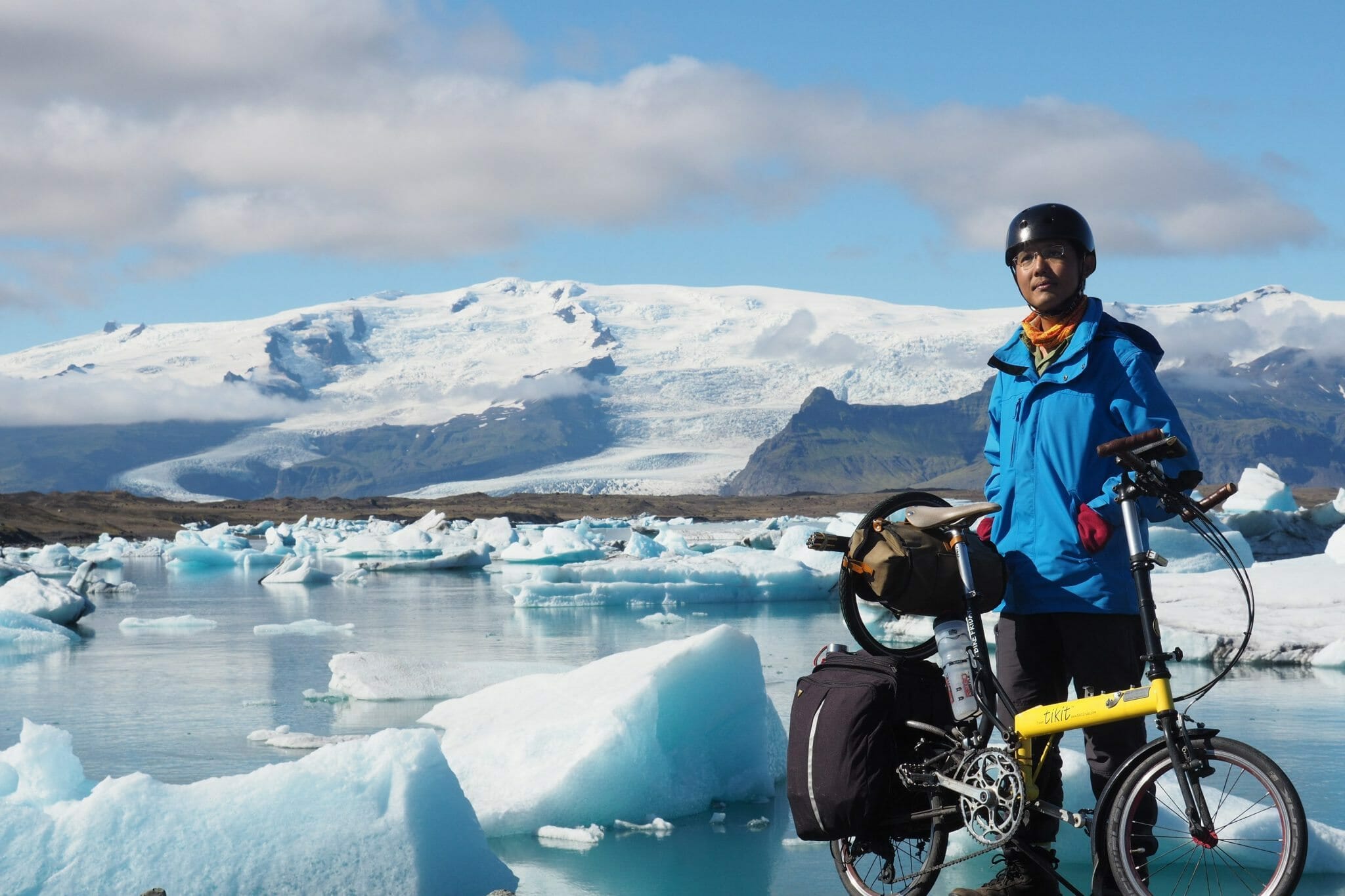 .
.
Back in 2009 I was on a bus ride towards Vatnajokull doing a video project. I noticed Bike tourers along the way and they were all loaded with panniers. I was thinking how nice it would be to tour Iceland on a bicycle. Fast forward to 2016, I finally took the step to fly from my homeland, Singapore, all the way to Iceland to do what I have been dreaming of, Iceland on 2 wheels! Best of all, on a foldable bike which I can pack in a standard suitcase, the Bike Friday Tikit. I have personally done some solo bike touring before like Seoul to Busan, Taiwan Round Island and some parts of Japan. Iceland will be my longest and toughest expedition. I decided to try and keep my load light, but still managing to squeeze a camping tent into my saddle bag.
.
. 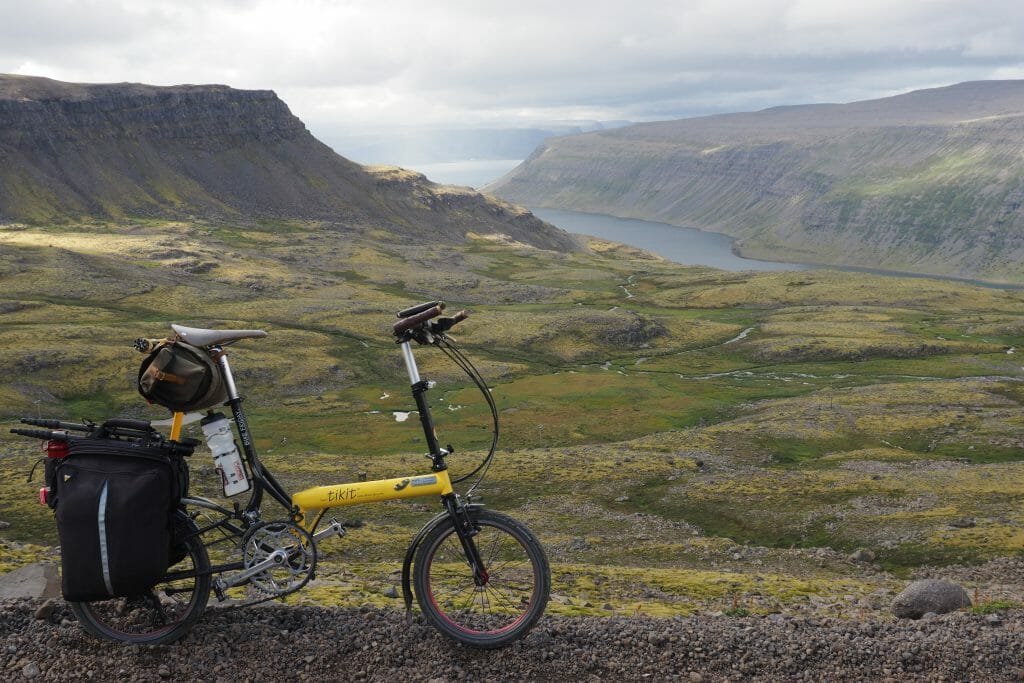 .
.
The plan was to start riding from the airport and cycle clockwise direction around Ring Road Route 1, with a detour to Snaefellsnes Peninsula & the NorthWestern Fjords. Several blogs have warned about the harsh weather conditions in Iceland, even during summer, and how true it was. It’s a trip filled with harsh arctic winds, head winds, cross winds, Rain, pretty cold for a summer trip with temperatures ranging from 6-16 degrees. What I didn’t quite expect is to navigate aprox 8-12% gradient slopes on gravel routes especially in the northwestern fjords of Iceland. This proved to be a bit of a challenge for small 16inch wheels. Thankfully I mounted touring tyres on it and while the ride can be pretty harsh on gravel roads, not a single tyre puncture happened!
.
. 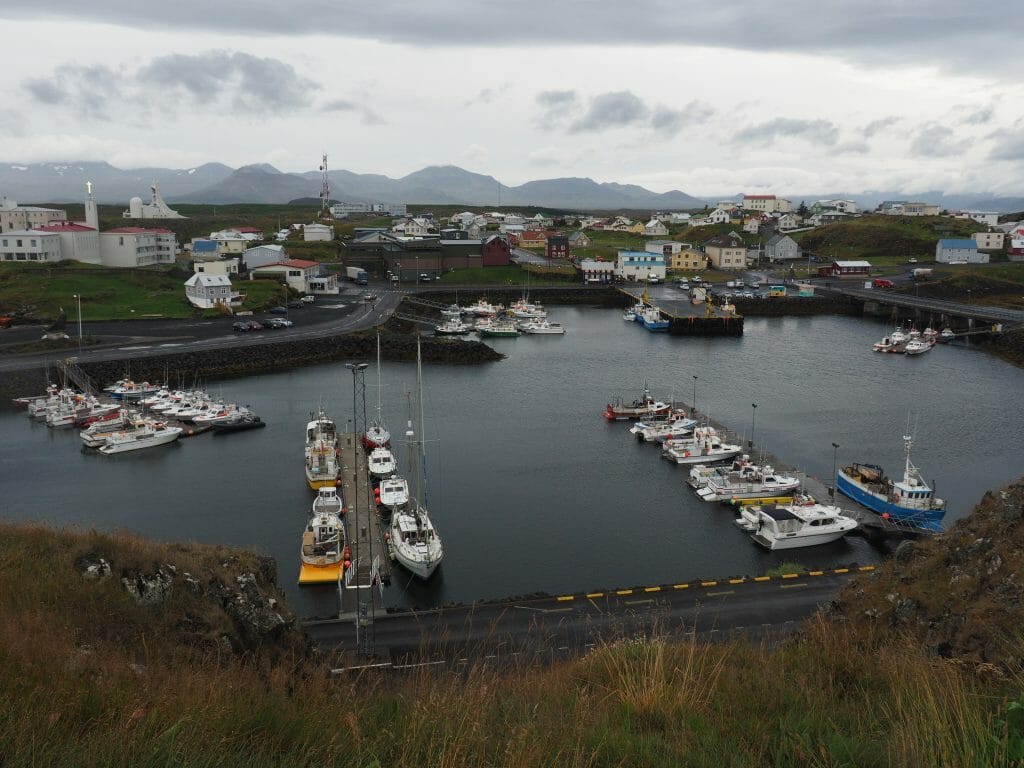 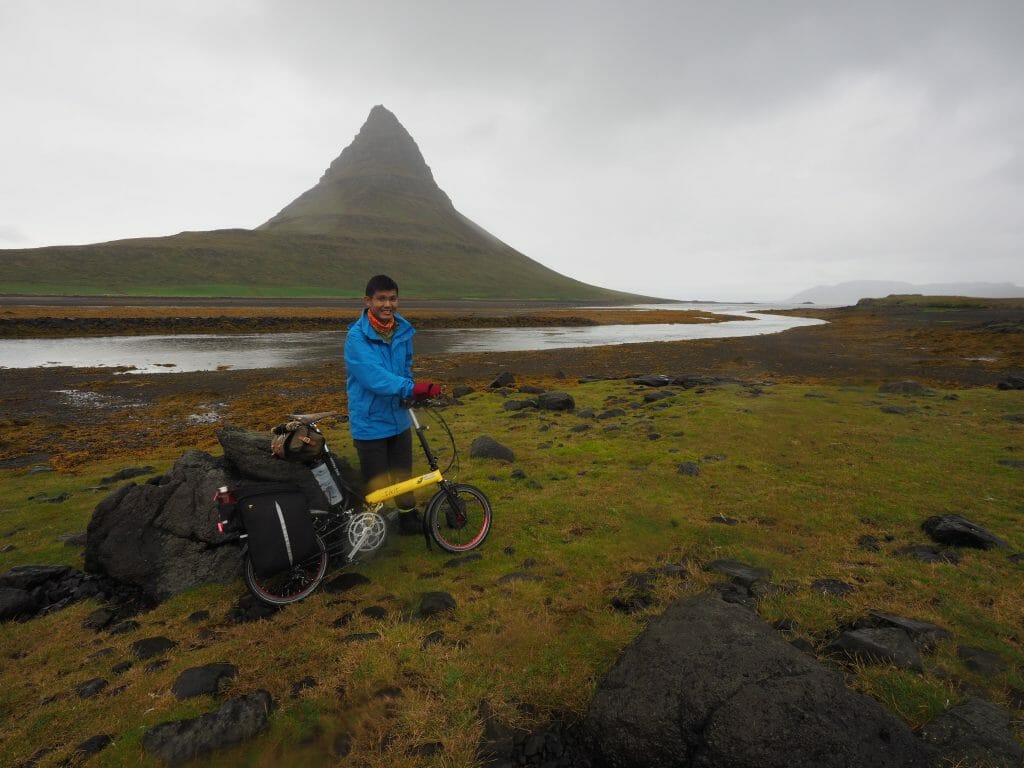 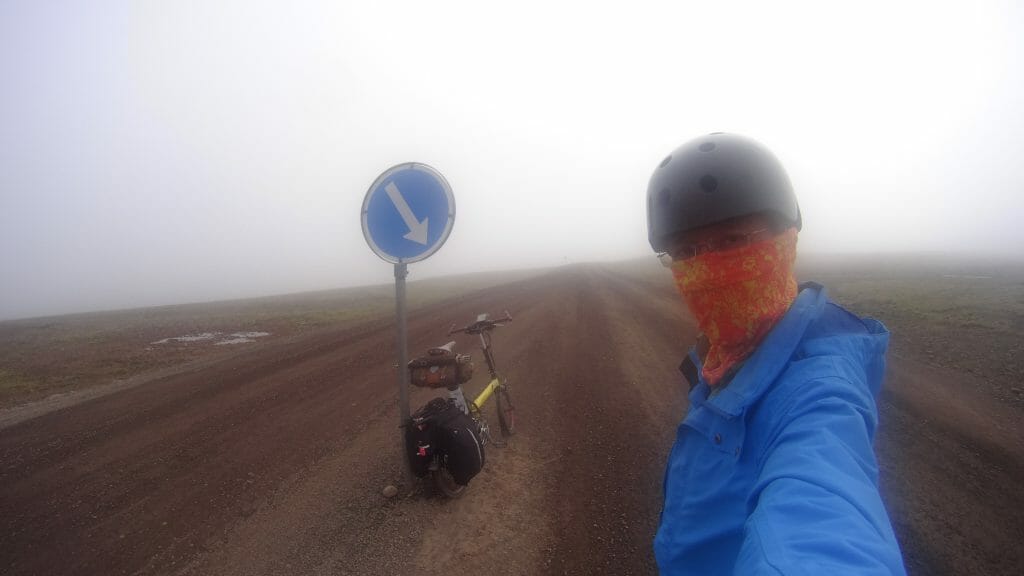 .
.
Despite the harsh weather, Iceland is a beautiful country to cycle. So much Nature surrounds you. The landscapes seem so surreal ranging from volcanic landscapes , fjords that look so majestic, and of course massive glaciers that take your breath away! Best part is there are times where there isn’t much vehicles and it’s only me and mother nature. It’s heartwarming to meet and chat with fellow tourers, sometimes while riding or at campsites. Most tourers will look at my Tikit in disbelief, that I actually cycled 100km average per day on those small wheels and minimal luggage.
.
. 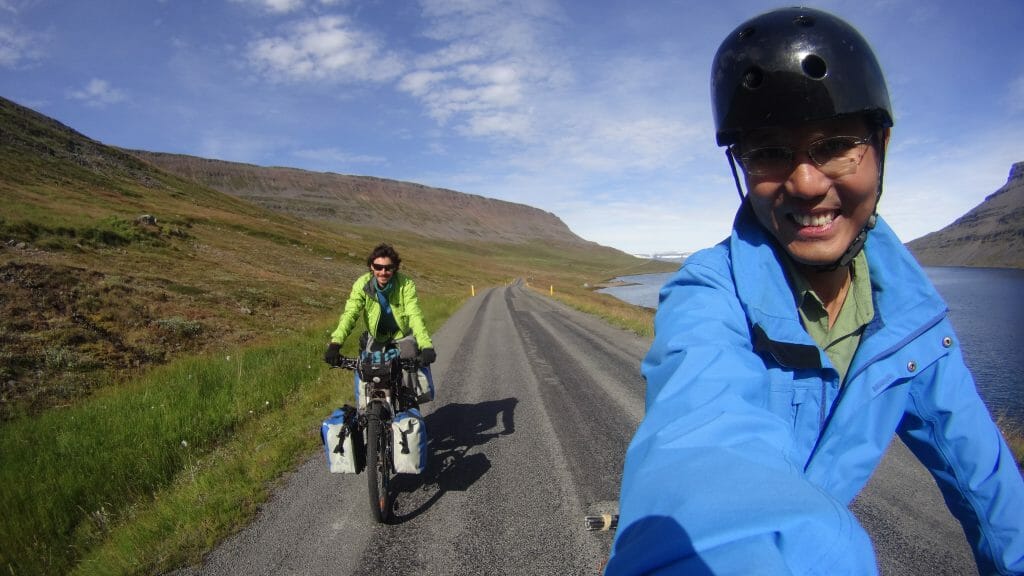 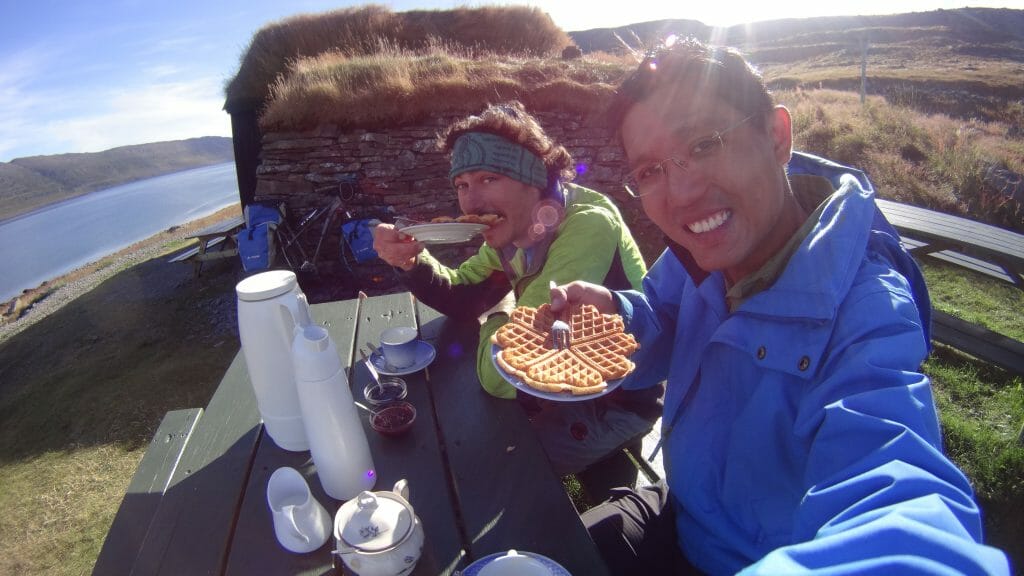 .
.
The entire journey’s lodging was mostly at designated campsites and the occasional guesthouse/hotels to pamper myself. Some news of a potential earthquake that hit the area of Vik prompted me to cut short my trip so i just folded the Tikit and boarded the bus to the main city. A total of 2000km was clocked, almost nearing to a complete tour of Iceland. I am in awe of the beautiful nature that Iceland has to offer, and touring Iceland on a bicycle really makes you feel the landscapes better as opposed to driving. Thank God I managed to survive the trip with no injuries and a 16inch foldable bike ,The Tikit, that stood up to the test of surviving 2000km on this trip.
.
. 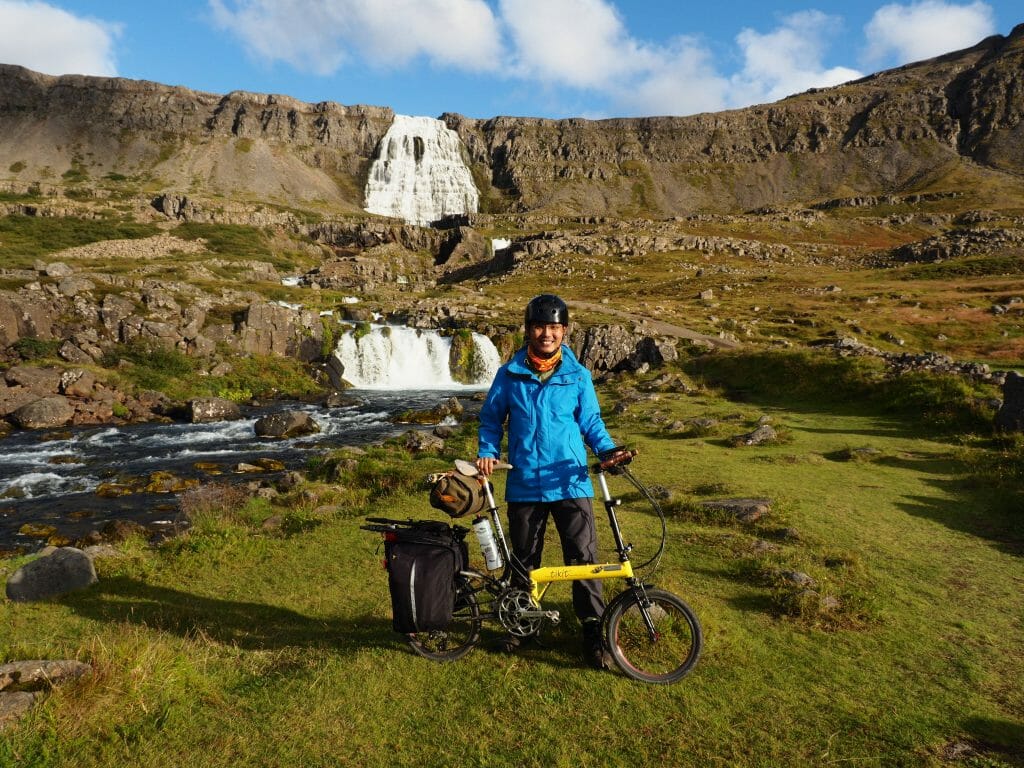 .
.
Aaron- Thank you so much for sharing your great adventure with the Bike Friday Community!
.
Do you have a journey you’d like to see featured on Bike Friday’s Blog? Contact [email protected] to have your story considered for publishing!
.

Want to see more of Aaron’s award winning photography? Be sure to visit his website: http://aaronwende.wix.com/photography#!

Editor’s Note: Whereas intrepid cyclists like Aaron Lim prove that you can tour on 16″ wheels, we don’t recommend it. We’d advise anyone who wants to tour these kinds of harsh environs to use a Pocket Llama or a New World Tourist.

6 thoughts on “Touring Iceland by Bike”