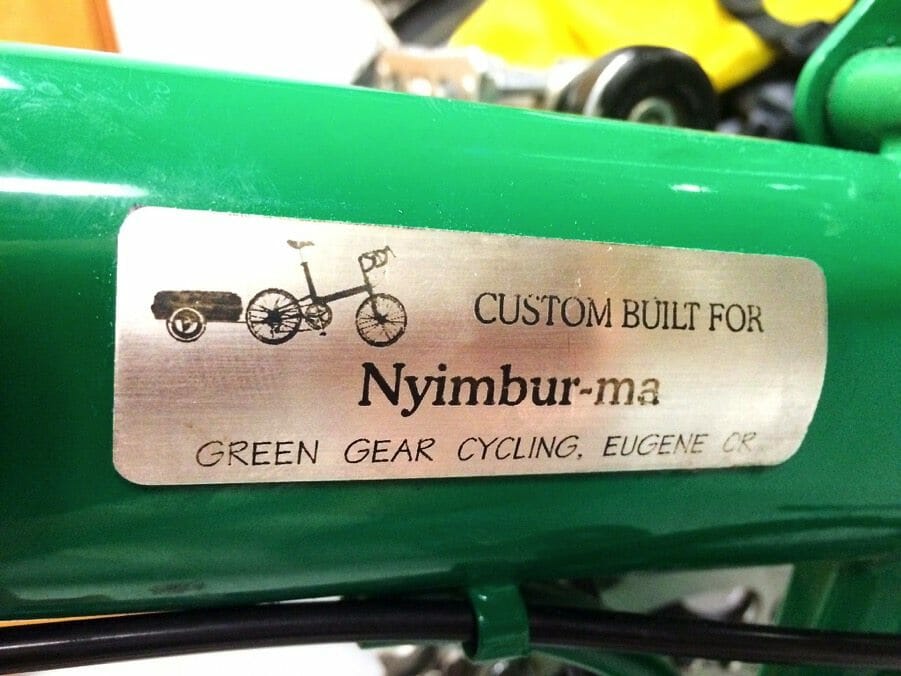 My trusty Bike Friday Pocket Llama has a funny name – Nyimbur-ma. That means ‘peace’ in the oldest of Australia’s ancient aboriginal languages. Nym has a cousin, Bo, my wife’s Bike Friday Expedition model. Nym and Bo and their happy peddlers have had good times together: three summers in in Eastern China, a winter in Thailand, and scampering about the USA as Bike Fridays often do. Together, Nym and Bo, my wife and I, found much joy. So when the doctors told us nothing could be done, that my wife’s cancer was beyond today’s medicine, she and I made a pact. When the end came, when her spirit was free, I promised I would take her on one more walkabout, one more Bike Friday trip out to see the world. And so it was.

Without much of a plan, Nym and I and my wife’s gentle spirit flew to London mid-May, then caught a ride with a delivery van to the great eastern city of Lincoln with its splendid hill-top castle and magnificent cathedral. We settled in to explore. 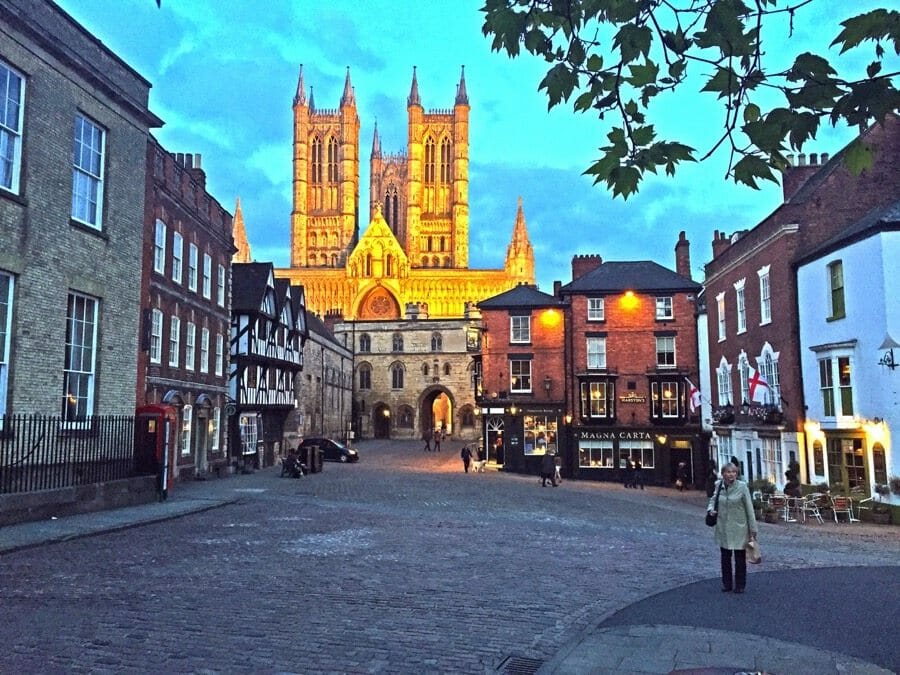 Lincoln Cathedral, consecrated in 1092. Magna Carta, that 1215 ‘great charter of liberties’ was first read out in Lincoln in this plaza and is archived in a special vault in the facing castle.

‘Virtual Reality’? We speak of ‘virtual reality’ as some sort modern of transcendence for the senses made possible by the latest technology in goggles and ear phones and joy sticks. But perhaps this is not all new. Imagine how the 11th Century peasant might feel, having labored afoot up Lincoln’s Steep Street from his dirt-floored, mud-and-wattle, thatched-roof hovel, to stand in the soaring shadow of great cathedral’s fifty story tall spire, and inside, bathed in the light of glinting gilt and stained glass, hear learned men in resplendent robes deliver their God’s message from high pulpits in incomprehensible Latin, awash in the thunder and trill of the great 1,000+ pipe organ, surrounded by timeless, elegantly proportioned stone arches and pillars reaching heavenward. Virtual reality of another sort? 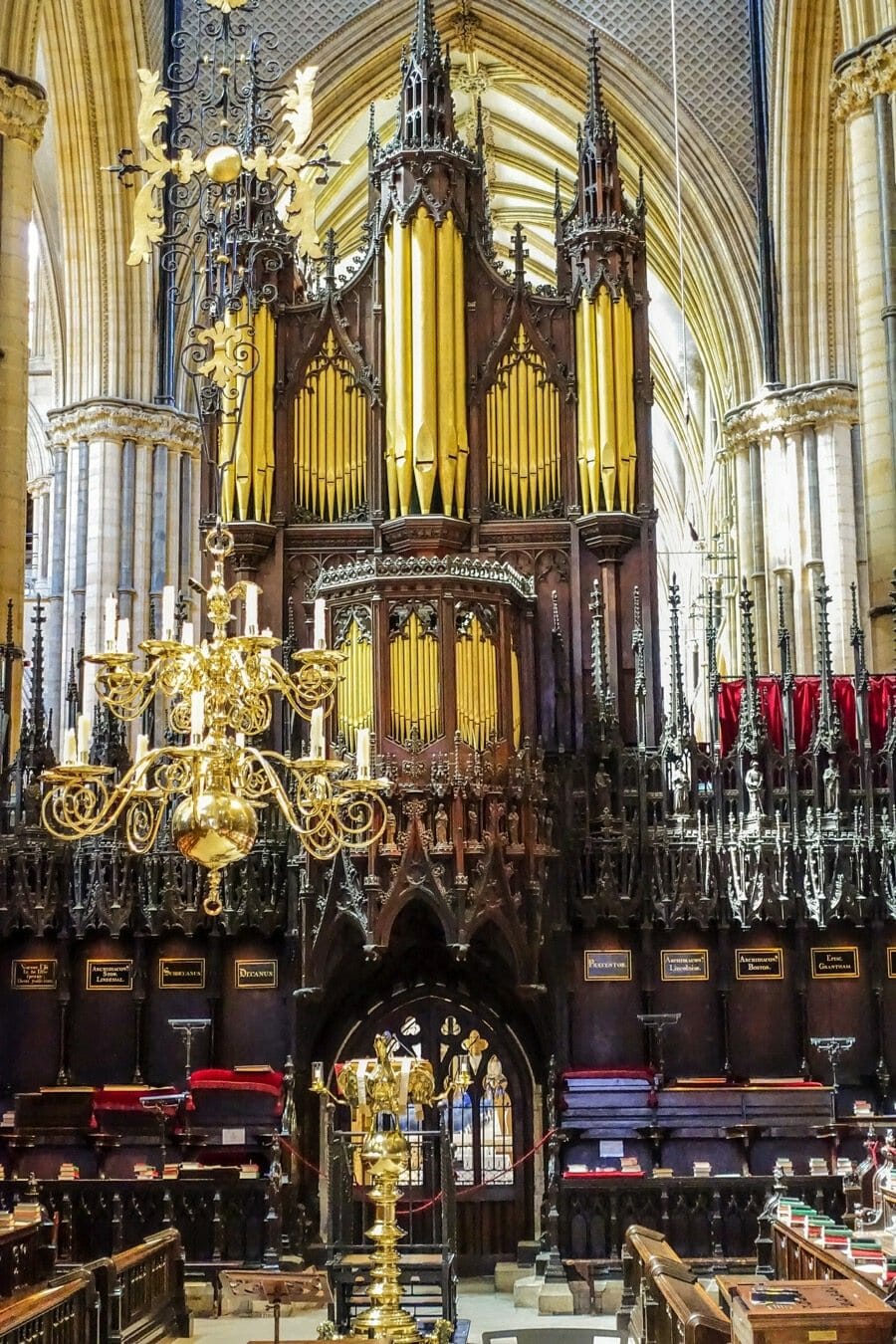 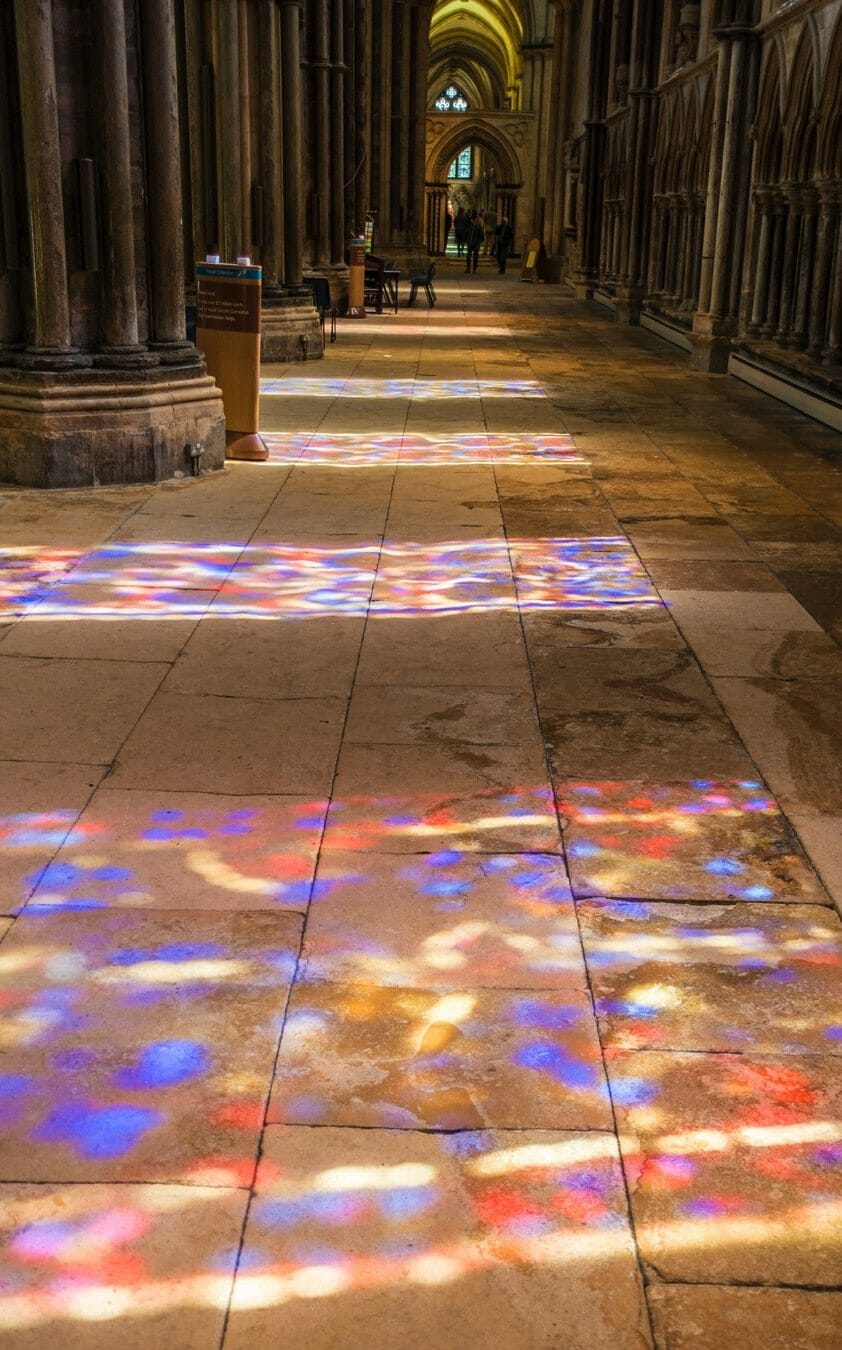 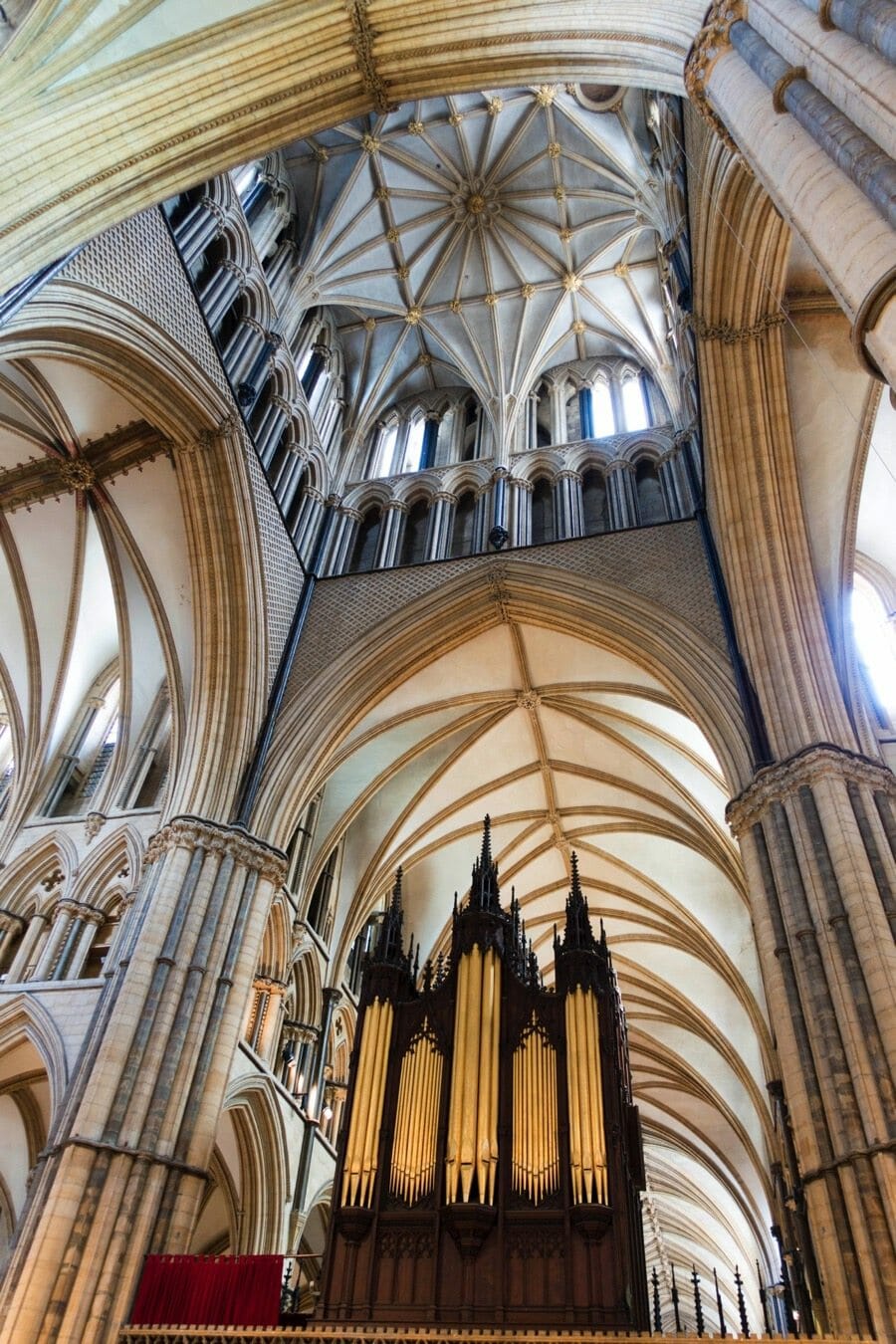 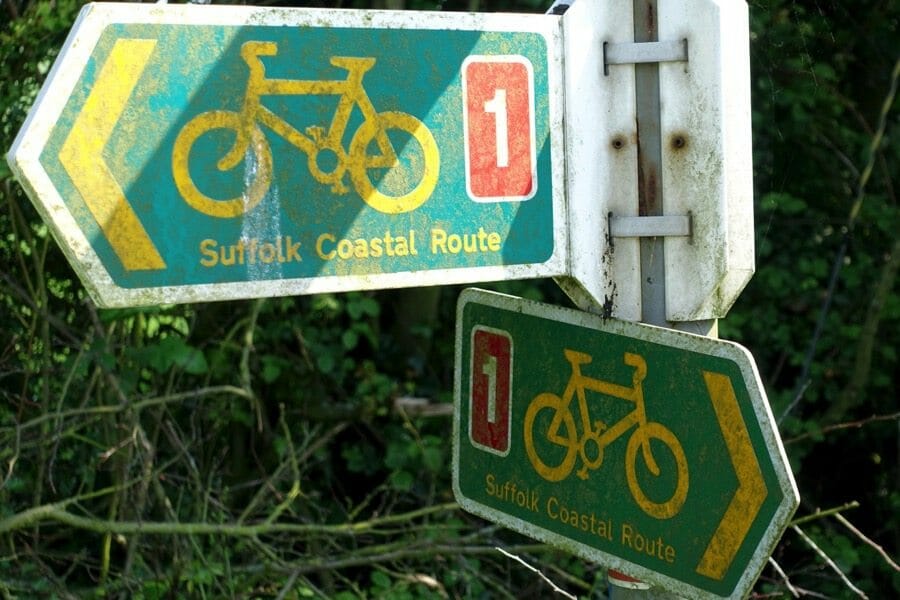 This is a bike-friendly land. The National Cycle Network (NCN) stretches 14,000+ miles throughout the United Kingdom along abandoned rail lines, minor roads, canal towpaths, and pedestrian walks. Created to encourage cycle touring by the charity Sustrans with a $60+ million National Lottery grant, the NCN attracts more than 230 million trips a year. UCN Route 1 spans the country from Dover to Shetland. Nym and we joined the route at Lincoln and headed southeast through Norwich toward the cross-channel port of Harwich. 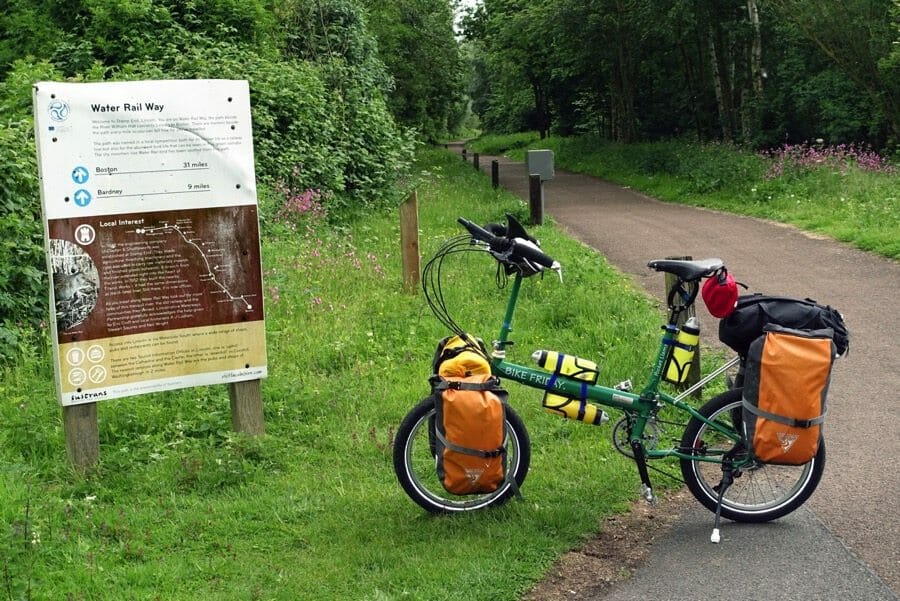 The Iron-age watercourse, the Witham river/canal, connects Lincoln to the inland port of Boston, and provides cyclists a well groomed parallel towpath most of the way. – with occasional surprises.

On a short break I turn away for just a moment, when suddenly, the sound of a squealing Bike Friday in distress.  This fearsome ancient beast had crawled from the canal was trying eat my Llama! 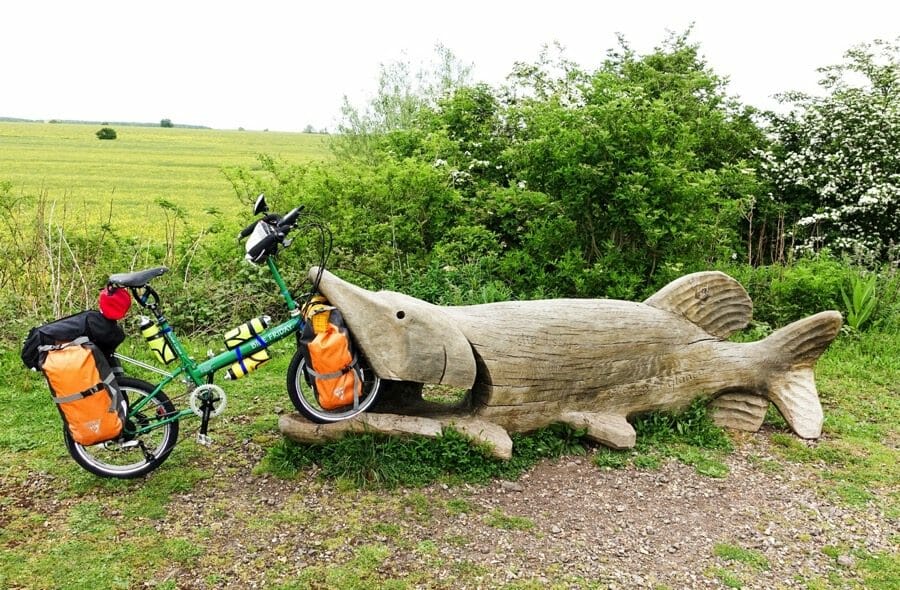 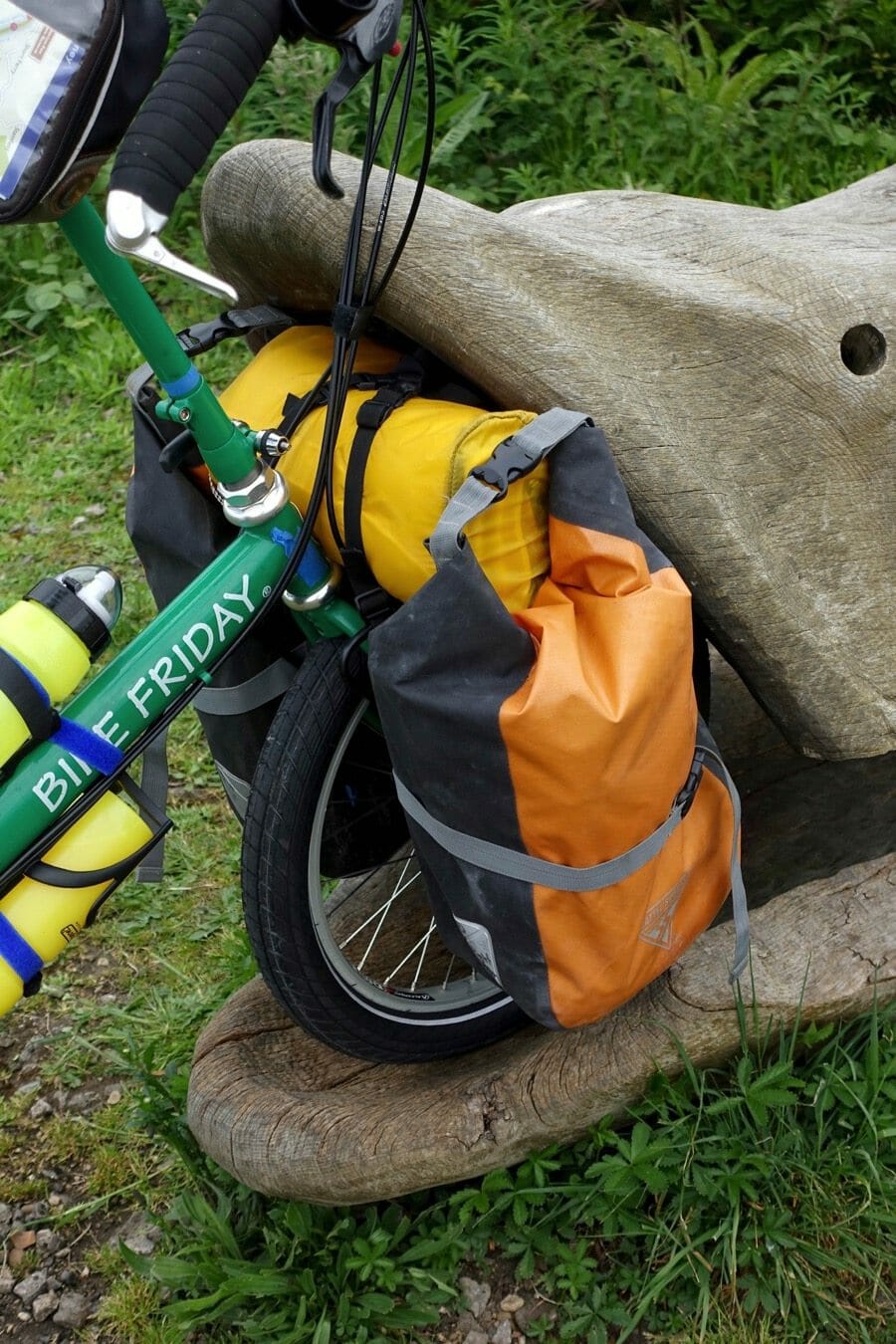 Farther along, other creatures appeared beside the path.  It is from these sheep that perhaps the first ‘steel wool’ was obtained. 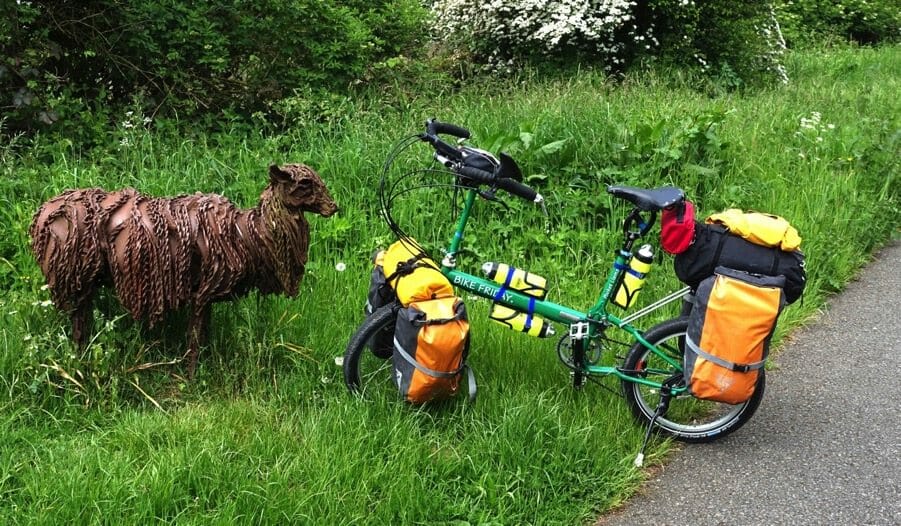 Nym also made friends with these very slow moving cows. 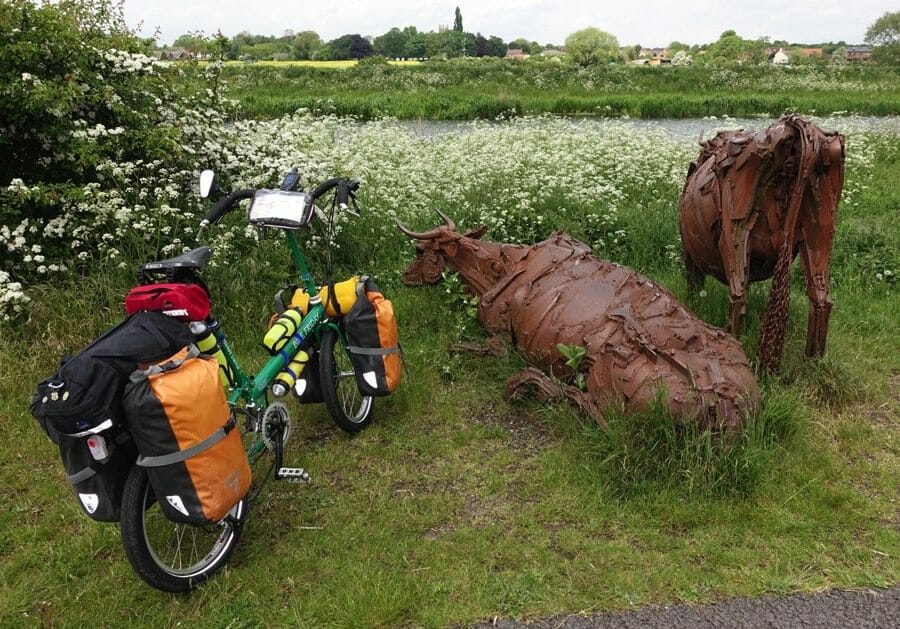 Silliness aside, this is land sodden with history. Sunday afternoon, I sit in the courtyard of old St. Botolph’s church, Boston England, spiritual home of that handful of Rev. John Cotton’s adventuresome parishioners who left for America in 1630 to establish their “city on the hill,” a land to be free from religious oppression, New Boston.  A brisk north breeze blows and with it comes the sound of resistance against another opression, Nazism. Low over the church tower flys a V-12 Rolls Royce Merlin engined, immaculately restored, 70 year old Spitfire fighter plane – the linchpin to the Battle of Britain.   I stare and wonder; how else history might have gone.  Without those pilgrims?  Without those Spitfires? 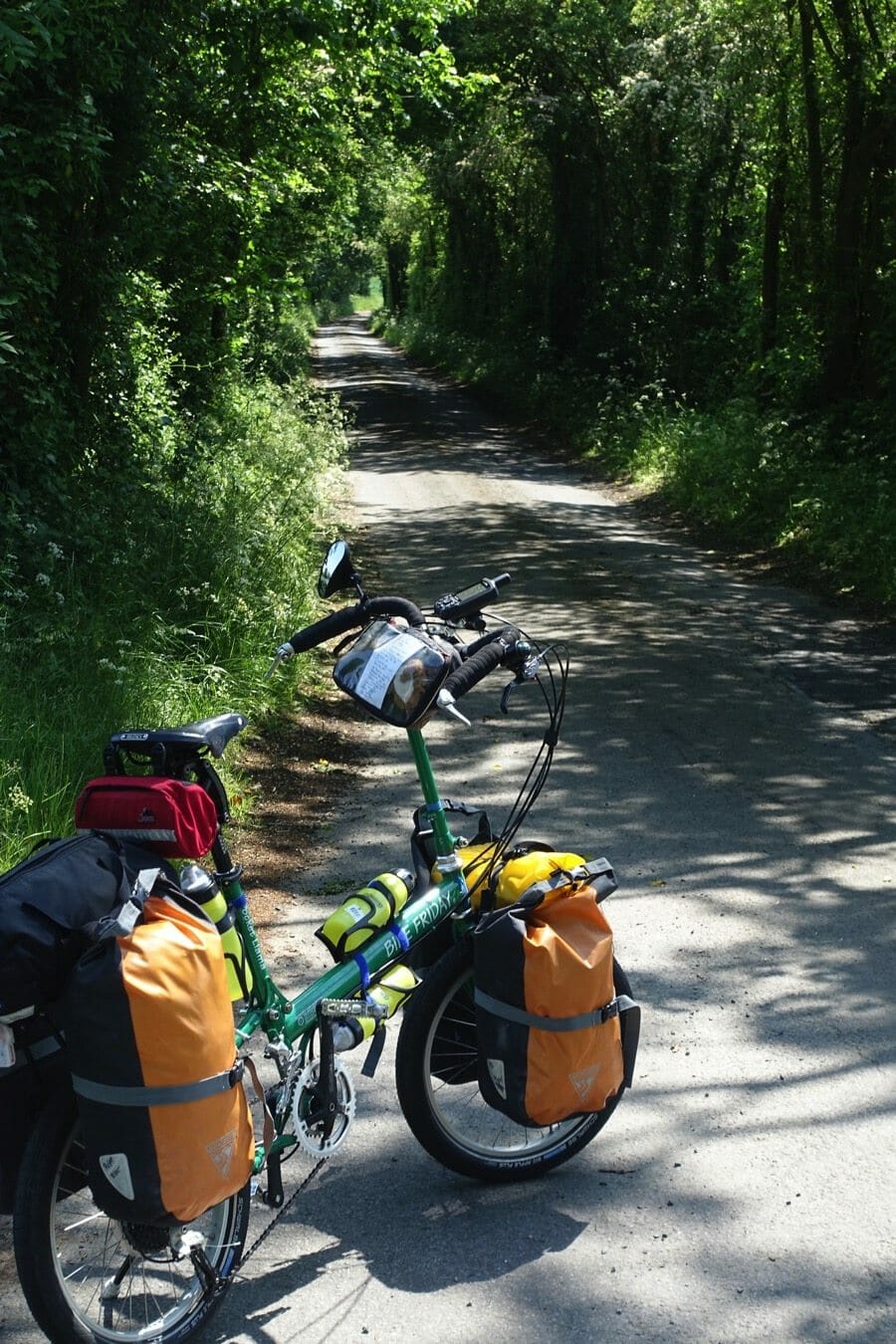 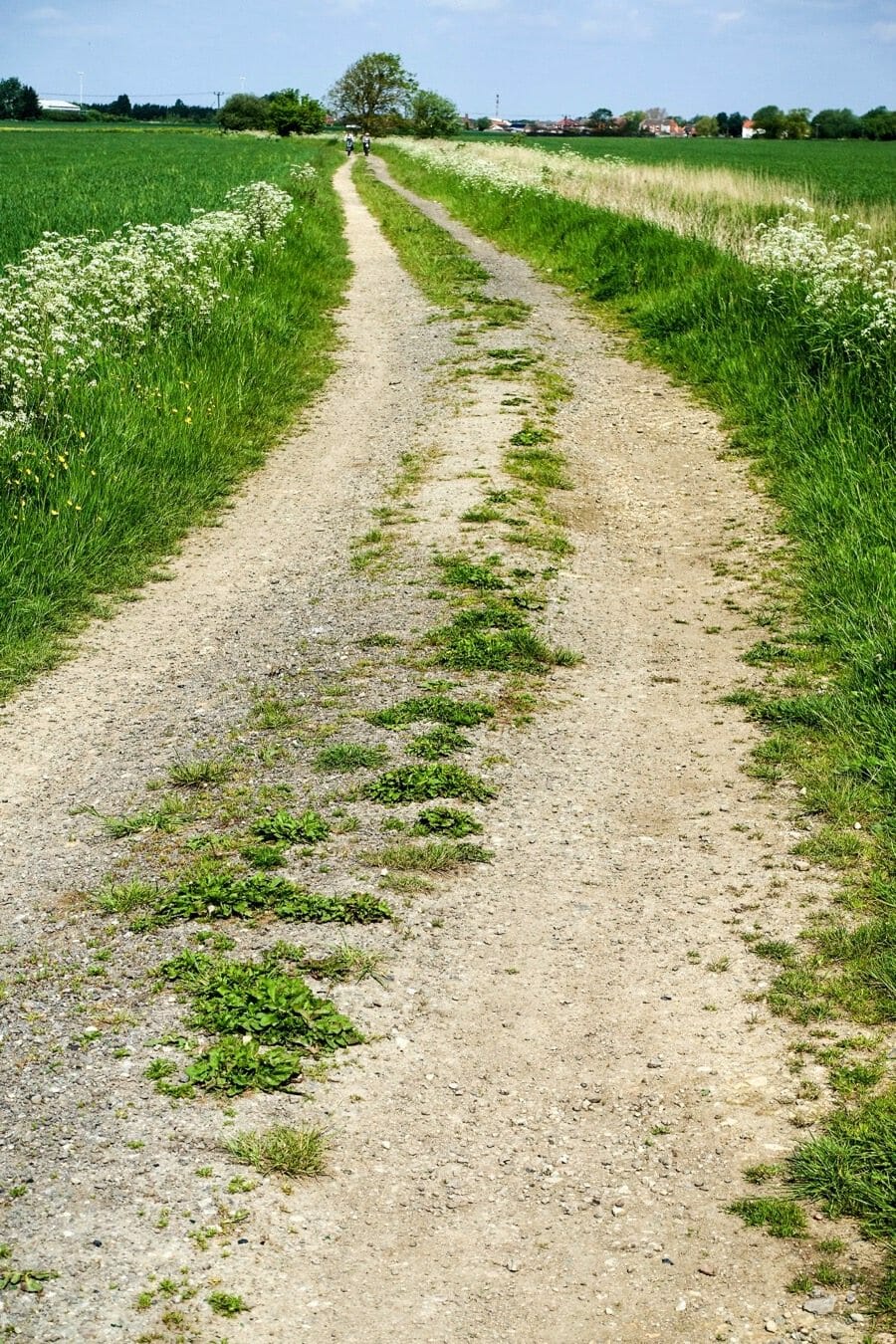 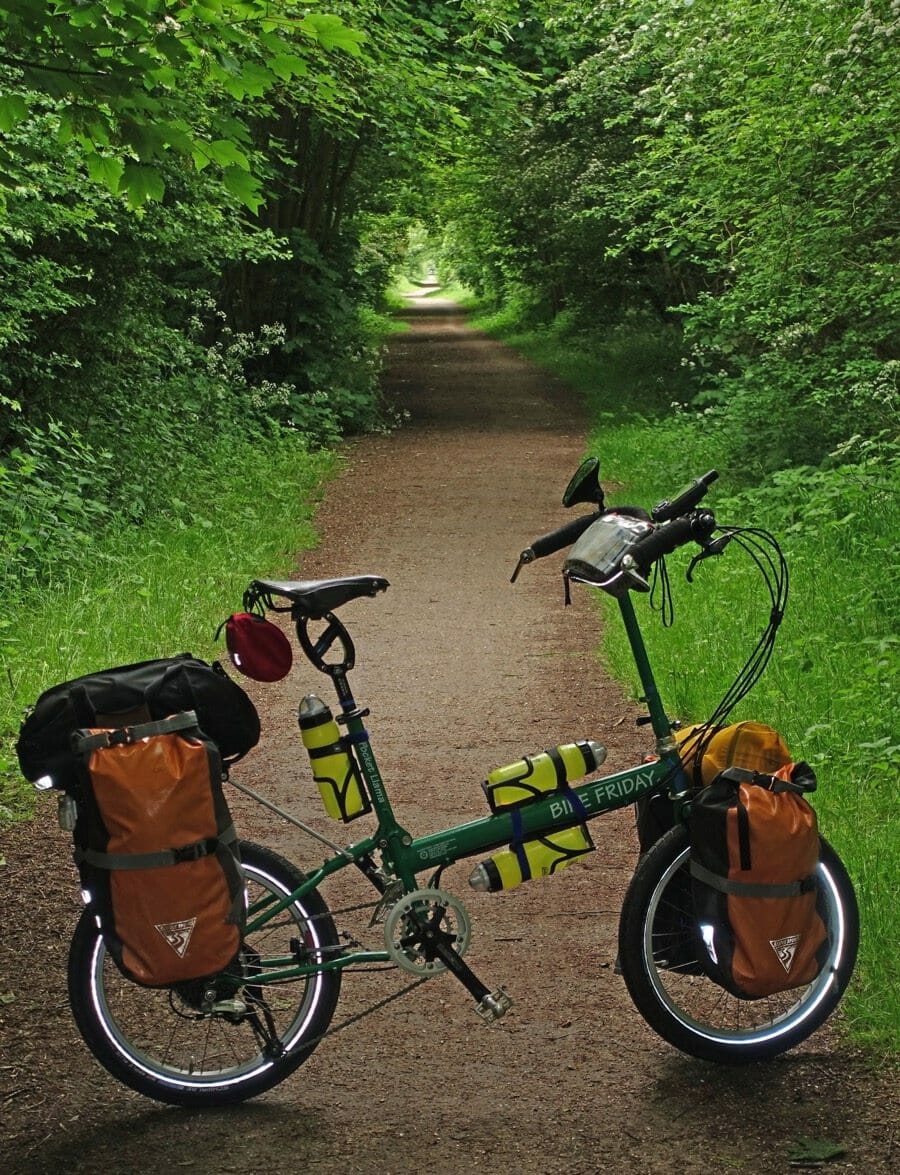 Memorial Day takes on different meaning in southeast England. For here the fields of Flanders are not far away.

“In Flanders fields the poppies blow

Between the crosses, row on row,

That mark our place; and in the sky

Scarce heard amid the guns below.”

The history takes getting used to. In the hamlet of Earl Soham my B&B was built inn 1530. The doorways are 5’4″ tall and have little bangles to remind everyone to duck. Original foundation; hand hewn oak beams.

Norwich is home to the arts seemingly everywhere. Just opposite the 900+ year old cathedral Alice and the Wonderland crew, opera singers, and local dancers, gambol before the spectacular Forum community center. There’s Shakespeare in the pews and rock-‘n-roll in the square, an at-risk youth facility and grand new library all together – a joyous celebration of urban vitality. 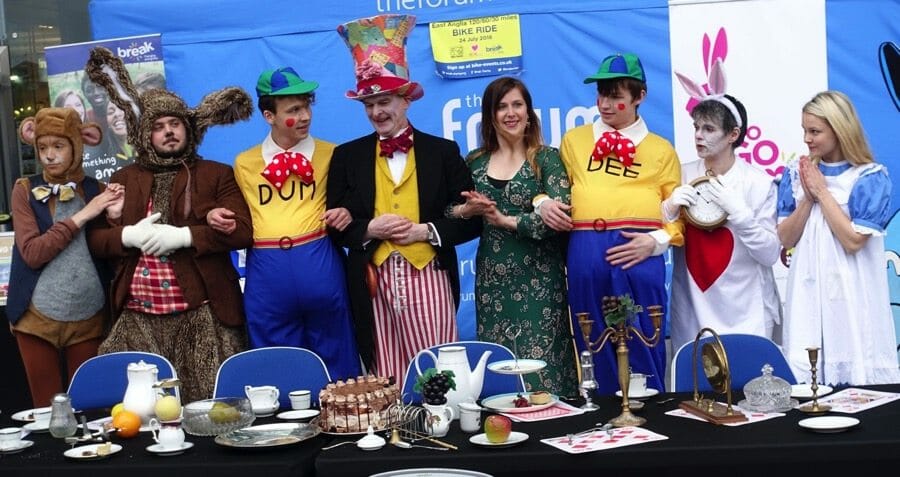 Some delights appear without fanfare, like 12th Framlingham Castle, not visible from the popular market town of that same name but offering modest greetings to cyclists approaching by the northern road. 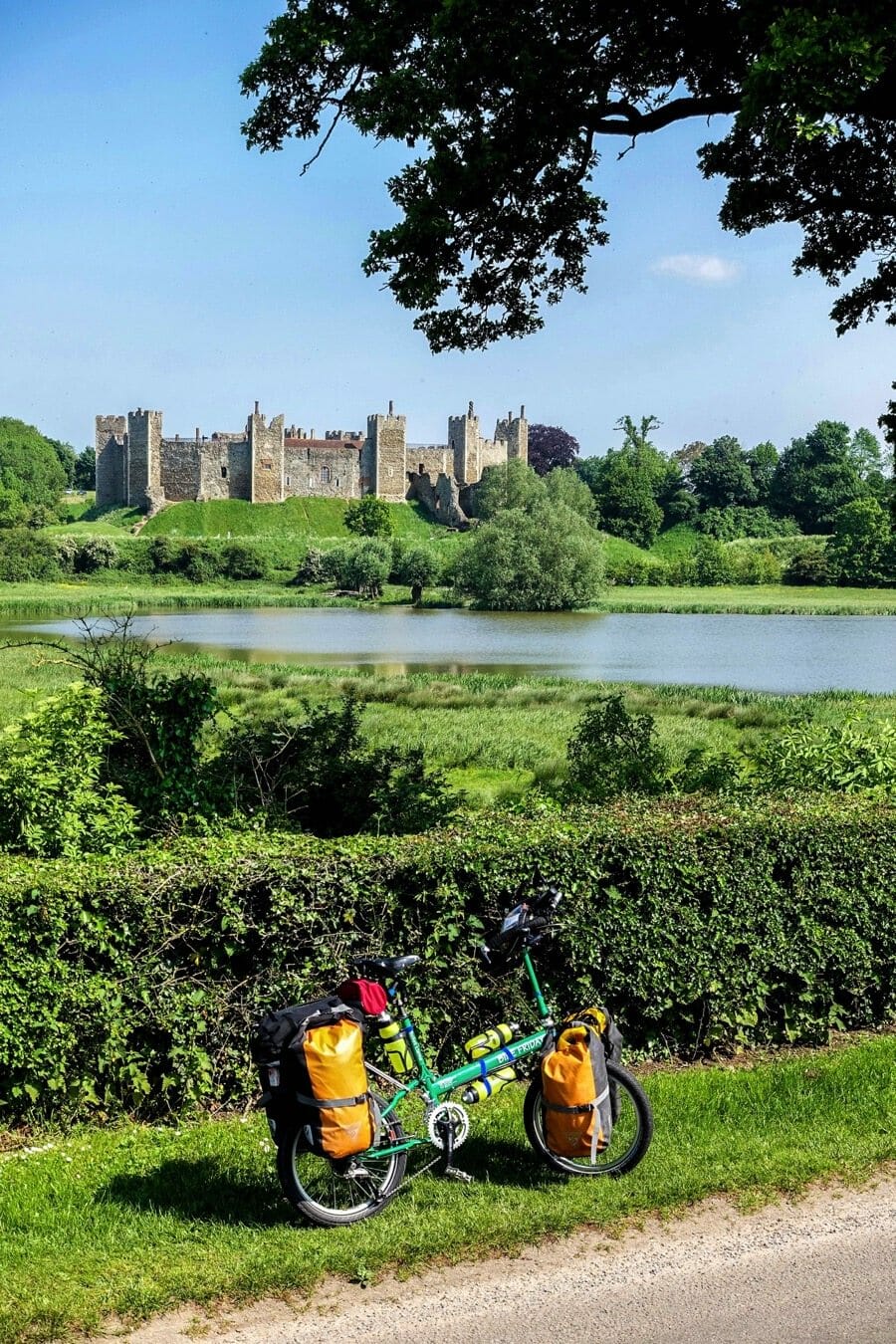 The sheltered pathways, interspersed with open, gently rolling fields, went on and on until it was time to go home. 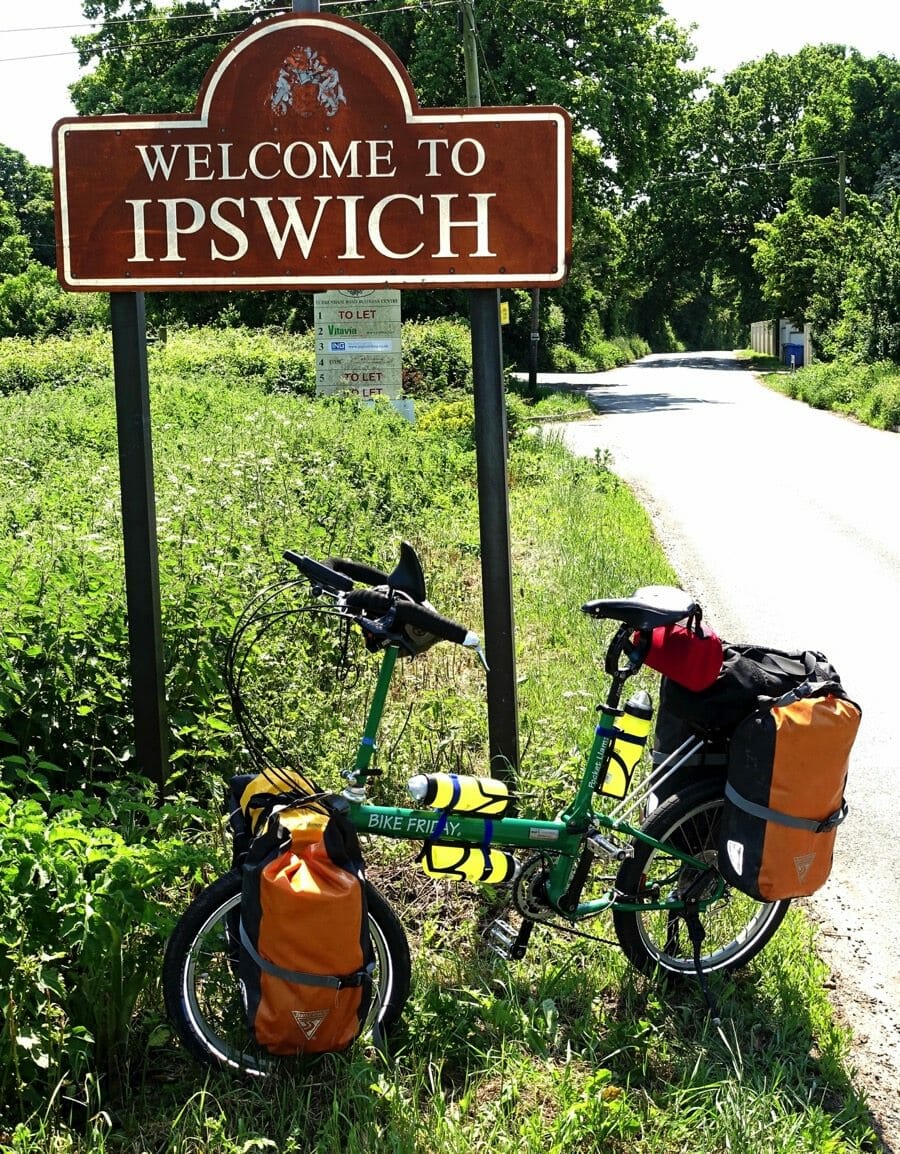 OK, “Ipswich or bust!” doesn’t have the ring of great daring-do but it was the end of the line for this trip, a first for our family, a fascinating town with a waterfront still centered on the dock from which the pilgrims departed in 1606 to establish the Jamestown Colony in Virginia.

Coda. Our trusty Bike Fridays accompany us on many journeys, bear many burdens. They are little critters, to some, odd looking, yet for those who know them, good companions – sturdy, comfortable, smooth to ride, and easy to store. Thanks Bike Friday for helping us on our way. 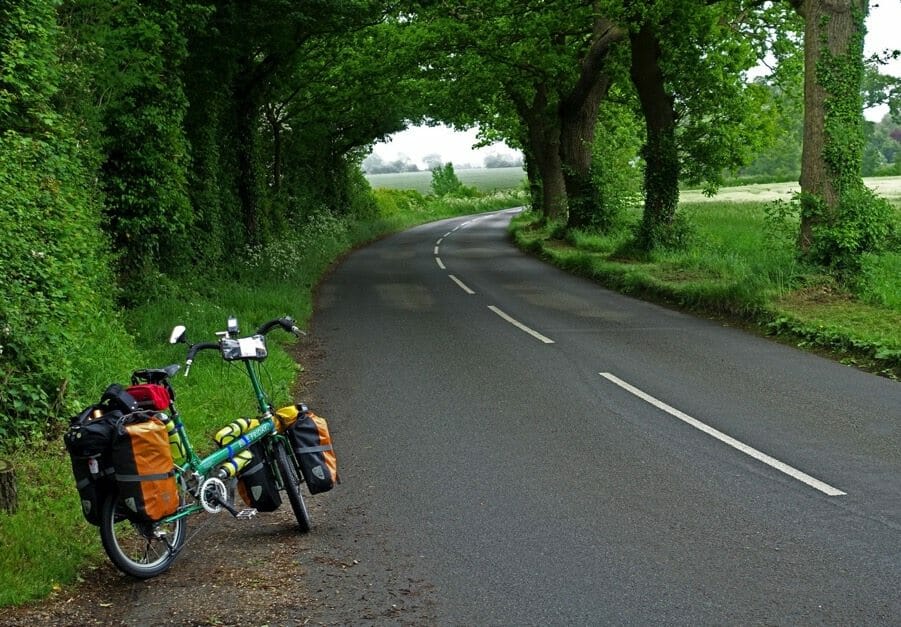 Navigation. Travelers have options: used copies of the 1997 Sustrans maps, Google Maps, Garmin, and local advice. I tried them all. I expected locals to confuse and Google Maps to excel, and for finding local attractions the likes of pubs or laundromats, both did. But for point-to-point routing, a Garmin GPS MAP 64ST, loaded with the detailed Garmin GB Discoverer™ 1:50k – Full Coverage Map was the best. Note this is NOT the City Navigator NT data set but a much more detailed rendition based on the 1:50K Ordnance Survey maps. The GPS was setup for ‘cycle touring,’ and to ‘avoid’ ‘steep ascents,’ ‘ highways,’ and ‘single trails’.

Thank you so much Rich for sharing this powerful story with us all. What a beautiful way to honor your wife’s spirit.

To learn more about the bike that Rich used for this special journey, click here: Pocket Llama

28 thoughts on “The Spirit Ride”