Long time Bike Friday owner Sally C. stays nimble, and keeps up with her granddaughter on her new pakiT 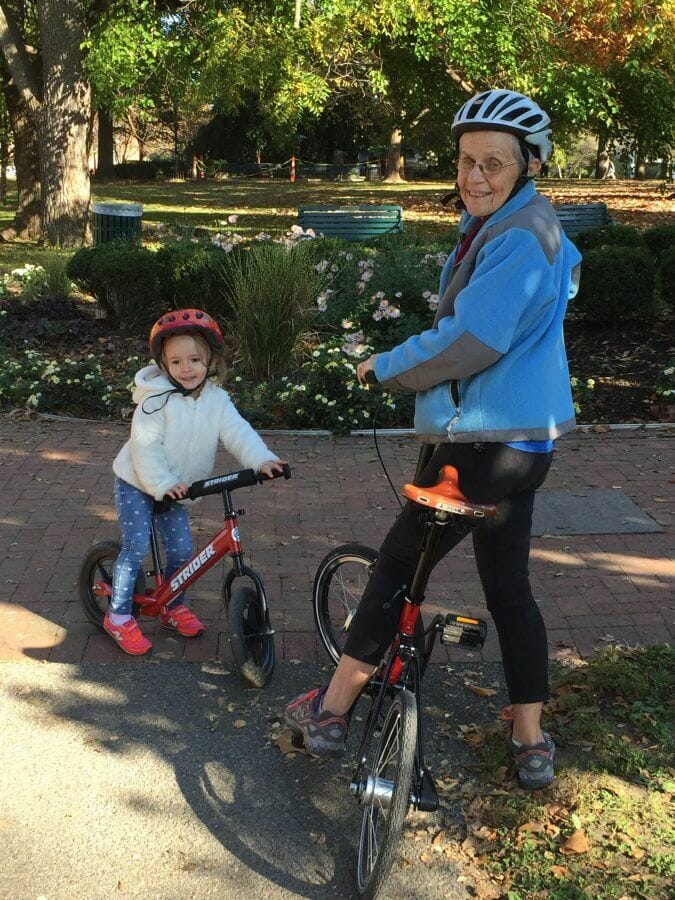 .
I heard about the pakiT from a Bike Friday e-mail message and originally thought about it for our grandson, who was starting college.  I did call Bike Friday and upon hearing the price I knew it was more than we could spend for him, but I did think about it for myself. We travel each year

to Georgia and do a lot of biking.  The pakiT would fit in our trunk for the trip down. Once we are there this Feb., I plan to fold it up, put it in the car  take it out to the nearby sea islands.
.
We previously owned a Tandem Two’sDay and rode it across Ohio and on a Nova Scotia tour.  Taking that bike on the plane was a real treat.  Using the granny gear on hills was a life saver.  Nelson, my husband, injured his knee on the first part of the Nova Scotia trip and had to ride sag. He, as a result, toured all the bars.  Every evening, I paraded the Two’sDay through the camp ground to see who wanted to try it with me  for the next day and was able to have 5 great days of riding with interesting people.  I sold the Two’sDay this year on e-bay and bought the pakiT with the money I made.
.
I live near downtown Columbus, Ohio in German Village.  I ride around the village for errands, around the park for fun and over to the trail which follows the river for a longer ride.  Previously, I was riding a larger bigger heavier bike, which we nicknamed the couch, so the pakiT really has replaced the bigger bike.
.
The pakiT makes riding downtown easier for me.  Turns don’t take so much room. Also handling the bigger bike hurt my shoulder on a long ride.  I no longer have that trouble with the pakiT.  I even take the pakiT over to the the school yard nearby and weave in and out between the

playground poles and when I am finished I feel that I have had the ride I needed.  I never even thought of doing that on the couch. Also, I love folding the bike up and bringing it inside without worrying about messing around with a chain and lock in the cold. Right now, we keep the pakiT in the dining room.  I just unfold it and head out the door.
.
Recently, I took the pakiT to the gym, folded it up and put it next to the equipment I was using.   The manager objected because he was worried that everyone would want to bring their bike inside.  I pointed out how the bike, once it is folded up, is a small package, so now, with the manager’s permission, I take the pakiT up in the elevator and put it in the employee break room. So far, no one has objected.
.
I did ride the pakiT around the park this fall with my granddaughter who was on her Strider.  She and I  were close enough in size on our bikes that we tooled along having a great conversation about favorite trees.
.

3 thoughts on “The pakiT: A Lighter, Easier, More Convenient Bike”