The Joys of Traveling Japan on a Folding Bike 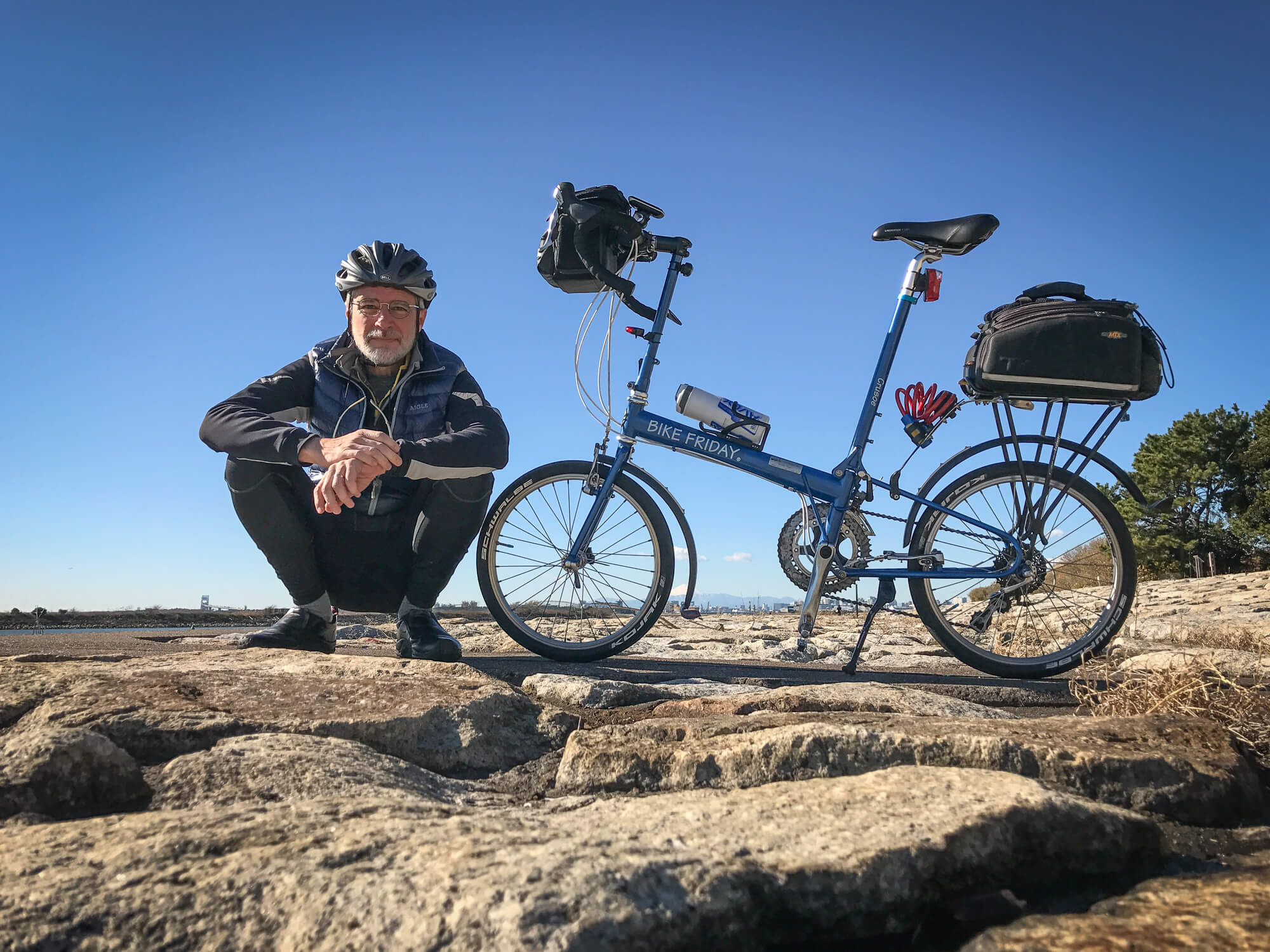 A Bike Friday Pocket Crusoe has been a part of my bike collection since 2011.  In the past I have owned more bikes at a single time, but at present, my “stable” consists of three quite different types – a road bike made by Giant, the BF, and more recently a Brompton ML6.  I guess you could say that the Bike Friday sits in the functional middle of the group, as it rides and nearly as fast as the Giant (and was built to be similar in dimensions to it), yet it is able to fold for transportation and storage, like the Brompton.  The Bike Friday is my touring machine, and have been extremely pleased with it since it arrived.

I have lived in Japan since 1989, first in Nagasaki, where I spent thirteen happy years riding a mountain bike through the hilly countryside and swimming in the ocean six months of the year. In 2002, a university in Tokyo offered me a post, and only a couple of things caused me to consider declining the offer.  Looked at from Nagasaki, a provincial city surrounded by nature, the metropolitan Tokyo-Yokohama area appeared to be a concrete jungle pierced by either narrow, meandering roads filled with pedestrians, or thundering expressways clogged with cars and trucks.  Swimming was obviously out, and cycling appeared to be a less than pleasant prospect. 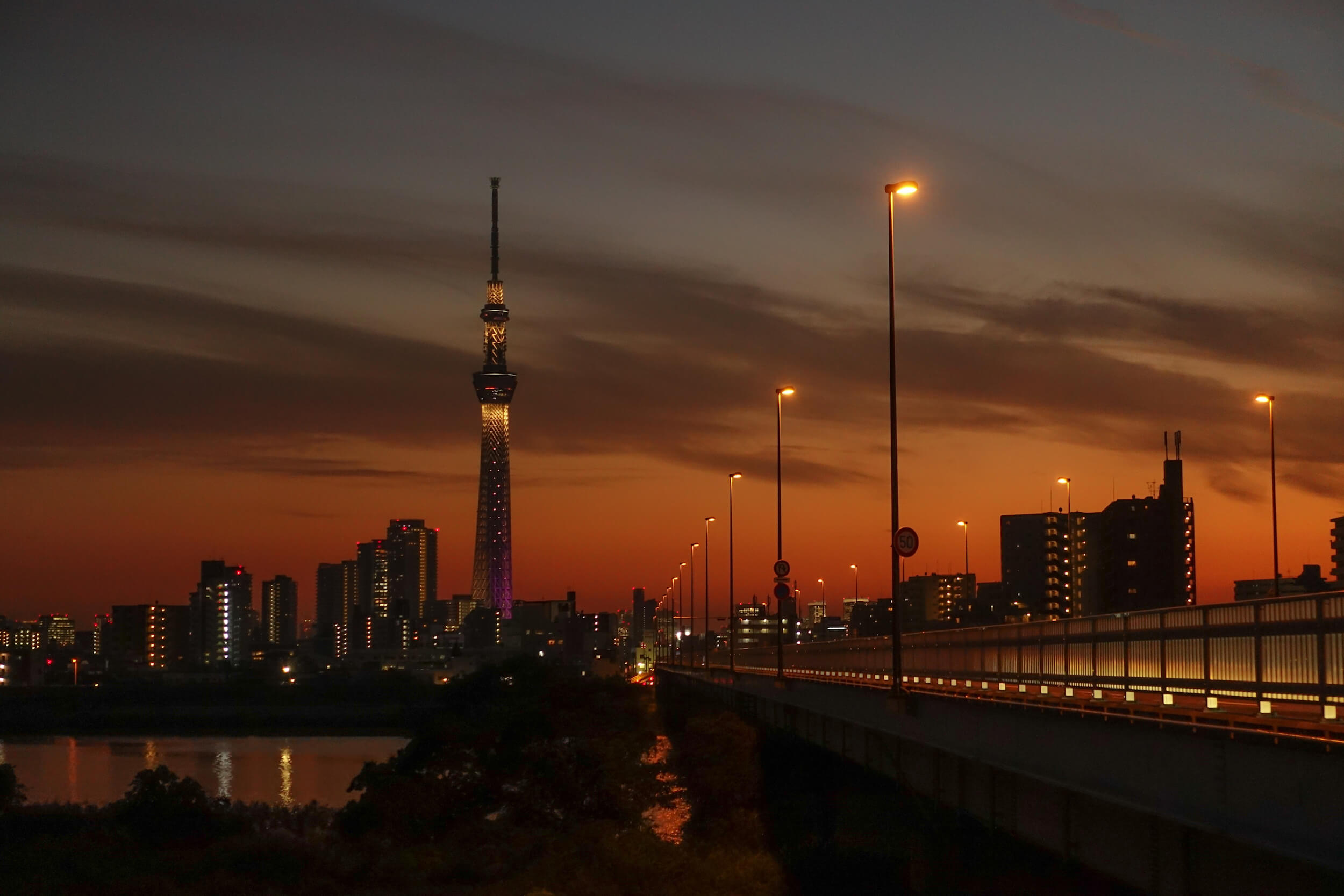 I eventually decided to take the job, and worry about my hobbies later.  I am a classical musician (pipe organ performance and choral conducting are my specialties), and the difference, career-wise, between a provincial town and a world capital are obviously considerable.  For the past fifteen years I’ve been very happy here – as a musician.  But how about as a cyclist?  As it turns out, Tokyo is a wonderful place for riding.  Like any large city, cars rule the streets, but I have found drivers here to be uniformly cautious when it comes to cyclists, and have never encountered any aggressive behavior.  Early mornings rides through the wide city streets can be great fun, especially when passing famous spots such as the imperial palace or Ginza shopping area.  I am lucky in that I live 10 kilometers from the Arakawa River.  From the point at which I enter the river system, I can ride upriver to the countryside of Saitama Prefecture and beyond, or 20 kilometers downriver to Tokyo Bay.  From Tokyo Bay it is a short hop to another grand set of cycling paths on the Edogawa River.  Follow those upriver and you wind up on an even greater system along the Tonegawa River.  In other words, I have a virtual expressway for bikes within 30 minutes ride from my home.  I can ride hundreds of kilometers without encountering a car (once I hit the river, that is).  For fifteen years now I’ve used this system of cycling roads as a way to get out of the city easily, as a training course with infinitely flexible courses, and a place to simply get away from work and the city life. 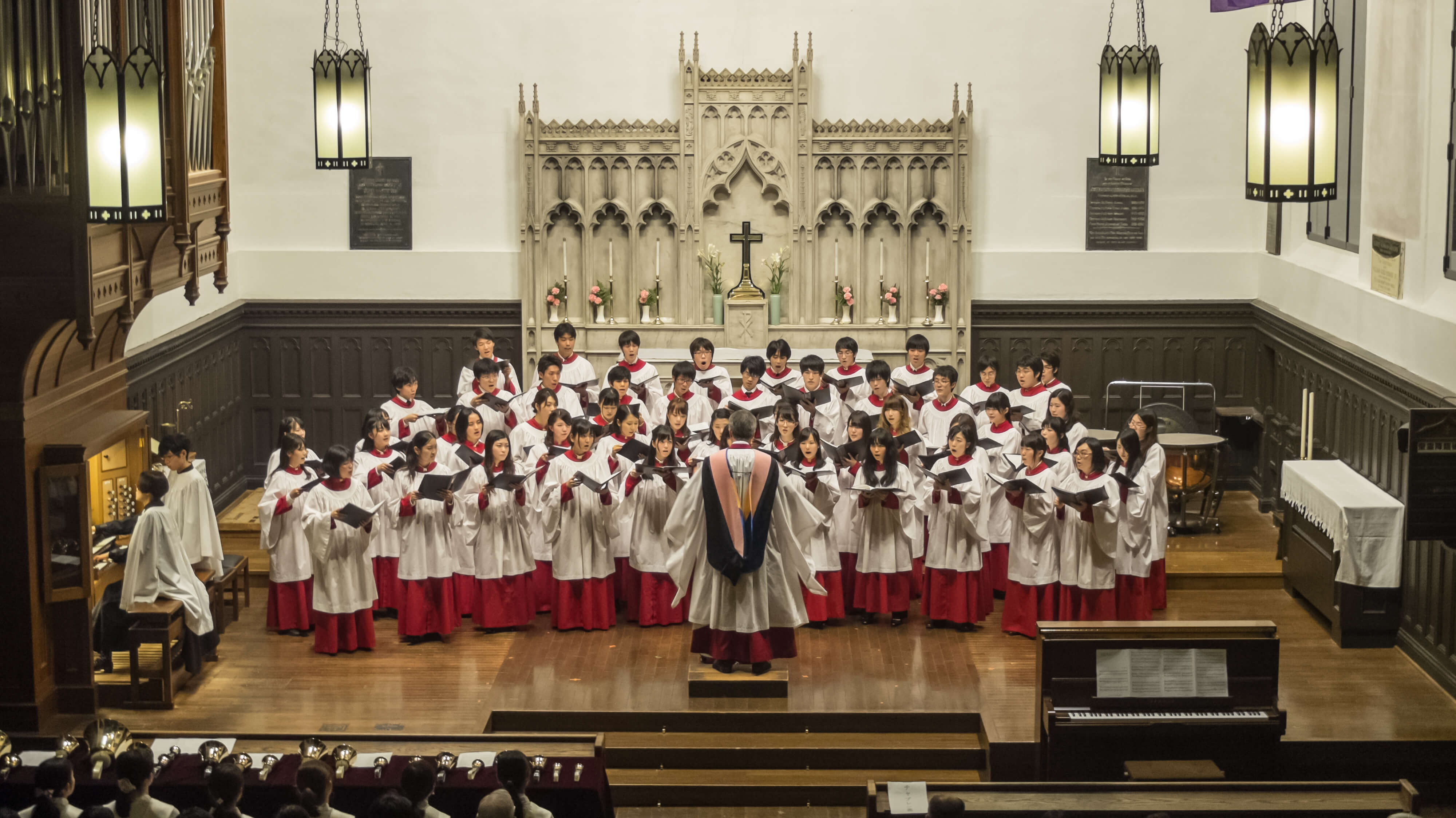 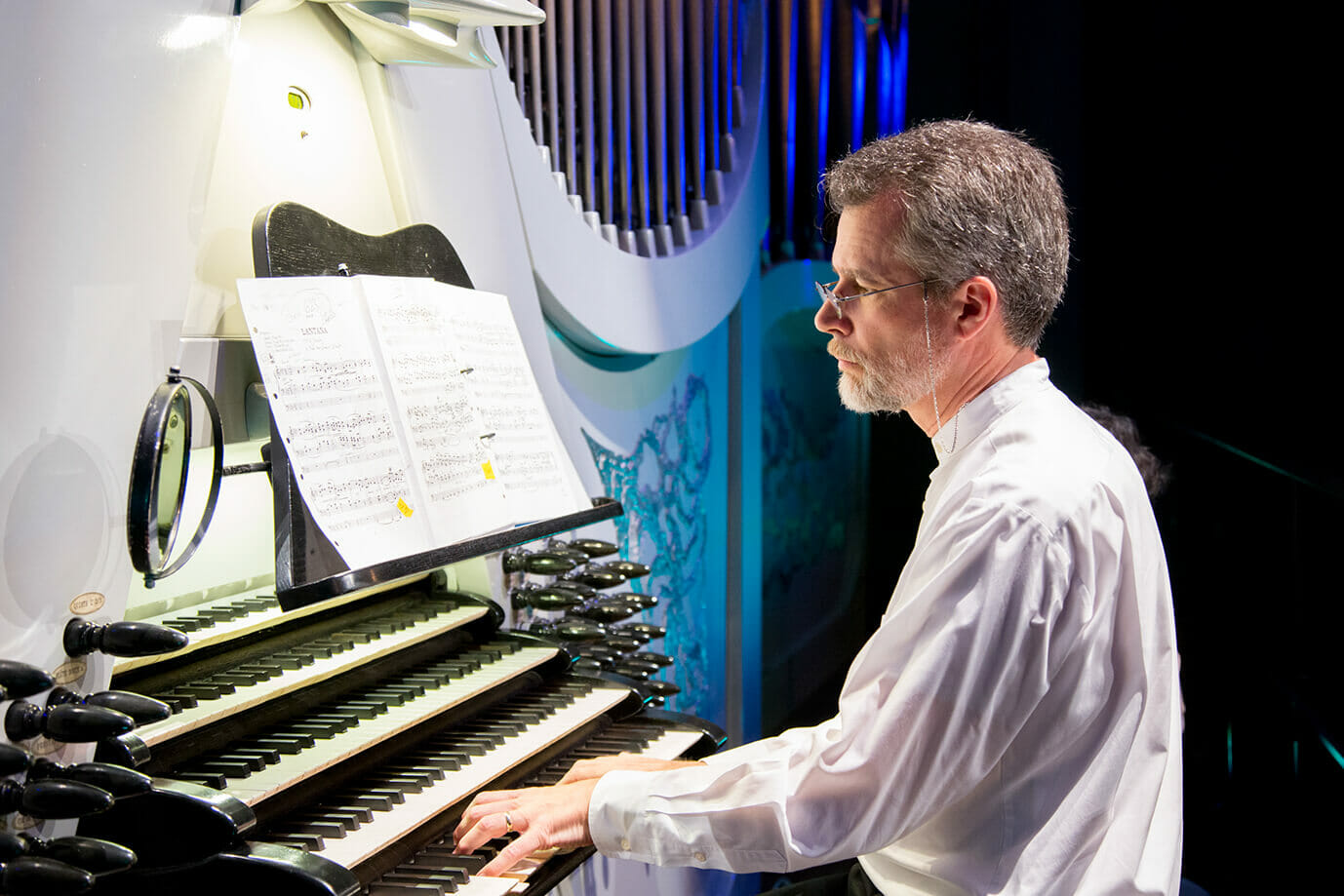 Getting back to bikes, it took several years to make the jump from mountain bike to road bike. Once I did, I was happy for quite a few years with only my road bike for the river rides. Eventually, though, I realized that I had covered just about all the area one could in a day ride, and was just recycling my routes.  An overnight ride with two companions that included bagging up our road bikes for a train ride home was an eye opener. With that strategy, I could ride as far as I liked in any direction without worrying about the return trip, thus doubling my effective cycling range.  For me, the problem was the bothersome process of bagging a road bike. 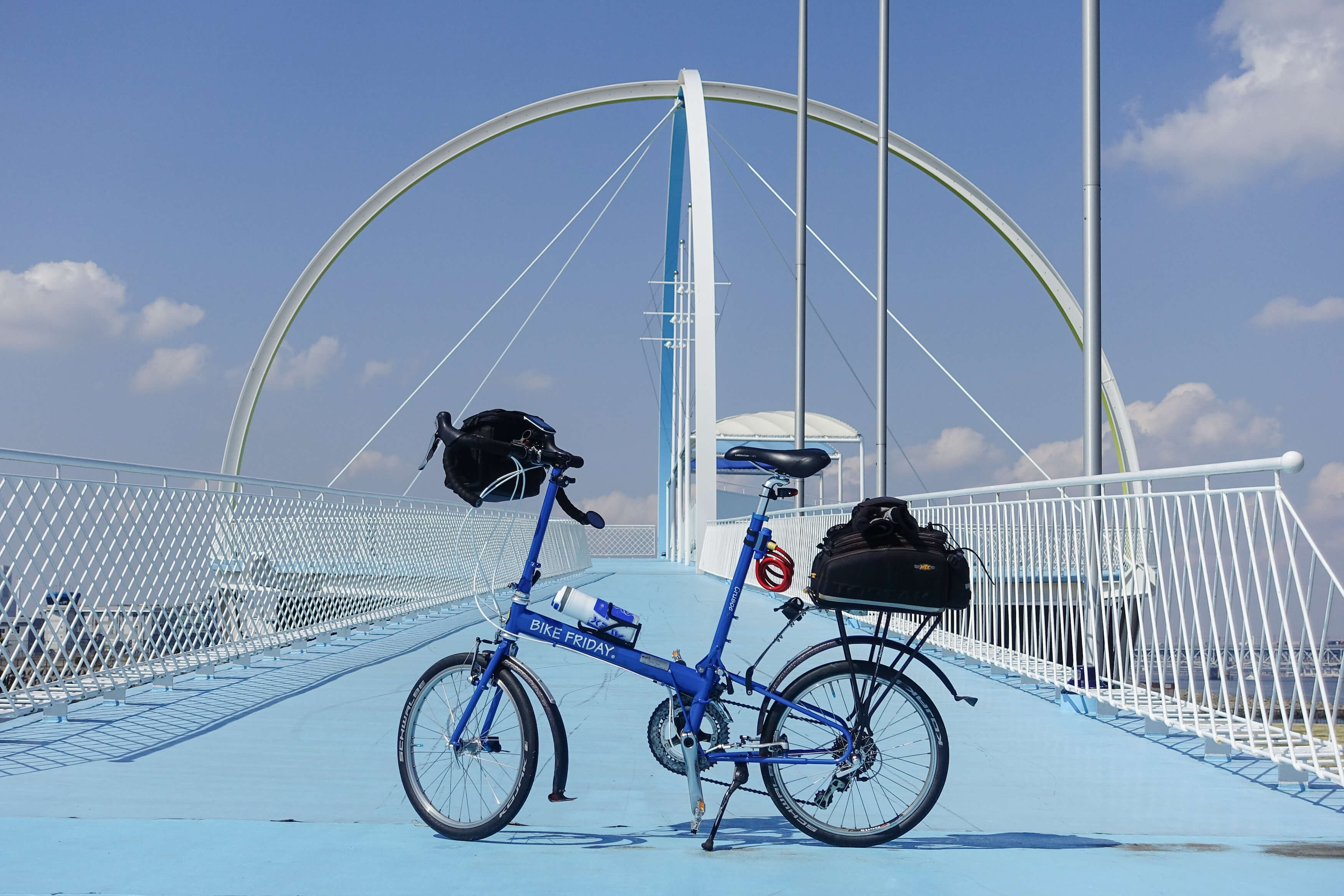 A colleague at work suggested I look into Bike Friday, a make I had never even heard of at the time, and which was only available from two dealers in the Tokyo area.  The idea of getting a hand-built steel touring bike that would ride well AND fold really appealed to me though, so I ended up ordering my Pocket Crusoe from Cycletech in Takasaki City.  I’ve done a lot of long rides on it over the years, and have really appreciated its stability when loaded, its reliability, and the fact that I can bag it up in a few minutes and use the great public transportation here to train home.

Twice a year the chapel choir at my university goes to the countryside for a week of intense training, which I lead.  I always take one of my bikes along.  The spring camp is held on the coast in Chiba Prefecture, and the summer one in the mountains of Gunma Prefecture.  For the past several years I’ve departed several days before the choir in order to do a mini tour, staying in hotels and hot spring facilities on the way.

A ride to spring camp a few years back took place after a heavy March snow.  Though it had mostly melted by the time I started, a layer of black grit coated the roads for the entire 130 kilometer ride.  A relentless rain added to the bleak atmosphere.  The latter half of the ride was in the mountains, and before I knew it, the grit and rain combination had worn my brake pads down to nubs.  I will never forget coasting into the hotel parking lot at high speed with my feet jammed to the pavement as ineffective makeshift brakes.  The hotel’s wonderful hot spring bath and fine food did help to compensate, though I think I lost a few months from my lifespan, thanks to that last hill.  The following day involved riding down to the Pacific coast, which was supposed to have been a reward for the climbs of the first day.  Without brakes, though, it was a bit trying.  Every time the bike picked up speed I’d either hop off and run beside it, or try the shoe brake trick.  In the end, the road leveled out, and I did enjoy a sunny coast ride.  I suppose the village bike shops I appeared in still remember me, smoking shoes and all, as I searched their shelves for brake pads.  None of them stocked normal road bike brake pads, though, so the rest of the day was spent wearing out my shoes.  I did solve the problem by calling Cycletech, who kindly shipped out new pads by express mail so that I could swap them out the following day and ride in much calmer fashion from day three.

Another ride to choir camp was also cursed by rain, though this time the brakes did hold up.  In early September I rode the first leg of the trip along several river dike systems up to the foothills of the mountains in Gunma Prefecture. Summers are extremely hot in Japan, even when it rains, so rain gear is useless – you just get wet. The second day involved a 1500 meter climb into the mountains in hard rain. Looking back at the day, though, I realize the rain was a blessing in disguise, as it kept the summer heat at bay.  There are fond memories of the ride, of course.  My bike was as comfortable as anything on the road, and as stable as a little truck with 10 kilos of gear on the rear rack.  Since a Bike Friday is completely customizable, I ordered mine with a relatively low gear ratio, which has worked out nicely for climbing even when the bike is loaded with gear. A chance happening onto a century-old Japanese farmhouse that had been turned into a museum made a wonderful break spot. Long tunnels on deserted mountain roads made for good singing and whistling (and shelter from the rain). And once again, a successful arrival at a traditional Japanese inn, complete with hot spring bath and great food, erased any negative feelings from the day that might have been dancing around in my mind. 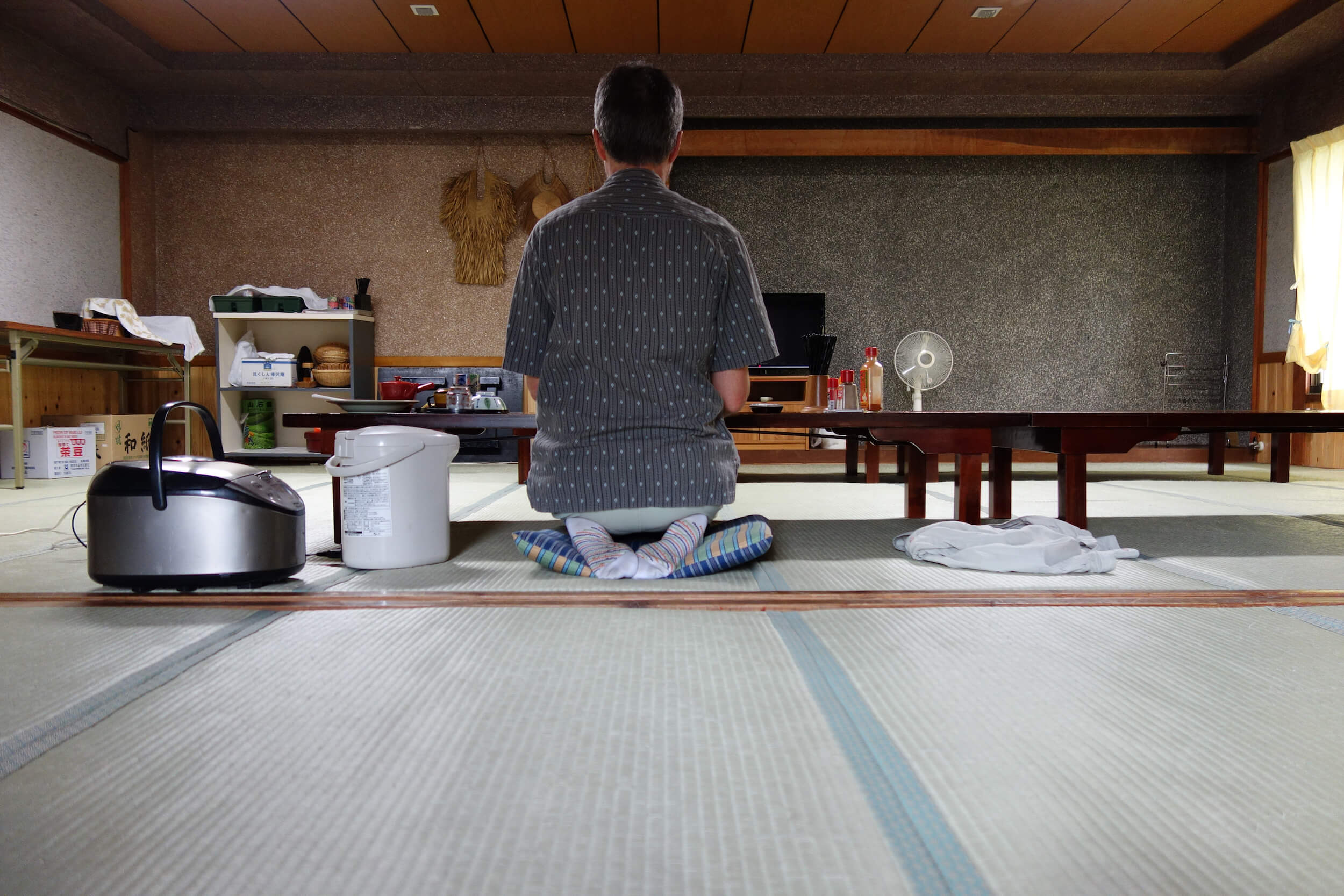 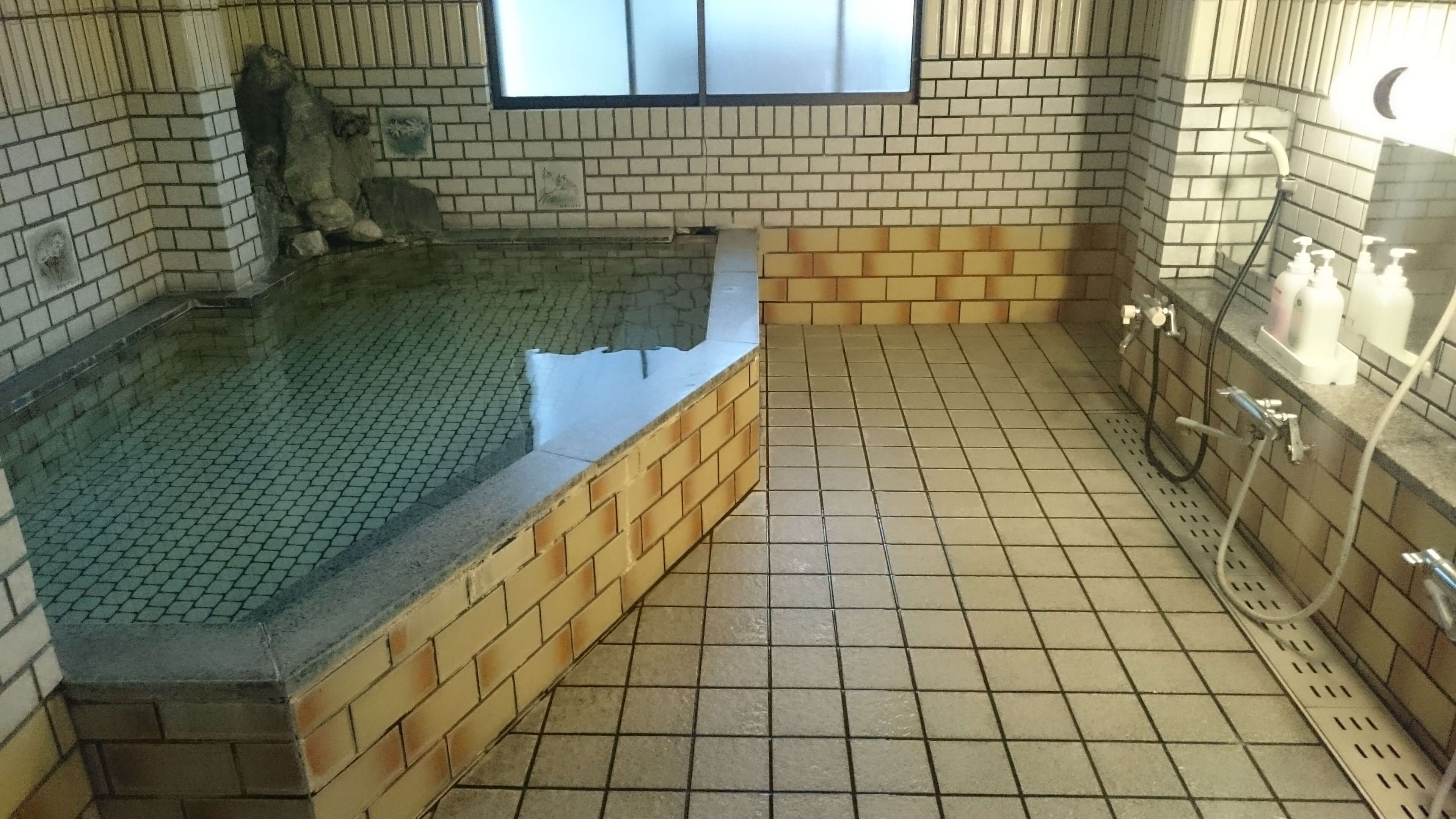 That year a large typhoon hit while we were at camp. Though we experienced no flooding, areas downriver were devastated, with rivers breaking through dikes and flooding homes. The conditions for the ride home were too dangerous, so it was a lifesaver to have a folding bike which could be popped into the luggage hold of the bus for the trip back.

I do still ride my road bike on occasion, but I have to admit that I prefer my Bike Friday, and mainly keep the Giant around for others to use when they visit.  As I have gotten older, I have come to find an upright riding position more and more comfortable. Thanks to the fact Bike Friday uses standard components, it is possible to completely change one’s setup – I’m considering swapping my drop bars for flat ones, along with the gear and brake component changes that will entail. It is great to be able to have the freedom to make these changes as desired. I think the BF and I have many more adventures ahead as we continue to explore Japan together. 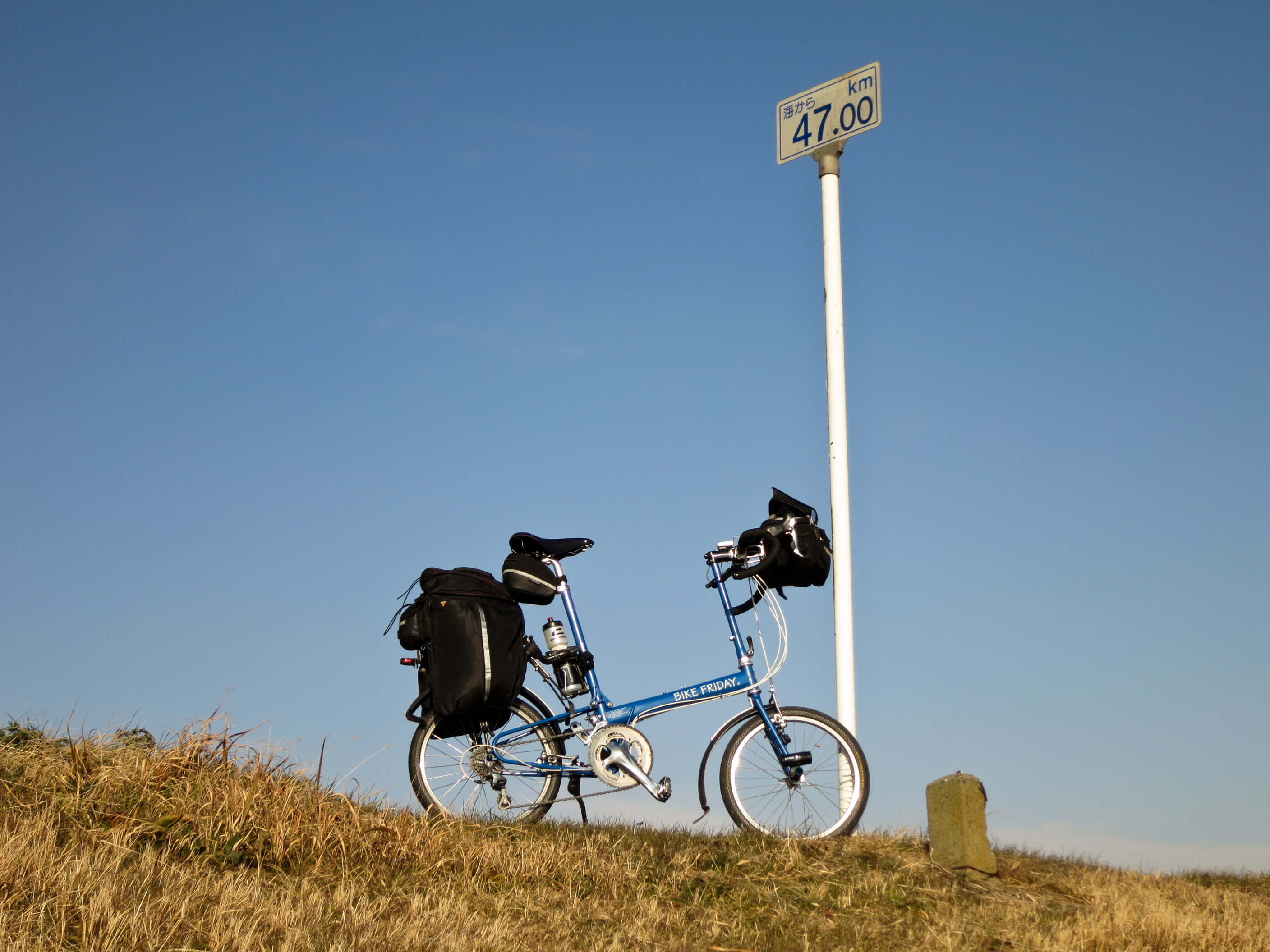 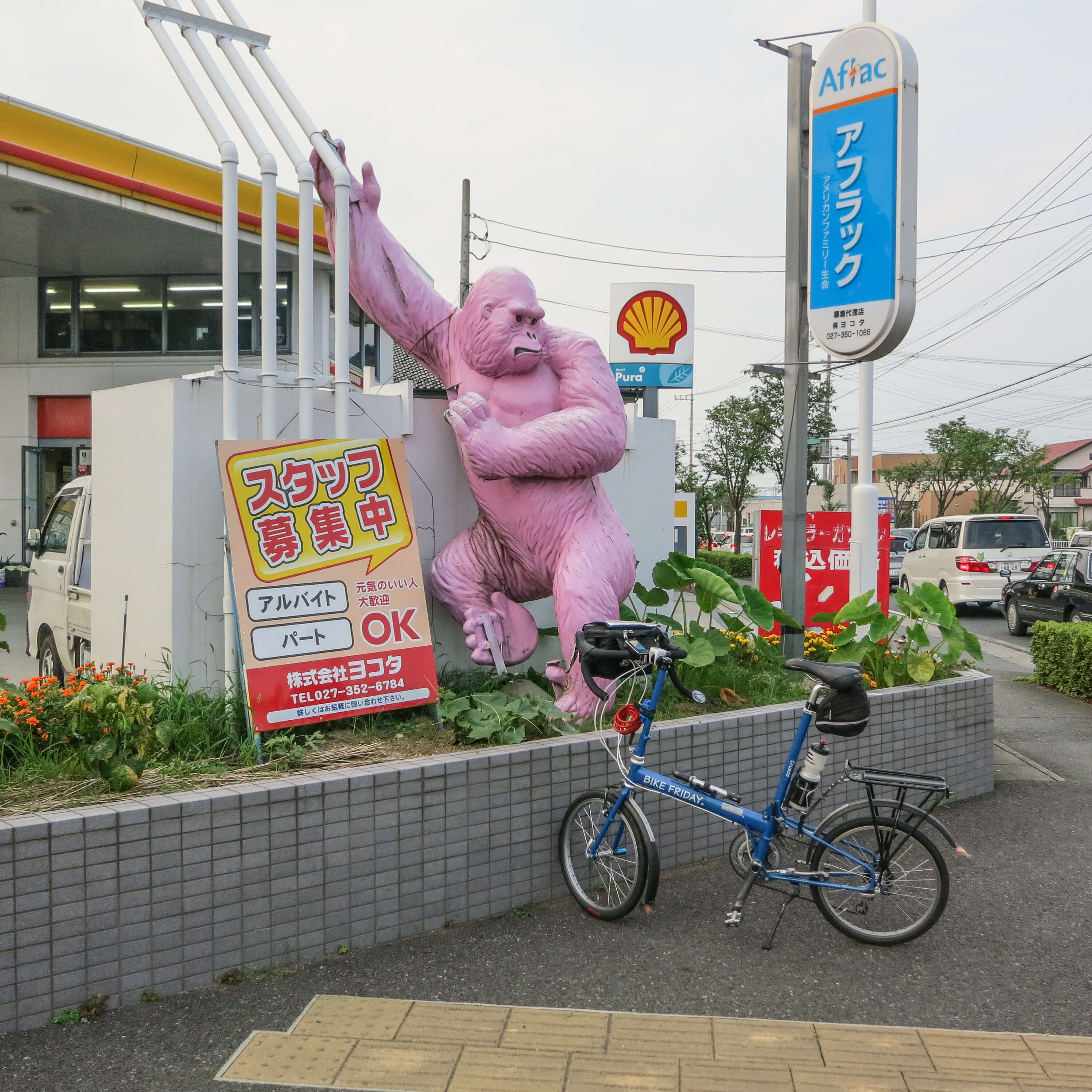 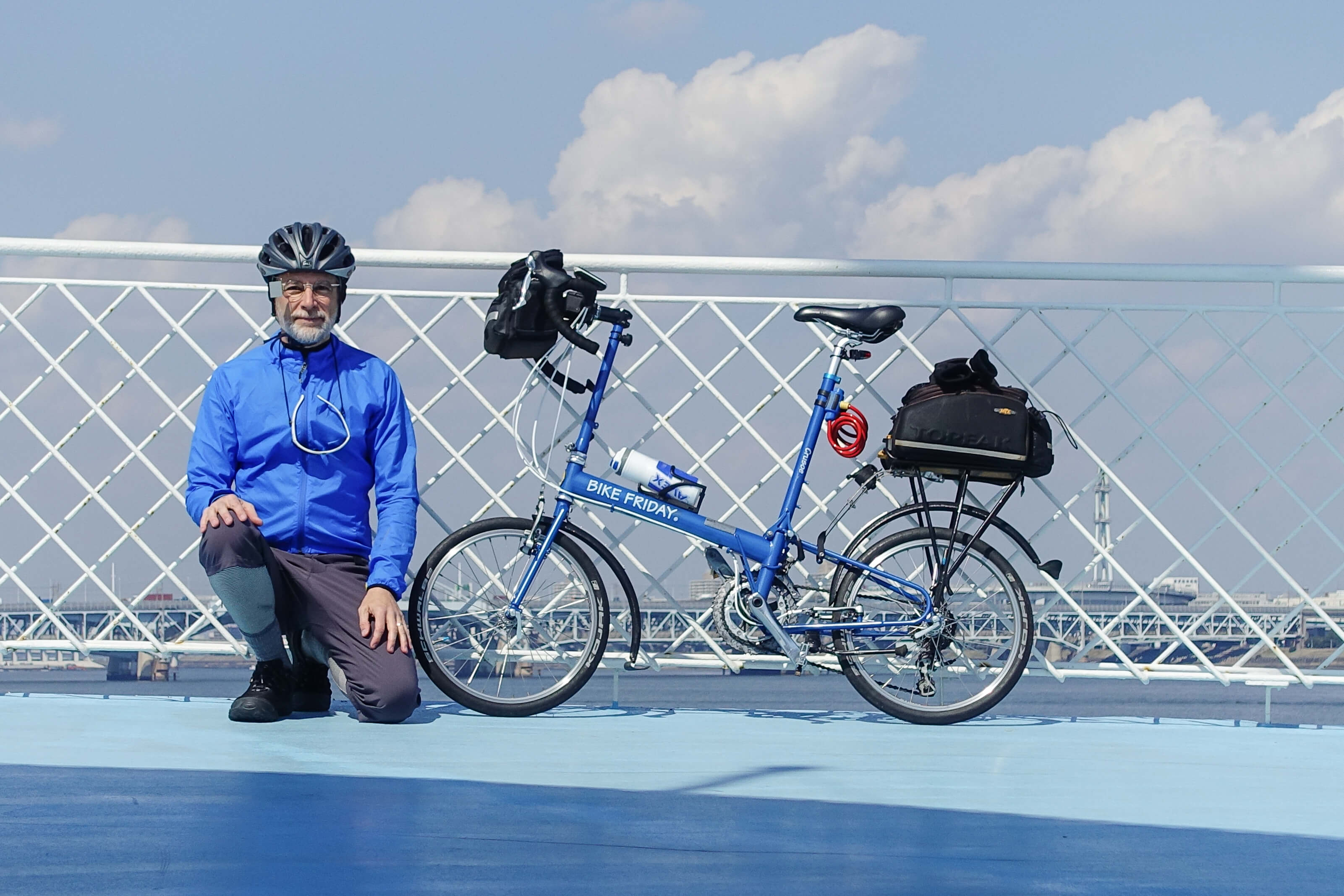 Scott Shaw is a conductor and organist in Tokyo. When he isn’t teaching or playing music he’s probably cycling. Find more of his stories and images at http://scottshaw.org/ and follow him on Instagram @senkawascott