Two Pocket Crusoe owners take on the toughest climb of their lives:

We are always a bit apprehensive when we close the Samsonite lids on our Crusoes, wondering whether a curious TSA inspector might dislodge our careful placement of each component into the suitcase. The bikes have flown nearly a dozen times, and other than a few superficial bumps and bruises, the Ultegra shifters, derailleurs, wheels and other components have always survived the journey. This time was no different- the bikes arrived in Toulouse, France, with no evidence that TSA even opened the suitcases.

It was our 6th trip to Europe and second trip to France with the bikes, and this time we wanted to visit the Pyrenees, which we knew would include some challenging climbs. Although we have roughly 10,000 miles on the bikes, we have never tested them on the hills we were likely to encounter in the Pyrenees, especially when carrying packs.

On all of our trips, Nancy and I research the regions/locales that we are interested in visiting, but we do not plan our routes ahead of time. We generally reserve a hotel in the arrival city, often near the airport, for our arrival and departure days. This allows us to store our suitcases in the hotel while we are touring. Other lodging arrangements are made on a day-by-day basis, usually in 2-3 star hotels. We gave up camping years ago, opting instead for a soft bed and the other luxuries of ‘credit-card’ camping.

During our trip, we choose our daily routes based on the following criteria 1) cities we would like to visit/ points of interest, 2) anticipated weather, and 3) when and where we need to end up to catch our return flight. The beauty of touring in Western Europe is the proximity of small towns, offering wonderful historical character and inexpensive last-minute lodging opportunities (often with negotiable rates during off-season). 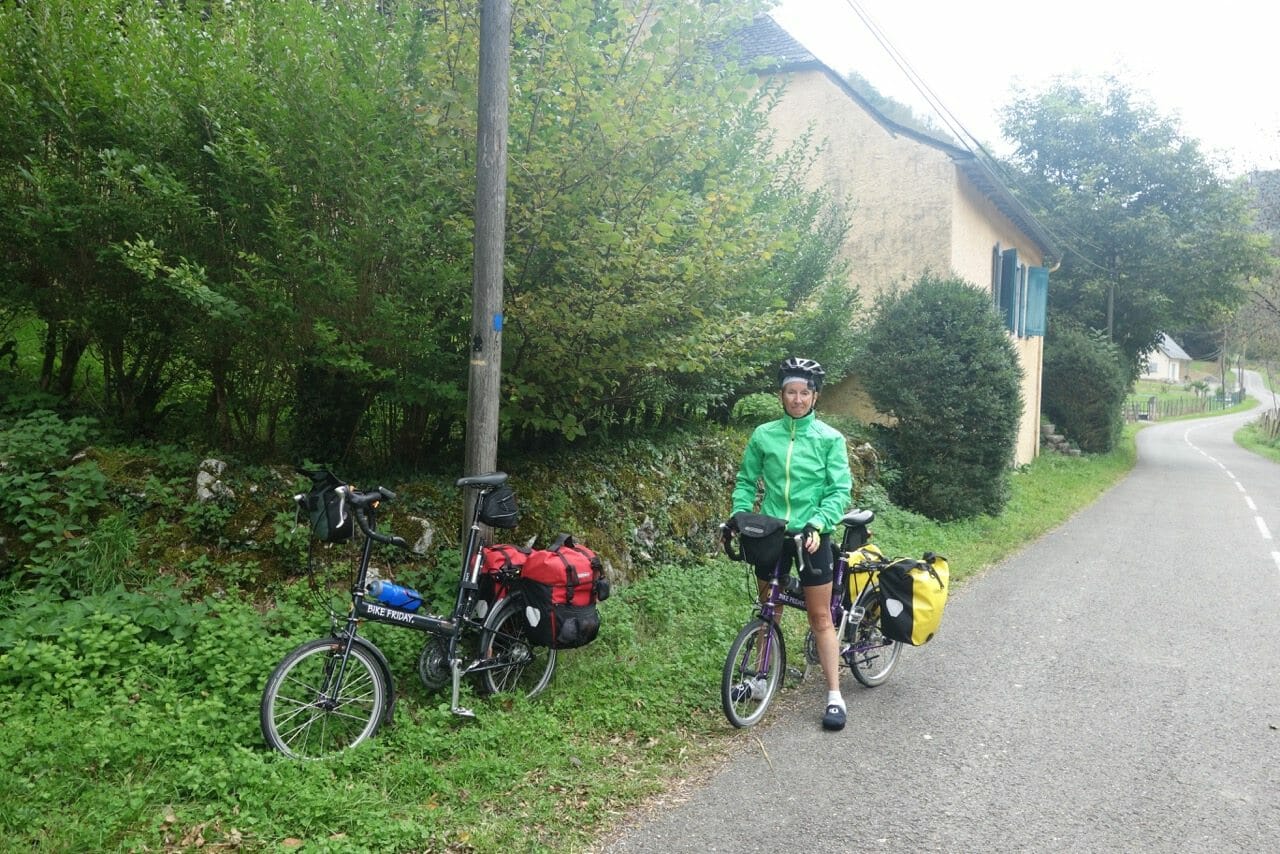 We started our trip on Sept. 17, heading west and south from Toulouse toward the Pyrenees- the weather was looking good. After one night in Auch, and a second in Tarbes, we arrived in Argeles Gasost, a beautiful town in the foothills of the Pyrenees. This was a great starting point for some of the famous climbs in the Tour de France. Nancy and I decided to begin our first serious climb by heading up the Col du Tourmalet. We decided to do this climb without packs, in part because we were uncertain how the bikes (and Nancy and I!) would handle such long down hills on narrow roads, with numerous switchbacks and steep drop-offs. We were especially concerned because we were carrying nearly 35-40 lbs on each bike, which in Nancy’s case is more than a third of her total body weight. So we made a reservation for a second night in Argeles Gazost, left our gear, and headed out in the morning on what turned out to be a cloud-free, 70 F day. 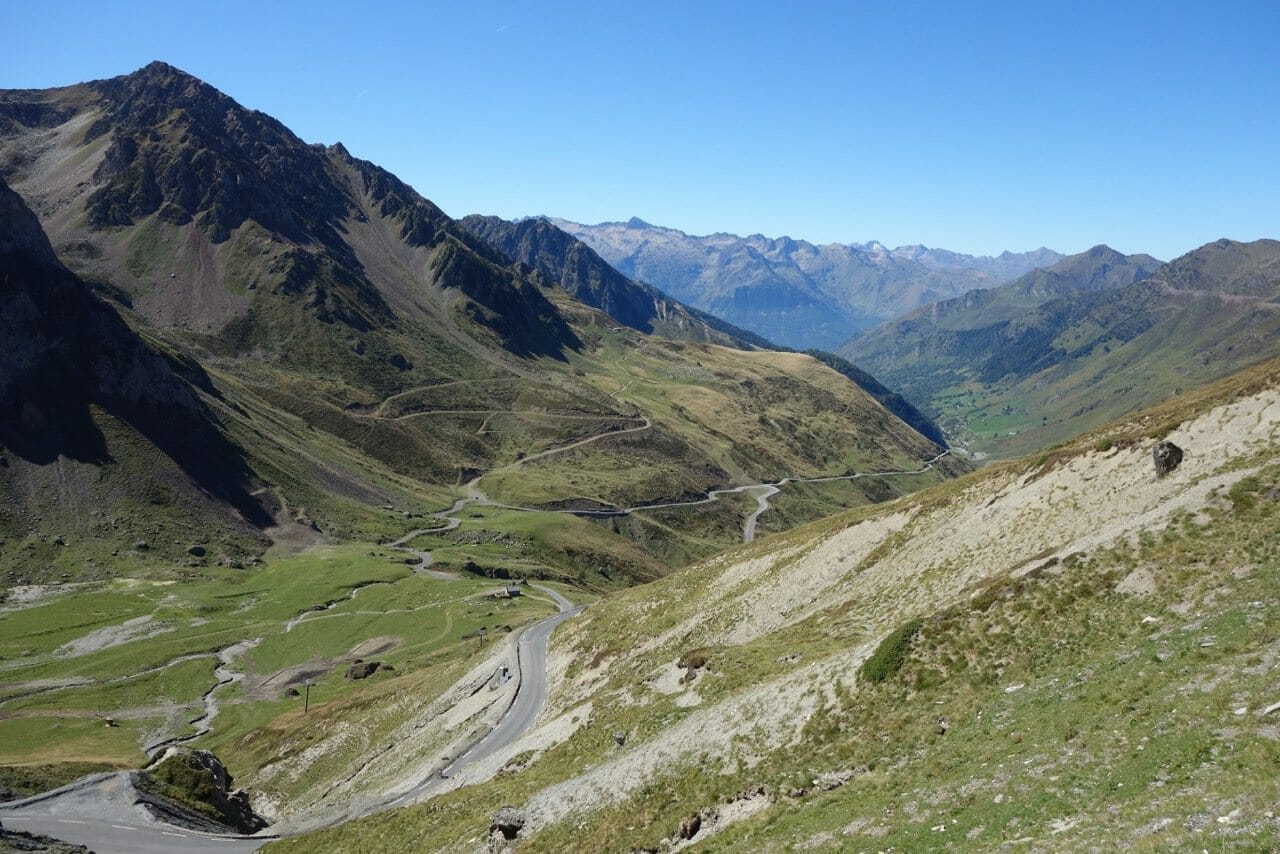 After an 18 km (11 mile) slightly uphill warm-up toward the town of St-Sauveur, we began the climb itself, which is approx. 19 km (12 miles), averaging 7.5 % grade, with the pitch approaching 10-11% in some places near the top. What a spectacular ride, with dozens of other bikers also making the famous climb on this Sunday morning. As expected, we were the only two riding on Bike Fridays, but we met another rider on the way up from the UK who instantly recognized the bikes and struck up a conversation with us. There was a near party atmosphere at the top of the climb, with bikers of all ages and abilities, taking memorable snapshots. The ride back down was equally spectacular. 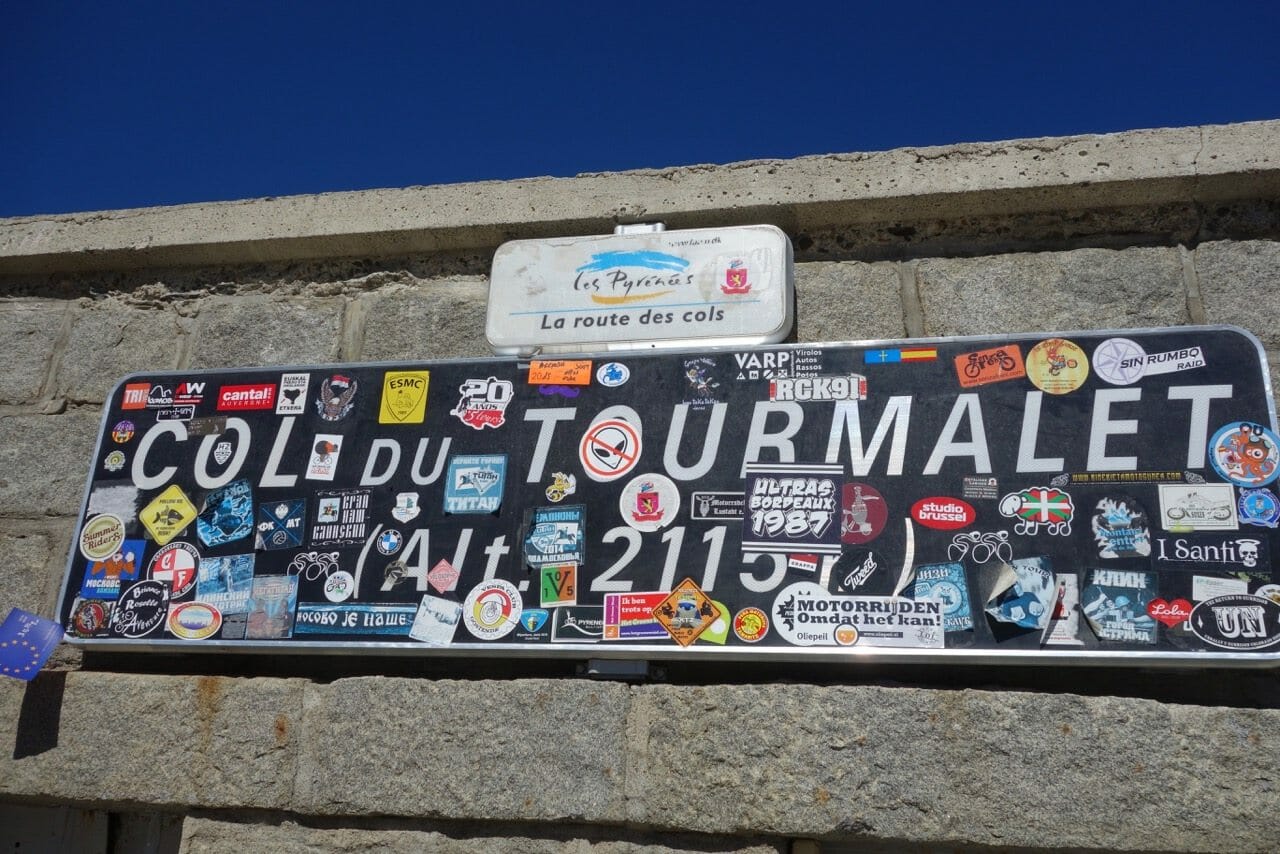 After gaining some level of confidence on the Tourmalet, we headed west with our packs to tackle other climbs as we made our way toward the Atlantic. By the end of the first week, we had climbed Col du Soulor, Col d’ Aubisque, Col de Marie-Blanque, and Col Bagargui. The roads were narrow but in excellent condition, and the only obstacles were sheep, cows and horses that wandered onto the road while freely grazing the hillsides. Col Bagargui was a bit of a surprise since the there were several kilometers above 10% grade, including one kilometer at 13% (signs marking each kilometer inform you of what grade lies ahead). Climbing with our packs made this last climb very challenging, and we could barely keep a fast walking pace on the steepest portions (thankfully we outfitted the bikes with a triple crankset!). The bikes performed beautifully both up and down; the only technical issue was an occasional squeaky brake pad, which had the unexpected benefit of shooing the livestock on long descents. 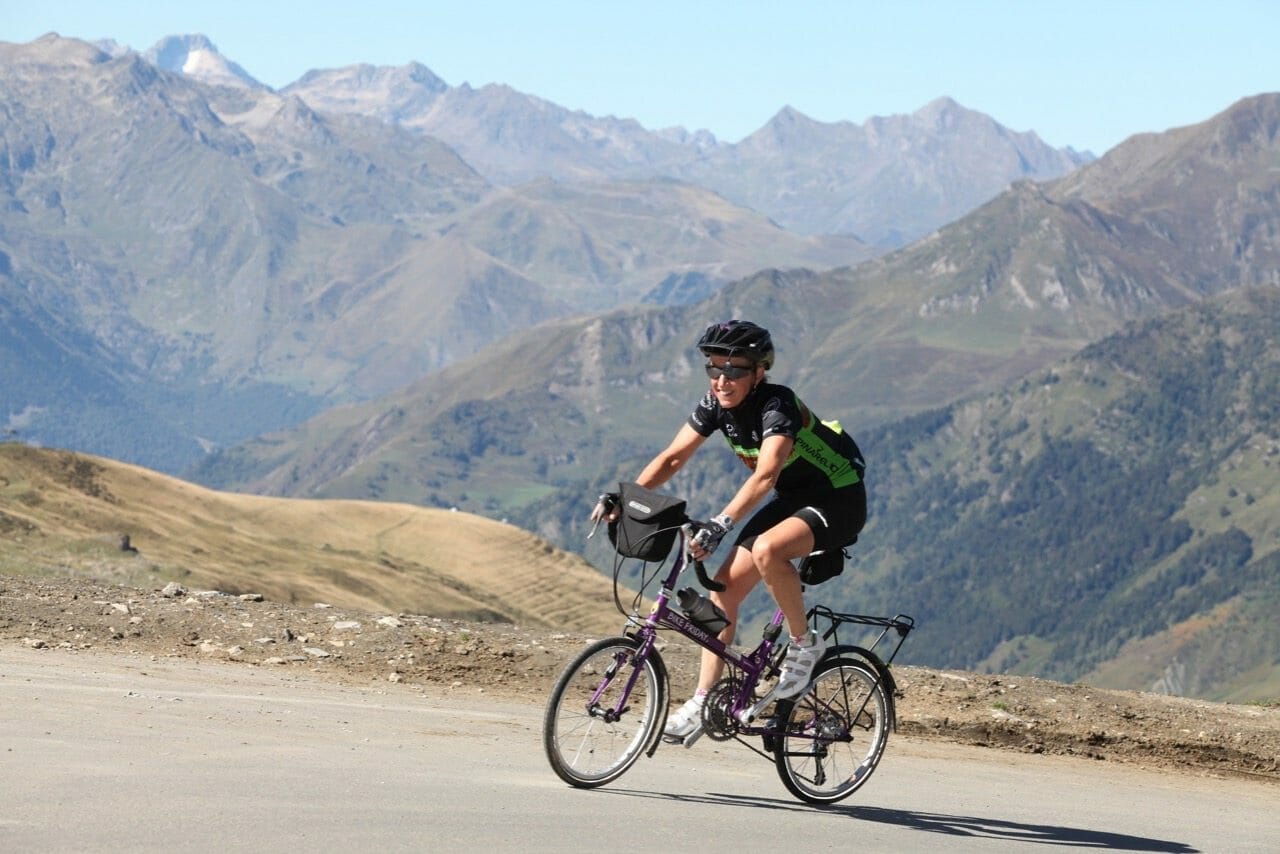 After reaching the Atlantic in St. Jean Pied de Port, we headed south to San Sebastian, Spain, taking a gorgeous coastal route along Monte Jaizkibel. From there we decided to head back into France and up to the city of Bordeaux. Riding north from Bayonne is flat and somewhat less scenic, so after crossing the border we put in a couple of longer days, in order to leave time for wine tasting in and around Bordeaux. From there we made a short jaunt to the medieval town of St. Emilion. The riding north of St Emilion was beautiful- but after a couple of day rides, we ran out of time so we took a train back to Toulouse to catch our return flight.

Prior to our trip, we were uncertain about taking our Friday’s into the Pyrenees, not because of the challenging climbs, but rather the long descents with gear, often on narrow roads lacking guardrails. Although disc brakes would have added a measure of comfort, the V-brakes (with new pads!) did well. We are always amazed at how comfortable these bikes are, and how well they perform- we averaged roughly 45 miles per day for nearly 3 weeks and we had no technical issues. This last trip convinced us that these bikes can handle any terrain, anywhere, with style. Ride on! 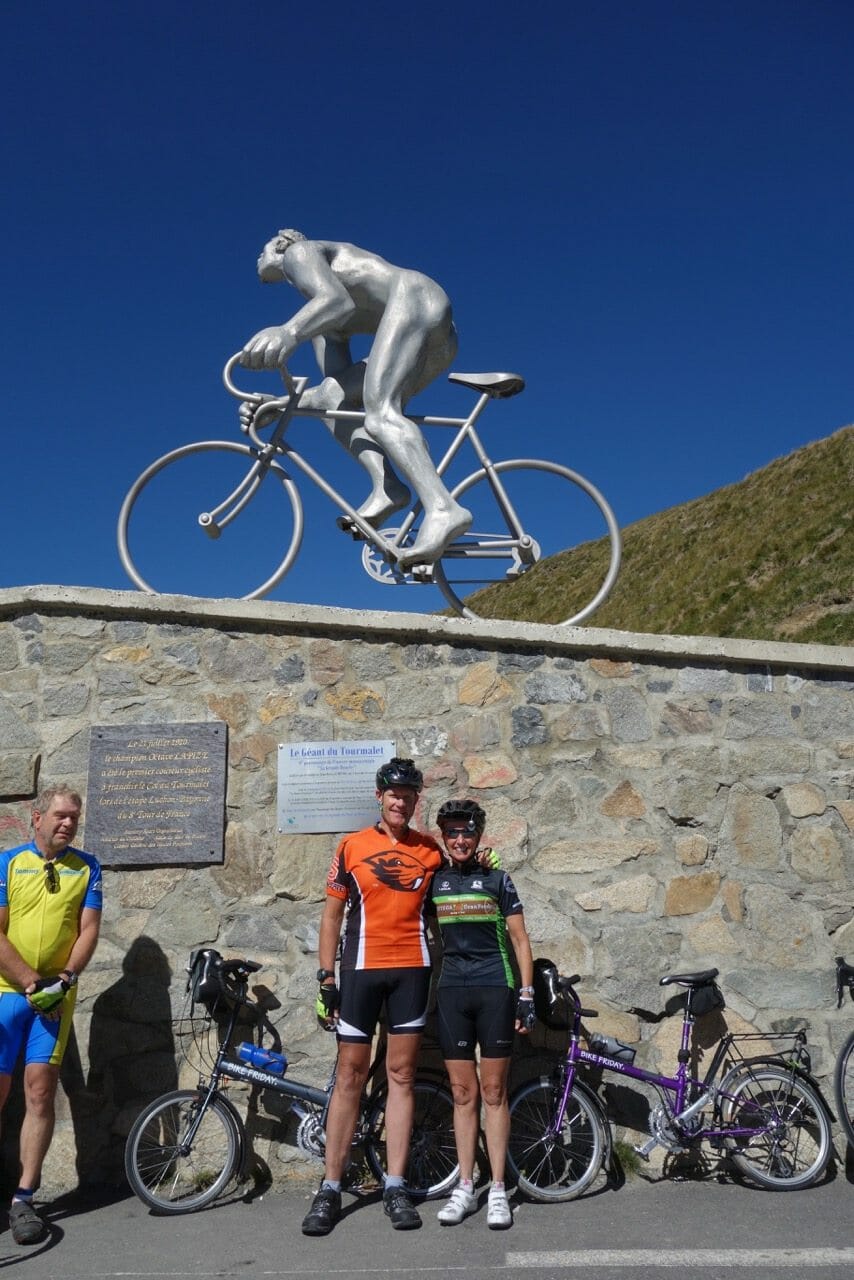 7 thoughts on “Tackling the French Pyrenees”