Lightning in a conference room

The beauty of life as a journalist is the ability to insert yourself into experiences the average person dreams about those long, quiet rides.

Like, for instance, sitting in the downstairs conference room as Co-Founder Alan Scholz and Head Designer Rob English brainstorm the next Bike Friday project. 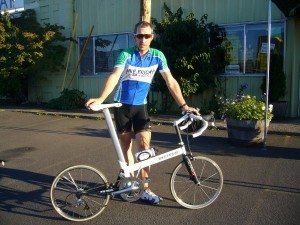 Hey, listen, I can’t tell you folks everything we do as we do it. I’m certainly not about to tip our hand, so this isn’t a major announcement. This is more about the background.

So, I can say this about the pow-wow. The topic is commuting and, well, Bike Friday knows only one way to attack any project.

I’m still learning my way around the place, the business, and the people.

Alan’s brain appears to have one speed. It’s like trying to keep up with that dude or dudette with the fixed gear. You just watch and listen and wonder, How does he do that?

Rob’s on the same wavelength as Alan and adds a burst of youthful energy as they collectively ascend to the stratosphere of brainstorming. It’s like watching Contador and Schleck on the Tourmalet, realizing these two boldly go where the rest of us dream — without looking back.

I sit in awe, realizing that anyone who has ever rolled off on a Bike Friday has, at one time or another, envisioned this kind of meeting. Understanding that the Bike Friday experience began, essentially, as an idea. You can envision Hanz and Alan Scholz firing ideas back and forth. To see it unfold in person exceeds any expectation.

Alan likes to remind us that Bike Fridays are bicycles made by bicycle people, and that’s what sets them apart. This innate knowledge of what will work for a real cyclist out there on the road, and what won’t, is gold.

What strikes me as funny is that a lot of our first-time customers, especially those interested in making commuting a lifestyle, aren’t necessarily cyclists. Not in the stereotypical sense.

But when they hop on one of these Bike Fridays, they’ll know what it feels like to be a real cyclist.

One thought on “Lightning in a conference room”