In 1992 the first Bike Friday was delivered. We named it the “Sport 14”. It’s now known as the New World Tourist and is still the most popular Bike Friday ever! 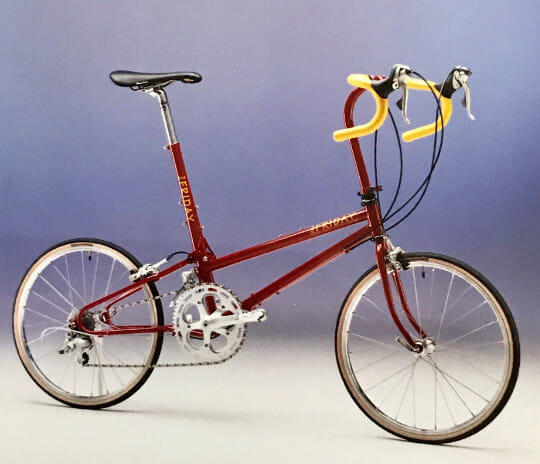 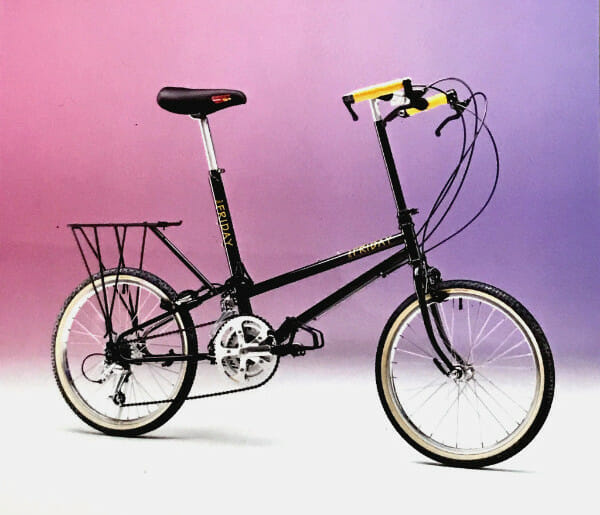 Long before the first Bike Friday was born there was the discovery of personal liberation: The Bicycle. 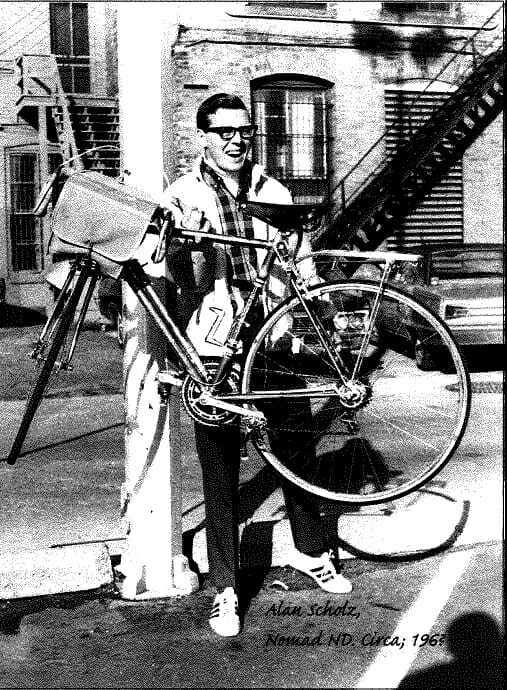 Here I am age 18 or so. Very excited that my new bike was light enough to hold with one finger!

My brother and I grew up in a bike shop. Hanz is 10 years younger. I started the shop at age 17 in my parent’s basement. We toured and raced bikes on the plains of North Dakota. We loved everything bicycle. We learned that a bike that fit, rode well, and had the gears needed for the 30 mph headwinds of Fargo gave us a freedom to roam the land. It was emancipation for us. Hanz started building racing frames by the age of 15. I think he is a mechanical genius.

Then we wanted to ride other places that had hills and less wind!

On a dream bike trip to Europe, Hanz struggled with his bike. It is tough to travel with a bicycle. It either doesn’t fit in the car, taxi, train luggage shelf, airplane suitcase or you have to pack it and ship separately hoping it arrives in one piece at the other end. And it costs a lot extra to take it with you. In the U.S. even the trains had quit making it easy to take a bike!

During the 1970s and 80s, we both looked for a bike that was easy to travel with. A bike that still fit right and rode well and had the gears we needed. We had high hopes for a long time that someone would produce one for folks, like us, with dreams of bike travel. We didn’t find anything that fit the bill for nearly 20 years. But this backstory prepared us for our future.

I started Burley Design Co-operative (which later became famous for their child trailers) back in Fargo in the late 60’s. 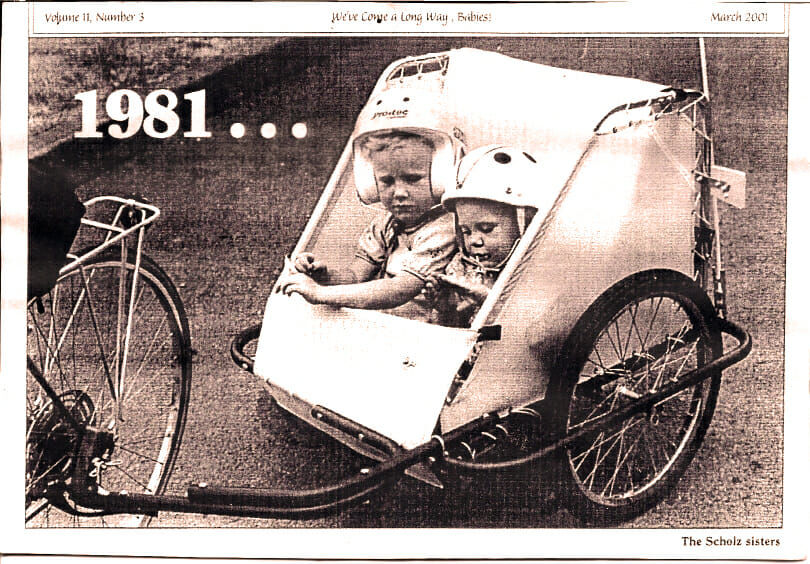 My daughters Hanna (now Bike Friday President) and Fraeda (one of Bike Friday’s builders). My personal inspirations for designing the Burley Trailer.

Later on, once I had turned Burley into a Co-operative and left, Hanz and I started building tandems for Burley.  The tandems were a joint venture of a business called ATP (Advanced Training Products – a play on words) that Hanz and I started in another story leading to Bike Friday. While we were still building tandems Hanz set a goal of fitting a bike in a suitcase and made the first suitcase travel bike prototype for himself around 1986-7. 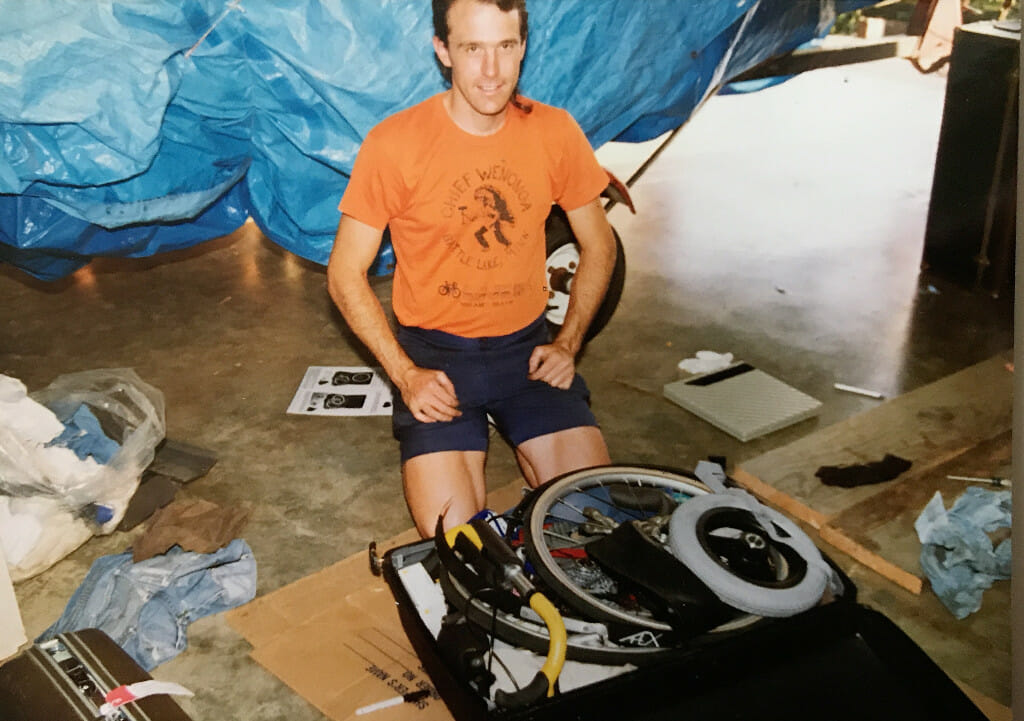 This is probably Hanz packing his first Bike Friday Sport 14 into a regular Samsonite suitcase. Notice the trailer wheel and frame is already part of the system. He did it!

The Dentist Said he Wanted One Too!

Hanz and I had a great dentist. We liked to talk to him about bikes. Who doesn’t talk bikes with their dentist? Dr. Richard Gabrial was an early Burley tandem owner.  When he came to an open house at our tandem production shop and saw the folding bike prototype Hanz had made he wanted one.  He strongly encouraged us to make them available. Yes, Dr. Gabrial was the trigger for making High-Quality Travel folding bikes for you. We owe so much to people like Dr. Gabrial who encouraged us along the way. Thank you, Richard. You are the best dentist ever! 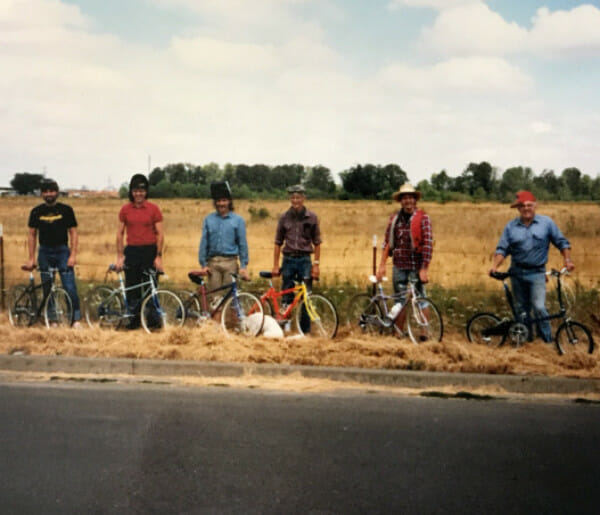 Burley Tandem building team in the late 1980’s. First Bike Friday Prototype on the far right side along with some kids bikes we were making on the side for our kids.

The bike for Dr. Gabrial was the push Hanz needed to make the second bike. And then we thought…”there are a lot of dentists in the world”, I bet other people want a bike like this too…

With the help of another early instigator, Paul Moore, planning began. Paul is another immigrant to Eugene and a fantastic guy with a terrific history. We credit Paul with the names Bike Friday from Robinson Crusoe and Green Gear Cycling which shows our green roots. Paul also wrote the famous, less than 30 words, and that boosted us into business. The ad read “NO JOKE! and ABOUT TIME!” and was placed in the back of Bicycling Magazine. Some of you remember this 1992 ad. Some of you even bought your first Bike Friday from Paul by snail mail!

So the “Sport 14” was born in a tandem shop. Two following Bicycling Magazine reviews put Bike Friday on the map. It was April Fools Day, 1992 and it was no joke! One of the reviews later in Bicycling mag said: “It rides like your best bike!” Wow! The bar was set high.

The phone started ringing. We had no idea the tiger we had the tail of.  But the bike dealers said we were nuts.”No one will pay $800 for a folding bike!”. Most folding bikes were $300 or less and not thought of as good bikes to actually ‘ride’. They were poor renditions and were nothing like well-designed travel bikes. The non-dealer people calling were excited. “It is about time” they agreed! Since folding bikes had a bad rap, we called our travel bike and the “Worlds First Suitcase Bike”.

Lots of folks, for years, did not realize Bike Friday also had the convenience of a fast folding bike. This confusion lost us lots of European sales, as they had great train service, and didn’t feel the need for an airline suitcase bike.

So Hanz and I saw we had to make a big decision. Do we design, build, market and sell it all ourselves? How would we get this bike out to all the cycling dentists and other people in the world who really needed a bike that fits, rides well, they can take with them? We could see that not only did we need to design and manufacture the bike, we would also need to market and sell it direct. Even the folks at the Burley co-op did not understand that many folks wanted a real bike with them no matter where they went. We realized we had to invent a build-to-order sales and delivery team that could sell and make a custom bike in time for someone’s (often) dream trip! 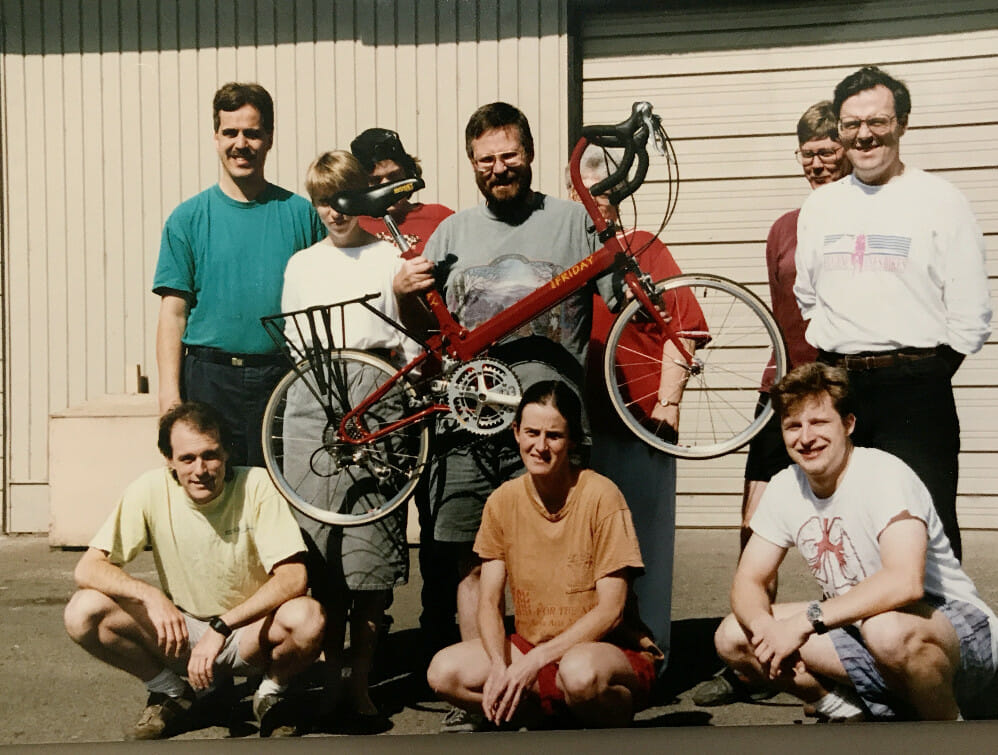 This decision was a key moment in the history of. Most manufacturers want to focus just on building stuff, and leave the selling to retailers. We decided we had to do both, as we found no selling partners who ‘got it’ as early as the customers did. It was crazy! We had very little money but decided to go for it and partner directly with our customers.  We suspected that many customers would be like Dr.Gabrial and be great new friends! It turned out to be true. Wow, what an understatement!

We were blindsided at what happened next:

Intrepid people with adventurous spirits took these bikes on rides we had never even dreamed of, all around the world. They started a community.

— Read more in the next installment coming soon!–

Do you have some early Bike Friday stories and pictures to share? Please send them to us, we would love to reminisce together. Read some customer stories on the Bike Friday Blog
There are so many incredible trips people have taken on their Bike Fridays. We love hearing back about where they have explored and how the bikes are working out. Below are just a few pictures that help inspire us to keep going and makes the struggle worth it in the rough times when the tubing order doesn’t show up or Shimano is out of those 11speed hub gears that everyone wants on their bike right now!… 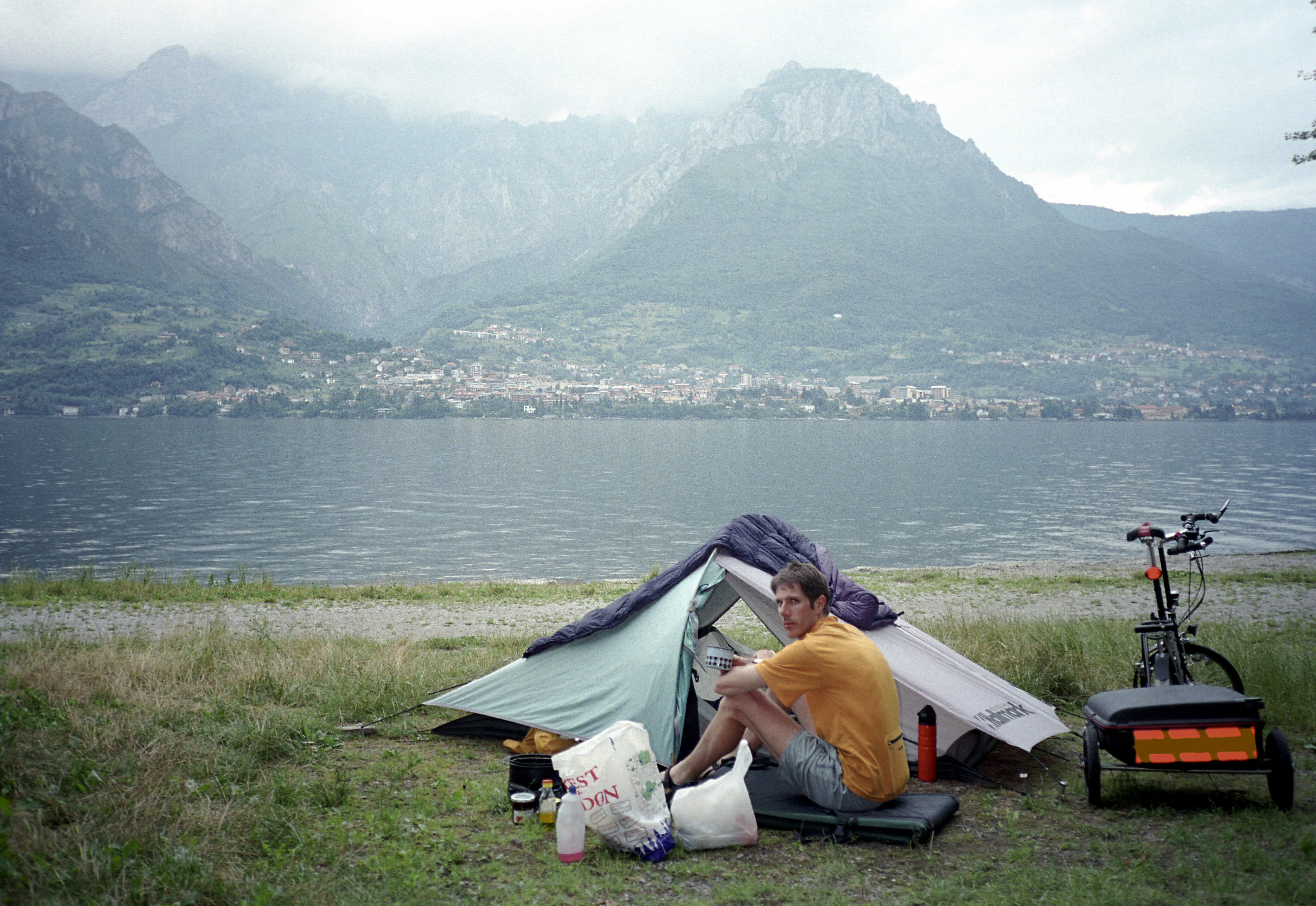 I am awestruck every time I see this picture of Carl living a dream. 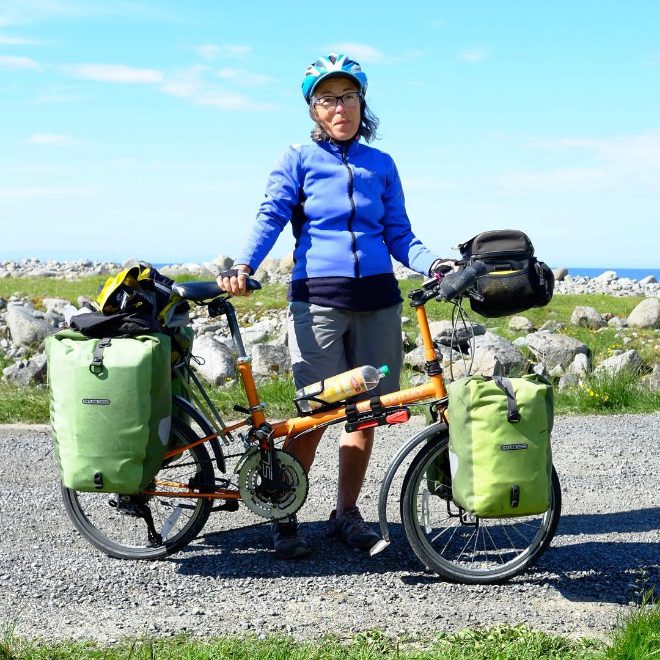 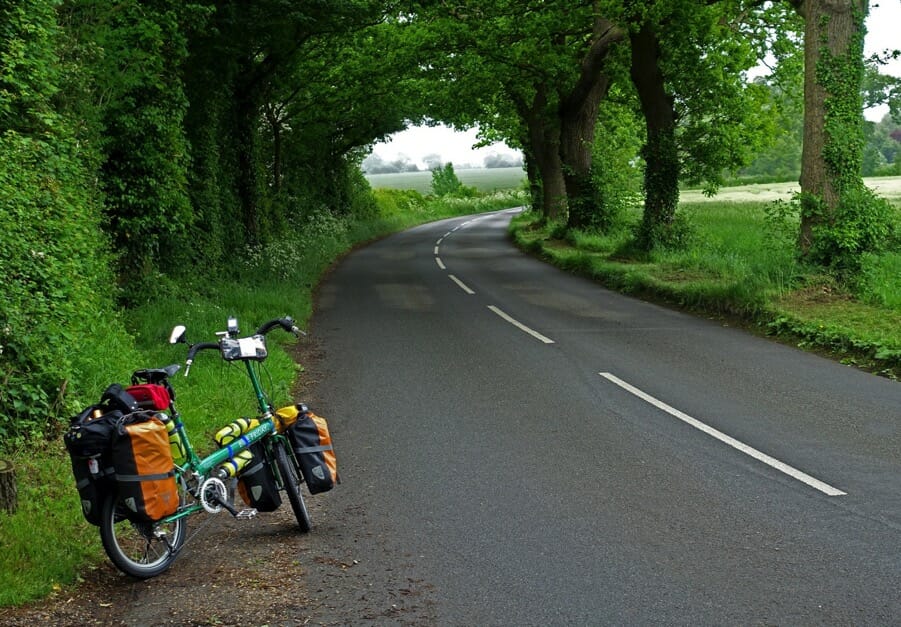 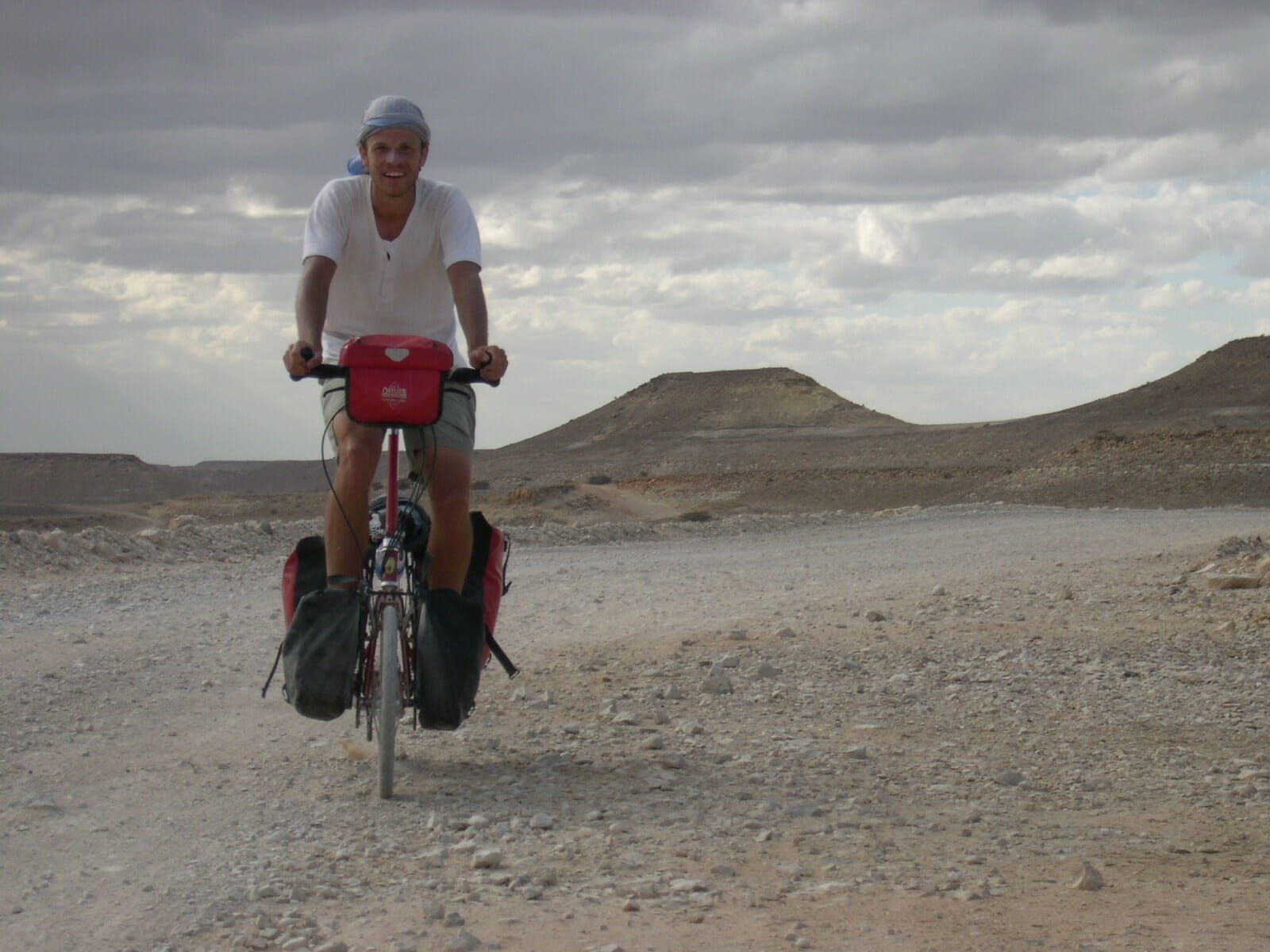 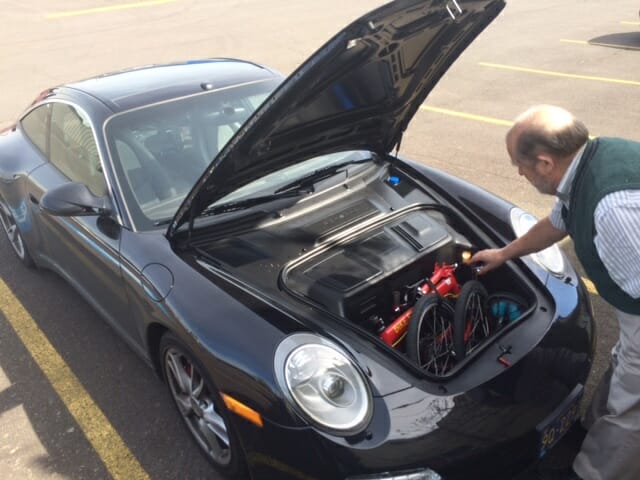 What has made the New World Tourist the most popular Bike Friday:

5 thoughts on “How the First Bike Friday was Born”