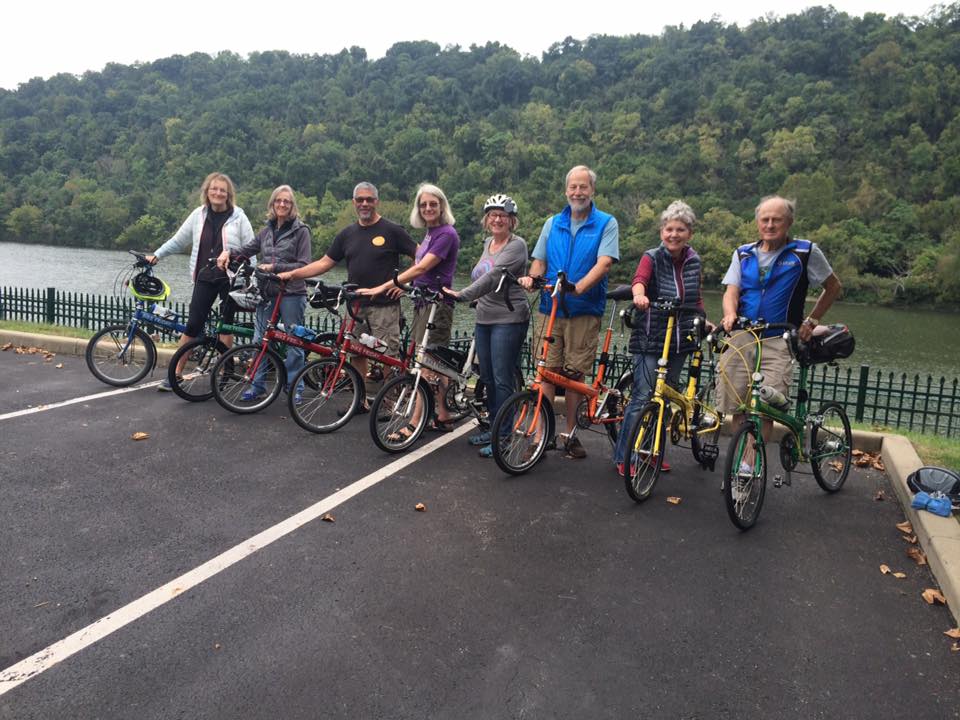 Long-time Bike Friday owner Gerda Mesiter Eck recounts how she and her friends became hooked on the travel they could do together with their Bike Fridays:

Allen Burrell and I have been doing long distance bike trips since we have retired. The first trip was a camping trip where we pulled the suitcase as a trailer, we flew to St. Louis and rode the Lewis and Clark bike route, first on the Katy trail and then with the ACA bike maps. Our destination was Omaha NE from where we took the train back to Oregon. That was about 750 miles bicycling. The first overseas trip was to Thailand and Cambodia with an outfitter we heard about on Bike Friday’s website, Pedalers Pub and Grille. That trip was excellent, the owner Tom Shehan also rides a Bike Friday. We took our bikes to Europe and pedaled the Drau River Valley in Austria, from the border of Italy to the border of Slovenia. We had people stopping us admiring our bikes, one woman who was an exchange student to Oregon in her youth and was excited that these bikes are manufactured in Oregon.

Because we belong to the Trails Club of Oregon and are very active with their bike program, we were asked to plan something for a group. In the past I organized hiking and backpacking trips, why not a bike trip. The ACA maps were used to cycle across the United States from San Diego to St. Augustine, albeit not with the Bike Friday- that was before we purchased them. So, we checked out long distance bike trails across the US. The first group ride with four Bike Fridays was four years ago. Our friends Chaz and Catherine found their Bike Fridays on Craigslist from a couple in Idaho. We flew to Nashville and biked the Natchez Trace Parkway, operated by the National Park Service, it is 444 miles from Natchez Mississippi to Nashville Tennessee. A couple years later we biked 350 miles of the Erie Canal from Buffalo to Albany NY, with an excursion through Canada and the Niagara Falls. It is mainly along the historic canal, but also has some traffic cycling included. Soon our friends Larry and Charlotte decided to look for a set of Fridays because they were so easy to pack. They also found theirs on Craigslist. The owner in Lake Oswego had died and the widow sold both (Duck colors..!!) “When will you schedule another bike trip, Gerda?” Well, a few more friends came and purchased bikes from you because they liked mine: JoAnn Klassen, Liz Perlman and Julie Dailey.

So this year a plane took us to Pittsburgh, PA and we pedaled 335 miles to Washington D.C. We had 9 riders total; 8 riders with Bike Fridays. This trail was fabulous, I was just really amazed that there is a dirt trail of this length in the busy Northeast of our country. The GAP (Great Allegheny Passage) is a rails-to-trails path, hard packed through the Allegheny mountains, in Cumberland MD it changes to the C&O Canal (Chesapeake and Ohio) a historic trail where the mules used to pull the barges. Again, the trail is dirt and the scenery is absolutely beautiful, ending in Georgetown, a suburb of Washington D.C. Views of the National monument the last half mile. Myself and a couple others kept a log on FB, mine is Gerda Meister Eck, if you would like to see the photos, as well as  comments of our family and friends.

The age of our riders is 66 to 83. We took it easy on this trip, lodging was in historic B&B’s – beautiful mansions, hostels and hotels. Dinners were wonderful, stories were plentiful, we took some time off for museums and battle fields. We had happy hour before dinner and laughed a lot.

Gerda rides a New World Tourist Lite (formerly called the Crusoe), with the BionX e-assist system. Click the links to learn more about either!